The Japanese embassy in London regularly screens films that are hard to find in the West and they are an eclectic bunch. The latest one programmed is one from the venerable director Yoji Yamada. It’s called A Class to Remember and it’s from the 1996 and was Japan’s submission to the 69th Academy Awards for the Best Foreign Language Film category but it was not accepted as a nominee (source: Wikipedia).

Here’s the information and here’s the link to the embassy’s page:

A Class to Remember 2: The Learning Circle 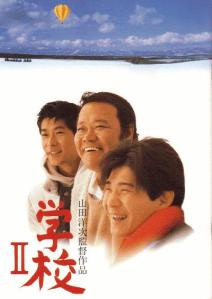 END_OF_DOCUMENT_TOKEN_TO_BE_REPLACED

Films are regularly screened at the Japanese Embassy down in London in free events and I often hear about them but never attend. That doesn’t mean I can’t help tell others about them. There are two films playing this month and the latest film to get screened is Final Take, a movie directed by Yoji Yamada in 1986. It is set in the 1930s, an era when silent movies were being replaced with talkies and everyone dreamed of being a star. Here’s the trailer:

END_OF_DOCUMENT_TOKEN_TO_BE_REPLACED

When the film opens we catch things in media res, a funeral taking place, a family mourning. A narrator, an old woman, chimes in, “After a long illness my mother died when I was five.” We discover that she is the young girl in the opening scene, her name is Ito and she is the daughter of a samurai named Seibei Iguchi (Sanada).

It is a time of famine and tumult. The end of the samurai era is in sight and we are 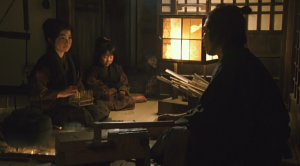 nearing the beginning of the Meiji restoration. Not that this matters to Seibei as taking care of his sick wife, two daughters and a senile mother and then paying for an elaborate funeral for said wife has left him in debt. As a result he spends a lot of time wielding a hoe instead of a sword and constructs insect cages to sell. Whenever he finishes work in the castle store house and is asked to go for a drink by co-workers Iguchi turns the offer down as he has to hurry home to look after his family, earning him the nickname Twilight Seibei (Tasogare Seibei). Not that he minds as he has lost his taste for combat and values time spent with his family.

A chance encounter with his good friend Michinojo Iinuma (Fukikoshi), who is back from a visit to Edo on clan matters, brings news that Seibei’s childhood love, Iinuma’s sister Tomoe (Miyazawa), is divorcing her husband Toyotaro (Osugi), a mean drunk who beats her. Tomoe pays Seibei a visit and it is clear that Tomoe harbours feelings for him just like he does for her. She is a natural with Seibei’s girls Ito and Kayano and brings life to his house. Tomoe’s ex Toyotaro finds it unacceptable that he is being divorced and feels humiliated so he threatens Tomoe. Seibei defends her honour and accepts a challenge to a duel with Toyotaro the next day. He easily beats his opponent and word of Seibei’s skills with the short-sword travels. It soon proves to be an asset for a faction in the clan who ask him to settle a matter of great importance. The task goes against Seibei’s new peaceful lifestyle and puts his role as a father at risk but he cannot duck his responsibility as a samurai and it may get him out of debt and even offer him a shot at winning Tomoe.

END_OF_DOCUMENT_TOKEN_TO_BE_REPLACED 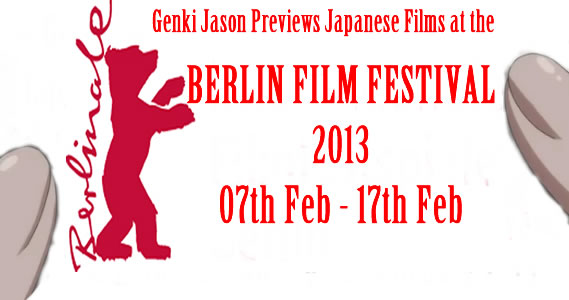 The Berlin Film Festival 2013 was launched yesterday and runs from February 07th to February 17th. The line-up of films looks pretty good with South Korea contributing titles like Nobody’s Daughter and China finally allowing us to see Wong Kar-Wai’s The Grandmaster.

I started reporting about the Berlin Film Festival last year and enjoyed it tremendously – cool pictures and awesome sounding films. I always read the Sight and Sound report on the festival and acknowledge its importance in the festival calendar since there is always a great selection of films, particularly from Asia. The Japanese line-up looks very interesting with a mix of classics, recent releases, indie titles and short films. My highlights would have to be the older films from Ozu and Kinoshita and some of the independent titles.

This post is a bit late so apologies for that but the good news is that only one of the film’s starts tonight, the rest start over the weekend or next week and there are multiple chances to view the films.

Ryota Nakano brings his award winning film Capturing Dad (released next week in Japanese cinemas) to Berlin. Award winning? Yes! It took the award for best film and best director at the 09th Skip City International D-Cinema Festival in Kawaguchi city. The festival is aimed at discovering and rewarding digital filmmakers. I have never heard of it but the trailer looks really good, highlighting a lot of drama and a little comedy in a film about the absence of a father and the creation of relationships from that loss. The film stars Makiko Watanabe (Love Exposure), Erisa Yanagi (A Gentle Breeze in the Village), Kenichi Takito (Fish Story, Fish on Land), Satoshi Nikaido (Guilty of Romance) amongst others. It plays in the Generation section of the festival.

Koharu (Matsubara) and Hazuki (Yanagi) are sisters who live in a rural town with their mother Sawa (Watanabe). The father abandoned the family for a new woman fourteen years ago which has caused huge resentment in Sawa but when she discovers that he has terminal cancer she sends Koharu and Hazuki to the hospital with a camera to take a picture of him. When they arrive at the hospital he s dead and his new family are in mourning. Koharu and Hazuki both discover things about their father and their step-family. 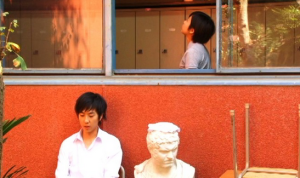 Slow-cinema? Town of Whales is the directorial debut of Keiko Tsuruoka and she has made an observational drama that captures the drifting days spent during a summer holiday by three teens who are discovering the joys of discovering things emotional and physical with something of a fragile love triangle developing. The film apparently lacks dramatic structure but “the film doesn’t need one either. Moments are all that count, and each one has its own special significance”. Japanese women directors performed admirably at last year’s festival with Our Homeland and Just Pretended to Hear being major stand-outs (the latter winning as award) so I am eager to find out how this one plays!

Machi, Tomohiko and Hotaru are high school students Machi’s brother disappeared six years ago and she misses him terribly. The three set off to track him down.

Atsushi Funahari was at last year’s Berlin Film Festival with his documentary Nuclear Nation which looked at nuclear power after the 2011 Tohoku earthquake and tusnami. This drama is another one that deals with the disaster but looks at the economic and emotional impact as felt by a group of workers at a factory. From the synopsis it sounds perfect for an audience who like tough subject matter. Atsushi Funahari has tackled interesting relationship dramas before with the US set Big River, this one looks a lot more local but just as epic due to the subject matter. It stars a collection of new and old actors like Asami Usuda (The Woodsman & the Rain), Takahiro Miura (Ninja Kids!!!), Yurei Yanagi (Boiling Point, Ring) and Taro Suwa (Cold Fish, Himizu). The film will get a release in April 2013.

Ever since the tsunami struck the workers of a metal factory in the industrial town of Hitachi have been in something of a malaise, the only thing keeping them afloat being a skilled worker named Kenji (Takahashi) who has secured them a contract. Then he dies on the first day at the client’s site. His colleague Takumi (Miura) is responsible and the factory worker turn on him, taking sides with Kenji’s widow Shiori (Usuda) but her hatred turns to love.

Last year’s Berlin Film Festival featured lots of documentaries that used the Tohoku Earthquake and Tsunami as a subject but the topic will not go away as Japan is still rebuilding after the disaster and for many the destruction ran deeper than material goods as lives were lost. This documentary follows a woodcutter and carpenter named Naoshi whose house managed to withstand a lot of damage wrought by the tsunami. Unfortunately he lost his son. Naoshi is determined to rebuild his house and live the remaining days of his life there. Things are not so simple as his wife has misgivings, local authorities impose construction restrictions and his prostate cancer has only recently gone into remission. The festival page describes it as a “ tender portrait of a quietly stubborn man opens out into a complex study of the many ambivalences the reconstruction process brings with it: a tangled web of family duty, traditional customs, community spirit and municipal legislation.” It goes on theatrical release next week in Tokyo.

Playing in the Berlinale classics thread of the festival, Tokyo Story is considered one of the all-time great films and it came top of Sight & Sound’s magazine directors’ poll of the greatest film of all time. I have only seen some of Ozu’s films like. This counts as one of the ones I have not seen and it is not because it is bad but because it is brilliant as this review points out and I want to give it the respect it deserves by watching it at the right moment because the ones I have watched have been nothing but brilliant humanist dramas. Anyway, the lucky folks who are at the Berlin Film Festival get to watch it on the big screen. It stars familiar Ozu actors Chishu Ryu and the flower of post-war Japanese cinema Setsuko Hara who both appeared in the wonderfully gentle and touching drama Late Spring. The festival describes it as telling “the story of family estrangement and the isolation inherent in modern society.” This is copious tear fuel if I know Ozu…

When the Hirayama couple travel from their small and quiet hometown of Onomichi to the hustle and bustle of Tokyo they discover that their children consider their presence an inconvenience and uncomfortable truths about the reality of life in Tokyo are revealed. It is only their daughter-in-law Noriko, the widow of their son who went missing in the war, who spends time with them but when the mother of the family is taken ill they stop at Osaka where another of their sons lives.

Tokyo Family was released last month in Japan and the festival website describes it as a something of a tribute to Yasujiro Ozu. The director Yoji Yamada who is a very familiar name having helmed The Twilight Samurai, The Hidden Blade and Love and Honour was an assistant on Ozu’s most famous film Tokyo Story. This is an update to the classic but with very few departures so the story is a quiet observation of family, the generation gap and modern life as depicted through an elderly couple who visit their children in Tokyo and find them too busy.  The film clocks in at over two hours and is packed with a variety of names like Yu Aoi (All About Lily Chou-Chou, Mushishi, Hula Girls), Jun Fubuki (Séance, Rebirth), Yui Natsukawa (Shikoku, Still Walking), Satoshi Tsumabuki (For Love’s Sake, Villain) and Chika Arakawa (Apartment 1303).

Shukichi Hirayama (Hashizume) and Tomiko (Yoshiyuki)are an old married couple who live on a small island in the Inland Sea. When they visit their children in Tokyo they see the successful lives they have built for themselves. Eldest son Koichi (Nishimura) runs a hospital, Shigeko (Nakajima) runs a beauty salon and Shuji (Tsumabuki) works in the theatre and plans to marry Noriko (Aoi). The parents find that life in Tokyo is not for them and want to go home but a medical emergency strikes when Tomiko collapses.