The award-winning novel/live-action film The Great Passage (2013) is getting an anime adaptation which is due to air in October this year as part of Fuji TV’s Noitamina. It is being animated by Zexcs (Aku no Hana) and directed by Toshimasa Kuroyanagi (director on Say “I love you.”) and the series scripts are being overseen/written by Takuya Sato (writer/director on NieA_7 and Strawberry Marshmallow and storyboard artist on And Yet the Town Moves and Kino’s Journey). The big name for a lot of anime fans isn’t necessarily the writer/director but the character designer/manga author Haruko Kumota who won fans for her series Showa Genroku Rakugo Shinjuu.

My review was super positive on how good the movie is and that went on to clean up at the Japan Academy Awards 2014. The anime looks classy and mature so I’m hoping to enjoy it as my re-entry into the world of anime after three months off.

END_OF_DOCUMENT_TOKEN_TO_BE_REPLACED 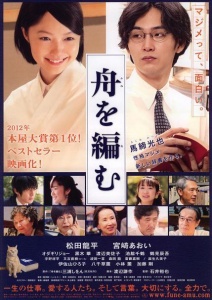 The year is 1995 and the place is the Dictionary Editorial Department of the publisher Genbu Books. The staff include Matsumoto (Kato), a veteran editor in chief of dictionaries who is assisted by his key right-hand man Araki (Kobayashi), a skilled editor who is on the verge of quitting because his wife is ailing and he wants to be by her side. Also in the department are Sasaki (Isayama), the oil for the team ensuring that word entries are logged on computers and filed away and young blade Nishioka  (Odagiri) who, while not as is good at defining words, is a pro at getting more up to date definitions and examples because he has skill with human contact.

And that’s it for the dictionary team. All dedicated to the beauty of words but considered weird by the rest of the staff at the publisher. Fact of the matter is that compiling dictionaries is not hot shot work in publishing terms because such things are boring and costly in an age when digital technology is coming to prominence and everybody else would rather work on glossy magazines.

With Araki seeking to retire it places great strain on the department at a time when Matsuoka wants to initiate a new project called The Great Passage, a 240,000 word dictionary that will capture everything from the most current youth slang to the most technical terms of different fields like theatre and literature making it the most comprehensive and representative dictionary in the country.