I’ve had a busy week of constant travelling between cities and trying to get back into reading books. I reviewed two Edmund Yeo films, River of Exploding Durians and Aqerat. I watched some Italian horror movies and posted reviews for the documentary Towards A Common Tenderness and the Nobuhiko Obayashi drama Hanagatami. Also, the lead picture is awesome.

I hope you had a good week.

END_OF_DOCUMENT_TOKEN_TO_BE_REPLACED 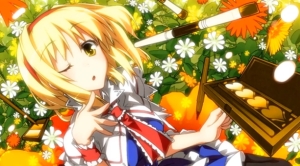 What did I do this week? Well I’ll tell you whether you’re interested or not. A post for the release of For Love’s Sake and a Competition to go to Hong Kong thanks to the lovely folks at the Terracotta Far East Film Festival. I took part in an interview with fellow cineblogger Lost in the Miso and I watched a lot of anime (more first impressions next week). No films. I am gearing up for the Terracotta Far East Film Festival with four films (three Japanese and one Korean) on the cards. I need to write a preview for this festival. I still need to write to reviews from the last film festival I attended. There are a lot of things I need to do and all of that will have to wait until I pass my Japanese exam next week.

What does the Japanese Movie Box Office Chart look like for the weekend May 04th-05th.

No new entries in the top ten but it is encouraging to see The Great Passage hanging in the top ten. Detective Conan retains the top spot for the third week in a row, Library Wars and Shield of Straw round out the top five in their second week out.

What is released this week? A lot more than the paltry two titles of last week! 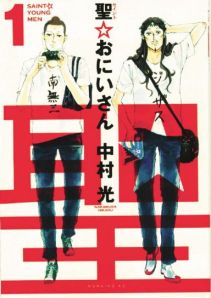 Tokyo and experienced life as humans in Japan. This is the concept of Hikaru Nakamura’s manga and it sounds amusing enough and it now has an anime film. The staff are experienced. Noriko Takao has worked as an episode director on gag anime K-ON! And Lucky Star. The screenplay comes from Rika Nezu who wrote for the live-action Kimi ni Todoke. There are great actors fulfilling the roles of seiyuu. Mirai Moriyama (The Drudgery Train) voices Jesus and Gen Hoshino (Why Don’t You Play in Hell?) voices Buddha. The animation is very gorgeous and detailed and the character designs are great, check out the trailer.

Masatoshi Akihara, director of the rather amusing looking Lupin no Kiganjo (2011) is directing an adaptation of Shimizaki Fujimura’s novel of the same name which charts the fortunes of members of two families in the Kiso area of Nagano prefecture, one of which runs a brewery which will pass to a daughter and the other which is more humble and consists of teachers. It stars Tomomi Matsuda (Life on the Longboard), Yoji Matsuda (The Girl Who Leapt Through Time, The Hidden Blade), and Anri Ban (Go, Tokyo Rhapsody). To be quite honest the trailer didn’t interest me in the least but I am thankful I did the research because that Lupin film (ルパンの奇巌城) looks very amusing! 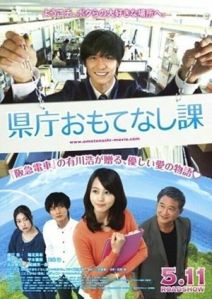 Anime fans will know that prefectures in Japan are falling over themselves to use anime to promote their regions. Well here’s an example of a film doing it. The film trailer looks dull, like an advertisement for the locations (it was shot mostly in Koichi prefecture) with some light drama thrown in and so I was eager to get to the end of it and watch something else. Script comes courtesy of Yoshikazu Okada who wrote Space Travelers. The cast looks pretty, the ones of note for me are Mari Horikita who was one of the brighter aspects in the J-horror films The Locker 1 and 2 and One Missed Call Final, Kengo Kora who was in Norwegian Wood, The Woodsman & the Rain and The Drudgery Train and Megumi Seki (The Foreign Duck, Christmas in August). It’s nice to see Horikita moving on to better films with bigger bugets.

Koichi prefecture needs to promote itself for tourism purposes so who are they gonna call? The hospitality division, that’s who.

Or so you might think but there’s a strict rule banning advertisements so a popular writer from Koichi named Kyosuke Yoshikado (Kora) is appointed as the special envoy for tourism in the area and has the help of hospitality division employees Fumitaka (Nishikido) and Taki (Horikita).

So what’s the plan? Well Kyosuke is pointed in the direction of Seien, a former employee of Koichi Prefecture who was fired when his plan to import pandas fell apart. When Fumitaka and Taki visit Seien they get a frosty welcome (more like a bucket of water thrown at them) from Seien’s daughter Sawa (Seki). Can this group work together?

Phone Call to the Bar 2

The sequel to the popular and, according to a friend who saw it on a flight from Japan, rather entertaining Phone Call to the Bar! This is based on Naomi Azuma’s 2001 novel and it has quite the cast. Yo Oizumi, Ratman in the Gegege no Kitaro films, the impossibly handsome Ryuhei Matsuda, star of The Foreign Duck and Nightmare Detective, Yutaka Matsushige, the scary killer in The Guard from the Underground, Mariko Tsutsui who was in One Missed Call, Atsuro Watabe who looked effortlessly cool in Heat After Dark, Machiko Ono who was in Eureka and Tomorowo Taguchi who was the eponymous protag in Shinya Tsukamoto’s Tetsuo: The Iron Man. This trailer looks pretty damn awesome actually wth Ryuhei Matsuda mixing it up in the action department and Atsuro Watabe looking like a political slickster. Some pretty good humour emerges as well. Trailer of the week.

Masako (Gori) is a magician at a Japanese pub and s friends with a Private Detective (Oizumi). When Masako dies at a magic show convention, private detective and Takada (Matsuda) begins investigating and find that Gori may have been involved with political figures. As this rumbles on, a woman who has been following the private detective consults him with a mystery of her own.