Third Window Films will release Takeshi Kitano’s brilliant coming-of-age drama Kids Return (1996) at the end of October. This is the latest film to be released on Blu-ray by Third Window Films thanks to Office Kitano updating their titles with 2K masters.

Regular readers will know that I have reviewed Hana-bi and Kikujiro and Dolls, but I missed the last release, A Scene at the Sea.  This is the second film he directed but does not star in after A Scene at the Sea (1991) and much like that one, it is one of his best as it charts the relationship between two friends at high school who face tough choices in life. It has an excellent story and a fantastic soundtrack by Joe Hisaishi. Here’s a track.

Here’s some information from the press release:

END_OF_DOCUMENT_TOKEN_TO_BE_REPLACED

Although Sion Sono started making films back in 1987 it was 2002’s Suicide Circle which truly put him on the map with its mix of black humour, social observation, and an audacious opening in which a whole bunch of commuters at Shinjuku station get soaked in a whole lot of gore.

25th May, Shinjuku Station. The place is packed with commuters waiting to go home. Nobody takes any notice of the fifty-four smiling school girls who gather at edge of a platform as a train approaches until they link hands and jump in front of that train. This is the start of a wave of suicides that strikes Tokyo which coincides with the emergence of a J-Pop group named Dessert. The police are uncertain as to whether this is suicide or an accident but when a mysterious phone call from a hacker named ‘the Bat’ tips off Detective Kuroda (Ryo Ishibashi) about a suspicious website (maru.ne.jp) that tracks the suicides before they actually happen the police begin to investigate.

Sono’s films regularly examine issues surrounding identity in modern Japan. These issues have long been a source of ideas since his earliest films which regularly focussed on outsiders. He usually explores these issues using genre frameworks like comedy (Love Exposure), crime (Cold Fish/Guilty of Romance), and melodrama (Himizu) and sometimes he combines genres, which makes his films wildly unpredictable. Suicide Circle can be counted as his horror picture as we get familiar genre trademarks amidst his exploration of identity and suicide.

Hey let’s all kill ourselves!

One can watch Suicide Circle and exult in the glorious black humour and horror since it features many absurd situations and grisly death scenes with copious amounts of gore and blood splashed around¹ but for Sono the real horror is what drives people to commit suicide and the existential crises that modern people face.

END_OF_DOCUMENT_TOKEN_TO_BE_REPLACED 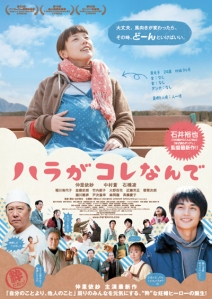 Mitsuko (Naka) is nine-months pregnant, broke and alone in Tokyo. Her parents (serial failed entrepeneurs) think that she’s in America with the baby’s GI father but she’s actually in dire straits as she is forced to move out of her apartment. Despite all of this she remains positive and believes that things will turn out alright. She doesn’t know where she will go but decides to hop into a taxi she cannot pay for and follows a cloud back to the ramshackle working-class alley where she grew up. This place is a relic from the past and it has had the life sucked out o it with the departure of many of its residents, but Mitsuko’s infectious get-up-and-go attitude soon compels the remaining locals to roll up their sleeves and restore the alley to its former glory.  Mitsuko has so much to do and so little time before her baby arrives but she will find a new assertiveness and help those floundering around her.

END_OF_DOCUMENT_TOKEN_TO_BE_REPLACED

I have one particular blind side when it comes to Japanese movies – adaptations of TV shows. Despite a half-hearted attempt at watching the live-action Arakawa Under the Bridge I have not really given much though to other television shows. If I’m going to understand the Japanese movie industry better then I must investigate Japanese television beyond anime. I already know what my first two shows will be: Keizoku and Keizoku 2: SPEC. The reason I mention this now is because today’s trailer is based on the TV series: Anti-Terrorism Investigators. In the cast are Atsuro Watabe who was the in Sion Sono’s magnificent Love Exposure and Ryo Ishibashi who appeared in Audition and The Grudge.

When Japan is hit by the 2011 Tōhoku earthquake and tsunami it falls into chaos. The disaster coincides with news from the CIA that uranium is being smuggled in Japan. Kenji Sumimoto (Watabe) is part of the foreign affairs division of the Tokyo Metropolitan Police. A detective with the willingness to bend the rule, he finds himself handed a hot case when sensitive documents and enriched uranium go missing following the disaster. His mission is to uncover the truth of the smuggling operation which stretches to the Korean peninsula. His one lead is Kaori Okuda (Maki), the wife of a businessman thought to be a spy. He will soon be joined by an undercover Korean policeman named Ahn Min-Chul (Kang-Woo) in what will become an explosive adventure.

After watching Yuya Ishii’s 2010 film Sawako Decides I was struck by how his sharp script led to humorous and truthful observations of human nature while his naturalistic direction gave the actors ample room to bring out great comic performances so it was something of a surprise when I found Mitsuko Delivers a shallow experience.

Mitsuko (Naka) is a young woman who is nine-months pregnant, broke and alone in Tokyo. Her parents think that she’s in America with the baby’s GI father but she’s actually in dire straits as she is forced to move out of her apartment and yet she remains positive and believes that things will turn out alright. She hops in a taxi follows a cloud back to the ramshackle and destitute working-class alley where she grew up and finds her arrival and her get-up-and-go attitude soon compel the locals to roll up their sleeves and restore the alley to its former glory. Soon, old sweet-heart Yoichi (Nakamura) and his uncle Jiro (Ishibashi) find their restaurant reinvigorated and old landlady, Kiyo (Inagawa) remembers that Mitsuko was always absent-minded.

Mitsuko is not as saccharine sweet as most “home dramas”, its gentle surrealism gives it an edge but it does not imbue it with a vivid identity of its own. Although we get themes such as the importance of family and a championing of back to basics communitarianism of the past, it is put through Ishii’s filter of quirky, satirical humour. The tenement Mitsuko returns to is an old fashioned place (the only place that survived an air raid during World War II). It is an environment engineered to evoke nostalgia but there is an unexploded bomb lurking to keep things interesting. While the characters’ exist in the reality of a country undergoing economic hardship and wallowing in the past they are stylised, aimed at selling the message that “now more than ever we have to help each other and face the future.”

Adding to the slyly rebellious feel is our protagonist Mitsuko who isn’t your stereotypical good Japanese girl – forceful and adventurous, she doesn’t have much common sense but overflows with confidence. She radiates a good nature, living with the belief that she has to “be cool” and help those in need even if they don’t want help or it hurts her. She allows herself to become an object to help others – maid, life-coach – and finds herself aiding life’s losers. That someone in a situation like hers forcefully brings comfort to people who would look down on her provides most of the comedy and life of the film.

END_OF_DOCUMENT_TOKEN_TO_BE_REPLACED

Third Window Films is giving Yuya Ishii’s “Mitsuko Delivers” a UK theatrical release. It opens at selected regional cinemas and the Institute of Contemporary Arts where it will play through until May 24th. For tickets and show times at the ICA visit their site. 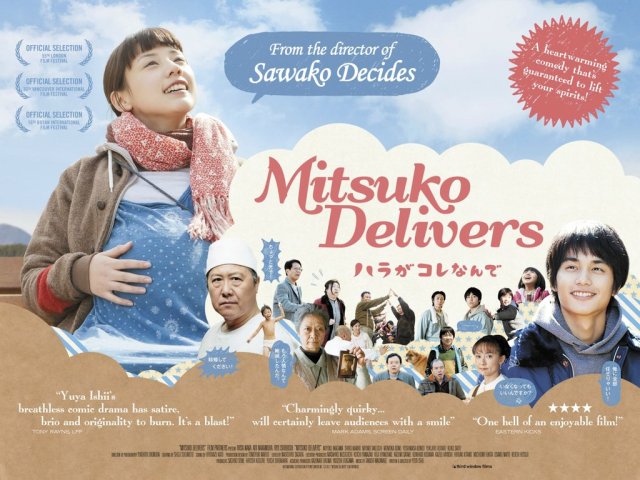 Mitsuko (Naka) is a young woman who is nine-months pregnant, broke and alone in Tokyo. Her parents (serial failed entrepeneurs) think that she’s in America with the baby’s GI father but she’s actually in dire straits as she is forced to move out of her apartment and yet she remains positive and believes that things will turn out alright. She doesn’t know where she will go but decides to hop into a taxi she cannot pay for, and follows a cloud back to the ramshackle working-class alley where she grew up. The place reeks of destitution and bone idleness, but Mitsuko’s infectious get-up-and-go attitude soon compels the locals to roll up their sleeves and restore the alley to its former glory.  Mitsuko has so much to do and so little time before her baby arrives but she will find a new assertiveness and help those floundering around her.

END_OF_DOCUMENT_TOKEN_TO_BE_REPLACED

Third Window Films delivered a devastatingly brilliant one-two of news with the announcement that they have acquired Sion Sono’s Himizu and Yuya Ishii’s Mitsuko Delivers. I have been following Himizu for a while now and I am a recent convert to the school of Yuya Ishii’s humanistic comedies after watching Sawako Decides a witty and charming satire of modern Japanese society so let me put out what is known about the films so far.

I only heard about this when I did a little coverage of the BFI London Film Festival where the film was playing. It stars Ryo Ishibashi, a familiar face from many Miike Takashi works including Audition, as well as Takeshi Kitano films like the brilliant Kids Return and Brother. I’m familiar with the lead actress through her work in the anime Summer Wars and The Girl Who Leapt Through Time  Aoi Nakamura was one of the actors in the Third Window Films release  Quirky Guys and Gals.

Mitsuko (Riisa Naka) is a young woman who is nine-months pregnant, broke and alone in Tokyo. Her parents think that she’s in America with her boyfriend but she’s actually in dire straits as she is forced to move out of her apartment and yet she remains positive and believes that things will turn out alright. She doesn’t know where she will go but decides to revisit her past including a boy who had a crush on her (Aoi Nakamura).

END_OF_DOCUMENT_TOKEN_TO_BE_REPLACED

If you haven’t seen this film or read the book do not read any reviews, just watch the film. Warning: this is a long and rambling review.

The most memorable thing about Audition is the ferocious final thirty minutes which helped to establish the notion of Extreme Asian Cinema in the west and Takashi Miike’s skill for violence and grotesque horror (it also remains memorable because my Japanese teacher is fond of imitating dialogue). What is forgotten is this film showcases Miike’s brilliance when restrained and disciplined by a script with believable characters.

Since the death of his wife Ryoko seven years ago, film producer Aoyama(Ryo Ishibashi) has raised their son Shigehiko alone. The two live a happy life but Shigehiko notices his father looking worn out so asks “why don’t you marry again?” Aoyama is taken with the suggestion but is unsure how to approach remarrying. His friend Yoshikawa, a film producer, suggests staging an audition to find a girl aged between 20-35 for a role in a film that is unlikely to be made. The plan is Aoyama won’t marry the successful girl but the audition will uncover gems. Despite misgivings over the process, Aoyama proceeds and discovers ex-ballerina Asami(Eihi Shiina) and falls for her. After initial contact, she warms to his advances and Aoyama becomes increasingly infatuated with her fragile nature and beauty ignoring the dark side to the girl of his dreams.