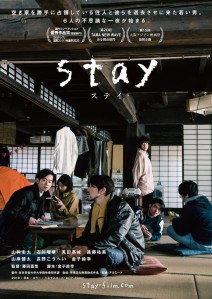 Stay, by director Naoya Fujita, has been screened at the Tama New Wave Festival, Skip City D-Festival and the Osaka Asian Film Festival which is where I saw it as part of the package of films supported by the Housen Cultural Foundation, an organisation which provides financial backing to students in graduate schools across Japan. The inspiration for the story comes from the time when Fujita encountered a traditional Japanese-style home and was immediately taken with it, imagining what it would be like for a community to form around it and this idea evolving into one asking the question of what constitutes a family.

My final interview at the Osaka Asian Film Festival 2020 was with Mayu Akiyama and Urara Matsubayashi for the festival’s closing film Kamata Prelude.

produced as well as took a lead role. She gives a portrayal of a struggling actress named Machiko who lives in the Kamata area of Tokyo. A four-part omnibus film, each section revolves around her in some way and aims to depict what it means to be a “woman” and an “actress” in society, but they are done in the unique style of each of the four directors.

Two of the directors are guys you may have heard of if you follow film festivals. Book-ending the film are Ryutaro Nakamura, whose works like Plastic Love Story and Silent Rain are full of lyrical imagery, and Hirobumi Watanabe, who has built a filmography based on his stories all being set in his native Tochigi prefecture and shot with distinct monochrome visuals while being shot-through with dry humour. The newer directors are two young women, Yuka Yasukawa, one of a number of emerging talents tapped to helm a section in the omnibus film 21st Century Girl, and Mayu Akiyama, whose debut work, Rent a Friend, won the MOOSIC LAB Grand Prix and was screened at the Tokyo International Film Festival 2018.

While Watanabe and Nakamura made sections that are delightful reveries about life and a love of movies/culture (albeit, tinged with melancholy in Nakamura’s case), Yasukawa and Akiyama provided subjects that feel more keyed in to the thorny issues of life as a young woman. Yuka Yasukawa gives a #MeToo story wherein Machiko goes to a casting call and finds herself facing a grossly exploitative panel of guys alongside a defiant fellow actress played by Kumi Takiuchi (It Feels So Good, Greatful Dead). Meanwhile, Akiyama’s section felt like a realistic depiction of a get-together of girls wherein false masks and the anxieties that women bear in society are exposed in an onsen in Kamata. This section is full of great actresses who are making waves in the entertainment world like Mayuko Fukuda (Good-Bye) and an especially acerbic Sairi Ito (Love & Other Cults).

Sat with Matsubayashi and Akiyama at a rooftop bar, I enjoyed a lively talk with two intelligent and resourceful creatives who I felt would be making big things in the future. Their film is a refreshingly hip and contemporary set of stories where its unique approach to style and subject-matter rendered their address of important issues enjoyable, nuanced, and relevant for our age.

This interview was done at the festival and via email with their help and the invaluable help of Takako Pocklington who translated and added some interesting comments.

END_OF_DOCUMENT_TOKEN_TO_BE_REPLACED

My final interview at this year’s Osaka Asian Film Festival (OAFF) was with director Anshul Chauhan. We had first met at OAFF 2018 when he participated an interview following the Japanese premiere of his debut feature Bad Poetry Tokyo. This year, he was back with his sophomore feature Kontora, which came to Osaka after having won the Grand Prix for the best film and the award for Best Music (for composer Yuma Koda) at the Tallinn Black Nights Film Festival a few months earlier.

Kontora was one of the stand-outs of OAFF 2020. Majestically shot in black and white, it’s bursting with feelings of discontent felt by the main character, high school girl Sora (Wan Marui). Drifting away from her distant father (Taichi Yamada) and living in a dull town, she finds hope in her recently deceased grandfather’s wartime diary after her beloved relative passes away as she finds clues to some “treasure” buried in a forest. Just as a treasure hunt starts, a mysterious vagrant (Hidemasa Mase) appears in town. Mute and walking backwards, he is a strange sight but his presence forces a change in the relationship between daughter and father. A strange family drama unfolds with a tone halfway between elegiac and angry with a sheen of mystery and history linked to the “treasure” and family dynamics that rope in a greedy uncle (Takuzo Shimizu) and a cousin named Haru (Seira Kojima).

Chauhan and his wife, the film’s producer Mina Moteki, sat down to talk about the film and explain more about its creation, the work put in by the actors and his wider film career. This interview was first conducted at the Osaka Asian Film Festival and then via email and has been edited for length.

END_OF_DOCUMENT_TOKEN_TO_BE_REPLACED

A lonely teenage girl enduring adolescent turmoil amidst a fractured family’s feud, finds the arrival of a mysterious mute man in her small town allows her to communicate with others. This is the story for Anshul Chauhan’s sophomore feature following his woman-on-the-verge-of-a-breakdown indie drama Bad Poetry Tokyo (2017). Kontora has different atmospherics thanks to its look, raw performance of its lead actress, its generation-spanning story and its touch of the supernatural, so that this film stands distinct from what is normally churned out in Japan in its depiction of contemporary girlhood.

END_OF_DOCUMENT_TOKEN_TO_BE_REPLACED

Bleached Bones Avenue is director Akio Fujimoto’s follow-up to his drama Passage of Life (2017). It is another film that looks at the shared links between Japan and Myanmar but this time, instead of a family drama, it is unearthing history.

Deep in the hills of Myanmar’s Chin state, Fujimoto and his crew met with a group of people who are dedicated to recovering the bones of Japanese soldiers who died during the Imphal campaign. It was a reckless attack by poorly supplied soldiers who were forced into a gruelling retreat through tough terrain and severe monsoon rains. Beset by malaria and dysentery, a lack of food and medical supplies, many men became sick and many perished, their bodies decomposing in the places they fell. The route they took became known as Hakkotsu Kaido, Bleached Bones Avenue in English. The local hill tribes who experienced these events have passed on their memories to their descendants who Fujimoto and his crew observe for this 16 minute film that connects past and present in a unique way.

The film’s director Akio Fujimoto, actor and cinematographer Kentaro Kishi and producer Kazutaka Watanabe sat down to discuss their work and went into fascinating detail.

This interview was conducted with the help of Kazutaka Watanabe’s lively interpretation.

END_OF_DOCUMENT_TOKEN_TO_BE_REPLACED

Screened at the Osaka Asian Film Festival 2020, Bleached Bones Avenue is the latest title from director Akio Fujimoto and, on the face of it, this short is a curious follow-up film to his previous work, the family drama Passage of Life (2017), which was shown at the festival back in 2018. However, it continues to examine the human links between Japan and Myanmar in its own unique way.

Fujimoto’s latest film takes place in Myanmar’s Chin state and observes the work of a team from the Zomi tribe who recover the remains of Japanese soldiers who died during the battle of Imphal. We watch as these men, each clad in simple tracksuits, hoodies and t-shirts, prepare for their work then travel by SUV to some remote area. A stream of sequences flow by where the action consists of the team traversing steep mountains, dense with trees, where they dig with simple tools. The only sounds are of bird cries, the voices the men and the tools they use as they gouge out chunks of earth in the hope of bones surfacing from the past. Although the environment looks as if it has remained untouched by human hands, the scars of war are gradually unearthed. This is most potently evidenced in the memories of wartime atrocities passed on from older members of the team to the younger ones and the wreckage of a tank which forms the focal point of a valley. As with the digging, human connections resurface from the river of time and the natural landscape.

END_OF_DOCUMENT_TOKEN_TO_BE_REPLACED

Kentaro Kishi is a multi-hyphenate talent who works as a writer, director, cinematographer and actor and his efforts stretch across genres, from splatter movies like Tokyo Gore Police and The Machine Girl (2008) to indie dramas The Sower (2016), Noise and Passage of Life (2017). As a director, his credits include Record Future (2011) and Hammock (2018), the latter of which played at the Osaka Asian Film Festival 2020 where it won the Housen Short Film Award. Here, Kishi takes on many roles and recruits his family to create an intimate 30-minute short drawing on the different perceptions in their relationship to examine how the act of looking can reinforce the connections between people.

END_OF_DOCUMENT_TOKEN_TO_BE_REPLACED

Reiko and the Dolphin

Pink film director Shinji Imaoka delivers a downbeat indie drama that has its roots in the 1995 Great Hanshin-Awaji Earthquake. Written at the time of the disaster, Imaoka had just made his debut as a film director and wanted to capture the atmosphere and emotions of the situation but no production company would provide backing. It wasn’t until 2016 when Imaoka received funding from one of his fans that he could initiate the project. He began shooting his script in January 2017, finishing it in time for the 25th anniversary of the disaster. The result is a melancholy film that follows the travails of regular people left reeling from tragic caused by the earthquake.

END_OF_DOCUMENT_TOKEN_TO_BE_REPLACED

One of the highlights of the Osaka Asian Film Festival 2020 was VIDEOPHOBIA, the latest work of Daisuke Miyazaki. A frequent visitor to Osaka, many of his works are youth-focused, with Yamato (California) (2016) and Tourism (2018) being screened at the festival. His films frequently capture the cultural zeitgeist for young people as young women with smartphones navigate various issues to carve out their own niche in the world. Yet VIDEOPHOBIA comes completely out of left-field as it’s an existential horror movie where technology drives a young woman into a fog of paranoia and fear.

Filmed around the less well-known areas of the city of Osaka and shot in black and white, it is a deeply unsettling experience as we witness melancholy 20-something Ai (Tomona Hirota) have a one-night stand with a stranger only to discover that a highly explicit sex-tape has been made of the encounter. It is a shocking discovery that plunges her into a panic that gets worse the more technology manipulates and alters her perception of herself. Things get so bad that she begins to question her own sanity and identity, realizing that the only way to rectify her situation is through total dissolution of her character. The audience is prompted to think about various social issues as Miyazaki pries apart the cracks in contemporary life and how incessant exposure to technology alters how we perceive ourselves. Full review here.

Miyazaki sat down to discuss the making of the film, the real-world topics that form the basis of the story and how he hopes the audience will engage with it amidst the ironies of our always-connected social media landscape.

END_OF_DOCUMENT_TOKEN_TO_BE_REPLACED

There are few filmmakers capturing the zeitgeist of youth culture like Daisuke Miyazaki. His characters, often smartphone-wielding young women, make their way through a chaotic world with what little resources have been given to them by society. This scarcity of support engendered a spirit of defiance in Yamato (California) (2016) and an openness for change in Tourism (2018) which helped the protagonists of those films define their own identity. VIDEOPHOBIA is Miyazaki’s darkest work yet, one that shows the shadowy side of technology as revealed through online pornography.