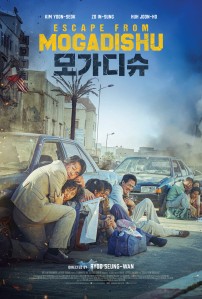 Escape From Mogadishu is a based-on-reality ensemble drama set amidst an action movie spectacle. With the backdrop of the Somali Civil War, it provides the pulse-pounding summer entertainment thrills with poignant moments of humanity as a group of opponents must join forces to survive scenes of carnage. 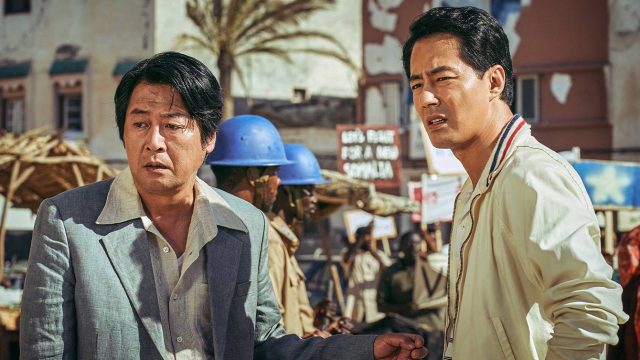 We are taken Somalia’s capital city of Mogadishu, circa 1991. Already unstable, we witness bandits and government forces terrorising the local population and government business done with a massive side-order of corruption. Meanwhile, acting as an undercurrent to life in the city are news reports relaying dispatches from rebellious regions that signal Somalia’s oncoming slide into a decades-long civil war. The whys and wherefores of this turmoil are never gone into detail but what is presented feeds into another conflict, one between the staff of the South Korean embassy and their rivals from North Korea as each seek to curry favour with factions inside the failing Somali government in a diplomatic battle over securing votes for U.N. membership.

END_OF_DOCUMENT_TOKEN_TO_BE_REPLACED

Winner of the Osaka Asian Film Festival 2019’s Grand Prix (Best Picture Award) as well as Busan International Film Festival 2018’s CGV Art House Award and Citizens’ Critic Award, Maggie heralds a new directing talent in Yi Ok-Seop, someone who brings a lively verve to her examination of how doubt can infect everything and how such an infection should be cured by seeking the truth. It’s a large topic tackled with a disparate range of elements from a talking catfish to mysterious seismic activities and audiences will be forgiven for having doubts of their own as to how everything links up and if it will be satisfying but it works in the end.