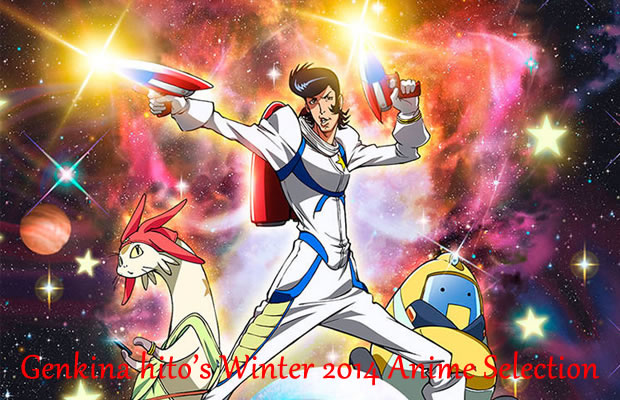 I noticed that the number of shows was up on previous years and that among them are a nice selection of titles that range from the familiar trend of light novel/manga adaptations and sequels to some interesting looking original series. I used the chart on the right (which I got from here) as a basis and went researching for a day. Anyway I culled the best shows from that list to put in here.

The winter may be coming and yet I still haven’t finished the autumn anime selection (there are about three weeks left) but I can say that I love this autumn’s shows and will continue to watch Samurai Flamenco. Indeed I wrote this while listening to the OP for Galilei Donna over and over.

Anyway, back to the winter selection. I’m pretty excited about Space Dandy which sees the return of Shinichiro (Cowboy Bebop) Watanabe to the television with a funky looking space adventure. Just watching the trailer gets me grooving. I’m also pretty hyped over finally getting to see Pupa after it was delayed due to battles with censors over its violent content. There are two anime playing with the historical figure Nobunaga and both shows look like fun especially the one from Shoji Kawamori. Enough rambling, here are my picks!

Dandy is an alien-hunter tasked with finding new species of aliens that have never been seen before. With the aid of a defective robot named QT and a talking alien cat named Meow, he journeys to different planets when not going to “Boobies,” a restaurant full of voluptuous waitresses.

Quite frankly this is the big release for the season for me. This 26-episode anime is an original idea from Shinichiro Watanabe and he reunites with studio BONES and some of the Cowboy Bebop writing staff in the form of Dai Sato and Keiko Nobumoto. The trailer and character designs and sexy women take me back to the old-school anime like Space Adventure Cobra which also had dandy guys in space travelling with oddball companions, getting into wild battles, meeting sexy women and fan service. This is Space Adventure Cobra from Shinichiro Watanabe though so I’m hoping it will be special.