Amma Asante’s Belle has the hallmarks of a costume drama thanks to the setting of Georgian England and its focus on relationships but due to the titular character it is different from other films of the genre. The inspiration for the film comes from a beautiful and lively painting (attributed to Johann Zoffany) of a mixed-race girl and a

white girl, both recently revealed to be half-cousins, both given flattering portrait treatment and both depicted as equals. What makes it strange is that this was painted at a time when Britain was a colonial empire and a centre of the slave trade and both people have equal prominence. The mixed-race girl in the picture is Belle. At a time when the voice of slavers was a loud one in the British Empire because the country derived a massive amount of income from the slave trade, Belle lived the life of an aristocrat and would find herself connected to a court case which would decide the fate of the British slave trade. Assante takes this as a starting point to craft a costume drama with a civil-rights edge that tackles race and gender.

END_OF_DOCUMENT_TOKEN_TO_BE_REPLACED

The live-action adaptation of Nobuhiro Watsuki’s classic chanbara manga Rurouni Kenshin is the latest release from Warner Bros. Japan. The company is building a large portfolio of live-action adaptations of anime and manga for the big screen. Previous projects from the Warner Bros. include releases like Wild 7, Ninja Kids!!!, the Death Note films and the Berserk anime. These are titles which are popular in and outside of Japan, safe properties which come with an in-built fan-base. A safe bet if you will and it seems to have payed off because Rurouni Kenshin was one of the highest grossing film in Japan in 2012 and not without reason because it is one of the best adaptations of an anime or manga that I have seen in a while. This post is full of Gifs so apologies for slow loading times.

END_OF_DOCUMENT_TOKEN_TO_BE_REPLACED 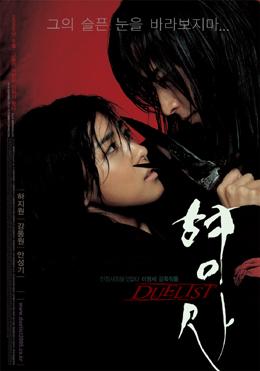 Duelist marks my first experience of a Korean historical film. At first disorientating, once I surrendered to the film I found myself in an intoxicating dream.

Korea under the late Joseon Dynasty is facing the threat of counterfeit money destabilising the economy. Detective Namsoon (Ha Ji-won) and her partner Detective Ahn (Ahn Sung-ki) are investigating the source of this problem but their investigation will reveal much more than standard criminality as they track down the source whilst duelling with a beautiful swordsman named Sad Eyes (Gang Dong-won) who is out to protect the counterfeiting operation. Namsoon will have to confront this mysterious man and the fact that with every duel they have, the two are falling increasingly in love with each other.

The first twenty minutes of the film are packed with so many editing and directing tricks I was scared I would be tired of what was to follow. We witness a police surveillance

operation in a market which turns into stylish chaos as sword fights erupt, a horse stampedes, and people chase each other. We are bombarded with a stop/start rhythm as the film cut between characters across the market and they are captured in slow motion, freeze frames, montage, and undercranking. This reminded me of the sort of impressionistic moments that Wong Kar-Wai uses and once I made that connection I relaxed.