As the Gods Will

As the Gods Will is the big-budget adaptation of a horror-survival manga series written by Muneyuki Kaneshiro and illustrated by Akeji Fujimura. I picked up on it at the end of last year because it looked great and was directed by Takashi Miike who has gone back to his V-cinema horror/action roots as of late. The DVD/blu-ray was released at the end of May and I’m happy to report that this film doesn’t disappoint fans of Miike. The film is a star-studded affair with talented actors like Ryunosuke Kamiki, Shota Sometani, Lily Franky being led by Sota Fukushi in a tale about a bored schoolboy who wants a bit of excitement in his life and gets more than he bargained for.

END_OF_DOCUMENT_TOKEN_TO_BE_REPLACED

The 2015 Rotterdam International Film Festival launches in just over a week and it will take place from January 21st to February 01st. Rotterdam has always been good for Japanese filmmakers with many like Sion Sono, Takashi Miike and Kiyoshi Kurosawa getting their films screened and receiving support. This year’s line-up of titles has some of their latest projects programmed as major films come to the end of a long festival run including Toronto which is where I got some of the trailers from. Of note is the appearance of Lisa Takeba who was at last year’s festival with The Pinkie. Her projects strike me as interesting and it seems that the programmers at Rotterdam agree because she is back with the world premiere of her latest, Haruko’s Paranormal Laboratory!

The line-up features a real variety in topic and tone making this Rotterdam a good one for fans of Japanese films. There are a lot that have toured other festivals but more which have not been widely seen so it’s worth looking at all of them to see if there are any that catch your eye!

Here’s the line-up of films:

END_OF_DOCUMENT_TOKEN_TO_BE_REPLACED

I hope you’re all in good health.
This has been a pretty movie filled week for me and I feel somewhat

energised because of it. I started the week with What Time is it Over There? and Rampo Noir and that was quickly followed by Nightcrawler and at the end of the week I watched a selection of Koji Shiraishi films like Occult and Cult. By the time this post goes live I’ll be in work and after that I am heading to my favourite cinema with an acquaintance from Japan to watch the British film, Mr Turner.

I mentioned my need to crank up the speed with which I review things and I can confirm that I have two film reviews completed with one more almost finished and they all come in at less than one thousand words. You’ll have to be the judge as to whether they are any good or not 😉

The review I posted this week was for The World of Kanako, a stellar film I had a blast watching because it was intellectually and emotionally moving, full of fine performances from many great young and established actors and a visual tour de force. I highly recommend the film which gets a western release courtesy of Third Window Films next year.

What’s released in Tokyo this weekend?

END_OF_DOCUMENT_TOKEN_TO_BE_REPLACED

As the Gods Will 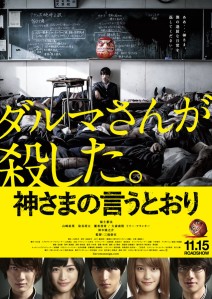 When Takashi Miike announced he was going back to making gory and funny films I couldn’t help but grin. When I saw this trailer I replayed it a dozen times and possibly (probably) cackled with glee at the comedy! This trailer is just fun!