Actually that pairing isn’t so strange since Delpy has appeared in big budget Hollywood films – An American Werewolf in Paris. Meanwhile as a fan of Rock’s comedy I knew he had a deep interest in cinema beyond the usual roles handed out to black comedians as evidenced by films like Nurse Betty, and the fact that he wrote and directed a remake of Eric Rohmer’s Chloe in the Afternoon but how would he translate to the screen here? Well Chris Rock underplays his role with ease, allowing the Europeans to initiate a refreshingly amusing and warm take on the familiar culture clash comedy.

Marion (Delpy) is an artist who lives in New York with her boyfriend Mingus (Rock) and their two children. The couple get along well until Marion’s family from France arrive in New York on a vacation. Mingus will get to see a real French family up close with Marion’s widowed father Jeannot (Albert Delpy), over-sexed sister Rose (Landeau) and Rose’s boyfriend Manu (Nahon) staying at their apartment.

I always feel more comfortable having sex without the kids in bed. 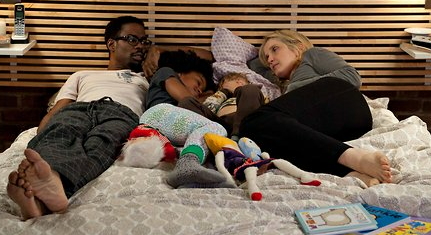 The relationship between Marion and Mingus is refreshingly natural. In the first ten minutes we get a potted history of their history: Marion met Mingus at the Village Voice and he became her confidante during a messy divorce with Jack (from 2 Days in Paris). The two being intellectual and outsiders in American culture, were attracted to each other (Marion being gorgeous must have helped too) and now they share an affectionate and supportive relationship where she calls him her “sweet little koala bear”, and he’s hankering after a taste of Marion. Their cultures have mixed easily – their office is a mixture of books on Duke Ellington, Miles Davis, Lacan and posters of Barack Obama and Cannes – while their children from previous marriages are happy. While they are a liberal couple – Mingus is a journalist/radio host with numerous writing projects and Marion is an artist – they are still a realistic in the sense that the two aren’t so financially comfortable that they can top working even though their French relatives are staying.  Race, never backed away from, plays a component of some conversations but it does not overwhelm, it is just a fact of life which Marion and Mingus splice naturally into jokes and discussions. It is Marion’s relative who bring the chaos and comedy.

Is that some kind of French thing?

If this were an American comedy then we might have been subjected to the chauvinistic/arrogant French stereotype which harbours disdain for uncultured Americans. Despite introducing the family by having them arrested for smuggling cheese into America there are no stereotypes here as Julie Delpy along with her co-star Alexia Landeau create loveable characters who are extremely French in their behaviour but still multi-faceted and real.

Jeannot is emotionally expressive, hugging everyone and delivering every sentence as an exclamation, but it is the behaviour of a man savouring life and humanity. Marion’s sister Rose is an incredibly sexy woman and she knows it, walking around the apartment in the nude and flashing flesh at people, but far from being some bimbo she is a highly intelligent woman who has graduated from the Sorbonne and is just having fun. Nahon’s character is the only one which is one-note as he is goofily in love with black American culture, referencing 90’s hip-hop (Salt and Pepper, Public Enemy), and saying things like “Don’t sweat it bro, I’m easy”. What translates well is the chemistry between the actors, I felt ike I was watching a family living an energetic life. 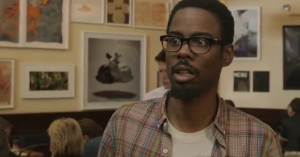 favourite scene being is set in a diner where the two sisters cattily argue with each other in public. A lot of the action takes place in a cramped apartment they all stay in becomes a sort of playground for them and we feel like we are there being so up close with all of those bodies moving around. We feel for Marion and Mingus whose own relationship comes under strain but this being a heart-warming comedy where human relations are celebrated, family wins through. For Marion there are points of melancholy: “Paris is kind of blurry from the Empire State Building” and both Mingus and Maion learn to appreciate their relationships with everybody.

2 Days in New York proves the old adage that family are like laces, the tighter they are the more they can hur, but we still need them and does so with humour and the affection at its heart.