Ice Cream and the Sound of Raindrops 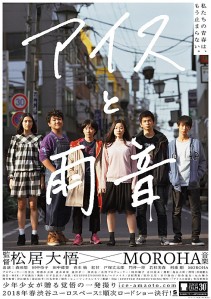 Daigo Matsui is famous as a director who has worked on mostly youth-oriented movies like Afro Tanaka (2012), Sweet Poolside (2014), How Selfish I Am! (2013) and Japanese Girls Never Die (2016) but did you know he is a former manzai performer and has his own theatre company? Matsui takes on the theatre world here with an adaptation of British playwright Simon Stephens’s coming-of-age drama “Morning”. However, instead of simply recording a performance to screen in cinemas, we are delivered into how the original story is translated into a Japanese setting and how universal its message of teenage angst is. What plugs us into this creative space and new and unique understanding of the text is that the film is done in a flawless 74-minute take that gets behind the scenes of the play and shows all the pressures and risks for the actors involved in bringing their roles to life.

In 2017, a stage performance of “Morning” is scheduled to run in a small town. It is a savage play that has been attracting attention in the theatre world for its story of a violent act by two best friends fighting through a rough adolescence. The film starts a month before the opening night. A cast of six young actors are being pushed to their limit by a director who gives out abstract plans and demanding instructions:

“I want to show you all really living on the stage.”