This is the first of a two-part trailer post. You can find the second part tomorrow.

What are the first batch of films released this weekend?

Ryuichi Hiroki (Your Friends) works on a movie adaptation of a Kanae Minato novel. She’s famous for Confessions, Penance, and The Snow White Murder Case. The cast is led by Erika Toda (SPEC) and Mei Nagano (Parks) who play a mother and daughter caught up in a difficult relationship and a nasty mystery that looks like it plays on unreliable narrators and different perspectives – something Minato loves utilising – as it calls into question whether something like love between family members is natural or always present.

Synopsis: High school girl Sayaka (Mei Nagano) and her mother Rumiko (Erika Toda) look like a stable family from the outside but when Sayaka dies and the reason is unclear – was it suicide or an accident??? – the truth begins to be revealed. Such revelations come about since the story is told from both the perspective of Rumiko and Sayaka and so Motherhood recounts the same events differently so that we get a sad tale of a family where love is absent…

Legend of the Galactic Heroes: Die Neue These Sakubou  Part 3

This is the fourth season of the latest anime adaptation and it will have three parts shown in cinemas for three weeks at a time before they get broadcast on television.

The Galactic Empire is gaining support from the people it governs as Reinhard’s reforms bring benefits. Meanwhile, the Free Planets Alliance is in decline due to government corruption despite Yang’s efforts. While all of this is going on, a third power enters the fray, the Free Dominion of Fezzan, which is under the leadership of Adrian Rubinsky. His target is the weakening of the Free Planet Alliance. Reinhardt knows of the plot and wants to use it for his own ambitions…

In this instalment, Reinhardt is about to launch an attack on the Free Planets Alliance but his stratagem has been rumbled and it’s all contained in a letter that can derail the offensive…

That Time I Got Reincarnated as a Slime: Scarlet Bond 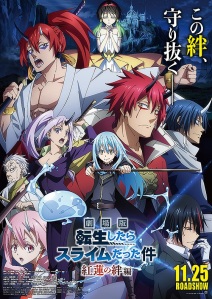 A movie continuation of the series.

Synopsis: Rimuru was an ordinary salaryman but he was reincarnated as a slime in another world and it looks like he became a Demon King in his new life. In the small country of Raja, a conspiracy swirls around the mysterious power of the queen. Rimuru encounters a survivor of the Great Ogre Tribe and gets involved in a new battle.

Synopsis: Kenji is a stand-up paddleboarding instructor and guide who works in Nasushiobara City, Tochigi Prefecture. He has lived alone with his mother since his father died when he was young but after his mother passes away due to illness, he is alone. This is when he meets a travelling illustrator who gets Kenji to find direction in his life.

This is a new and extended version of a film shown at the TBS Documentary Film Festival 2022 held in March 2022.

Synopsis: Yasushi Yamanoi and his wife Taeko are two of Japan’s leading climbers. Radical climbers, some might say, as they attempt climbs without oxygen and in unexplored areas. Their efforts have seen them lose fingers and even the tip of a nose to frostbite. Anyway, in 2021, Yasushi Yamanoi became the first Asian to win the Piolet d’Or, a the highest honour in the mountaineering world and journalist Hiroaki Takeishi, who himself has experience climbing in the Himalayas, made this film to look back on Yamanoi’s experiences. Expect interviews with people and narration from Junichi Okada Junichi.

An adaptation of the manga Naniwa Kinyu Michi which is set in the shady side of the financial world of Osaka.

Synopsis: Tatsuyuki Haibara struggled to find a job due to a poor credit score but one place willing to hire him is Teikoku Finance, a “street money” lender that employs dubious methods to get customers to repay their loans. 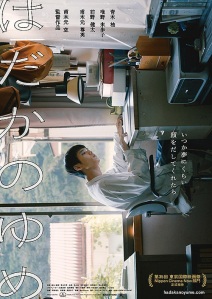 This is the second feature film by Sora Fukimoto following 2016’s Haruneko. Apparently, he is part of the two-piece band Bialystocks as the vocalist. This particular film was inspired by Fukimoto losing his parents at a young age.

Synopsis: A young man named Noro lives by the Shimanto River with his elderly grandfather and mother, a woman about to die. Noro has trouble accepting that his mother will pass away and the two reassess their relationship.