This is the first in a two-part trailer post. Come back tomorrow for the follow-up!

What are the first bunch of films released this weekend? 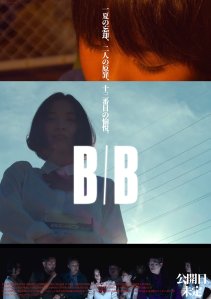 I saw this one as part of Osaka Asian Film Festival 2021 and despite initially enjoying it a lot, I lost my passion for it as I wrestled with the possible influences that had gone into it.

In the world of the film, the 2020 Tokyo Olympics were cancelled due to corruption 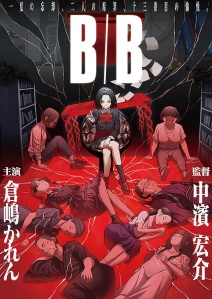 by the minister in charge and there has been an attempted spraying of poisonous gas by a new religion. In the shadow of these two incidents, the murder of a convenience store owner has drawn a limited response from police and press but a suspect in the killing has been found: high school girl Sanagi (Karen), a loner who had an exchange with the victim’s young son Shiro (NAKAZAWA Koshin). The axis of the film is her questioning by a psychiatrist and a detective but it won’t be easy since she is suffering from multiple personality disorder and her personalities each emerge at random to recollect what happened from their respective perspectives.

“B/B” is an absolutely fun experience that is bold in its super-stylised visuals and acting, all riffing on cult anime and live action shows, whilst also packed with a million references to all sorts of pop-culture ephemera. Behind this dazzling facade, a really dark story is smuggled in that will leave viewers stunned. 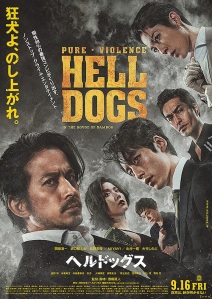 Junichi Okada (The Fable 1 and 2) worked with Masato Harada (Kamikaze Taxi, Bounce KO Gals) on Sekigahara and Baragaki: Unbroken Samurai in the past and the ultra-machoness continues in this yakuza drama that includes musician Miyavi.

Synopsis: Shogo Kanetaka is an ex-police officer whose trauma over losing a loved one in a murder sent him spiralling into a whirlpool anger and a desire for vengeance.  Since that horrific time, Shogo Kanetaka has only thought about revenge. His rage attracts the attention of a police unit that recruits him to infiltrate the largest yakuza group in the Kanto area. His way in will be through Hideki, a psychopath who Shogo’s superiors reckon he can win over.  The two do indeed pair up and they fight their way to the top of the gang.

Naoko Ogigami of Rent-a-cat and Close Knit works with Kenichi Matsuyama (Detroit Metal City) and Hikari Mitsushima (Sawako Decides) to bring to life one of her novels.

Apparently, the “Mukolitta” in the title is derived from “Muhurta”, a Sanskrit word that is a term for one of the Buddhist units of time (1/30th of a day = 48 minutes),. In effect, it means “a little happiness.”

Synopsis: Takeshi Yamada moves to a small village in the Hokuriku region where he begins to work at a small factory which makes shiokara, a salted fish paste. His digs is a 50-year-old apartment that is cheap to live in. Yamada hopes to live quietly but his neighbours have other ideas, particularly Kozo who insists on using Yamada’s bath. Friendship is on the horizon for Yamada but he has a secret…

The writer, director, and stars of the Galileo franchise are back with a third theatrical film based on one of Keigo Higashino’s best-selling novels. that means enjoying the chemistry of an aloof Masaharu Fukuyama (Like Father, Like Son, The Third Murder) and a cute Kou Shibasaki.

Synopsis: Physicist Manabu Yukawa returns to Japan from America just in time to help detective Kaoru Utsumi with a case involving a high school girl who disappeared only for her to show up dead several years later. The chief suspect was a classmate of Yukawa’s at university and he was previously arrested for another girl’s murder but released due to a lack of evidence. Said suspect returned to his home town where he is very much hated only to wind up dead…

Synopsis: Sawako is an office worker with a difficult relationship with her father. For some reason, her hobby is to take pictures of middle-aged men. Her feelings on these issues become clearer as she grows closer to Mori, a co-worker of the same age. 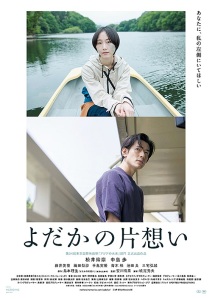 Yuka Yasukawa, director of Dressing Up and one of the segments of Kamata Prelude, takes on a novel adapted for the screen by Hideo Jojo (On the Edge of Their Seats).

Synopsis: Aiko Maeda is a college student with low self-esteem because she has a large birthmark on the left side of her face. The reactions of others have put her off trying to have fun and she her life has turned to one focussed on studying. One day, she is interviewed for a book about people with injuries on their face. Said book becomes subject of a movie adaptation and the director, Aita Tobisaka, interviews her. It seems that he accepts her for who she is and Aiko realises that she has fallen in love with him. As the two interact, she tries to get closer while also dealing with her feelings for herself. 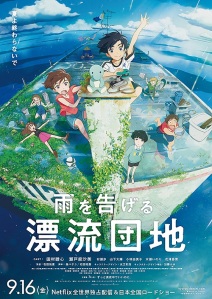 Hiroyasu Ishida (Penguin Highway) had his latest film released worldwide for streaming on Netflix worldwide on September 16. The film will also be in select cinemas in Japan starting on the same day.

Synopsis: Close friends Kosuke and Natsume find themselves drifting apart after Kosuke’s grandfather passes away. One day during their summer vacation, Kosuke and his classmates sneak into a danchi due for demolition going on the rumour that it is haunted. Since it was the childhood home for both Kosuke and Natsume, the place is packed with memories and it is there that Kosuke stumbles into Natsume. Their reunion gets weird as a mysterious phenomenon deposits them and the apartment complex in a vast ocean and leaves the kids in a situation where they have to work together to try and survive!