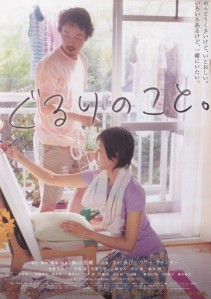 2008 was a vintage year for Japanese cinema as a number of titles were released that have stood the test of time. The most notable are a triumvirate of slice-of-life dramas that left an indelible mark on the film world with Tokyo Sonata and Still Walking leaving a lasting impression with cinephiles while Departures had enough crossover appeal for mainstream audiences to become the first Japanese film to win an Academy Award for Best Foreign Language Film.

Not talked about as much but equal to all three is All Around Us, a hidden gem of a marriage story that takes in an epic sweep of social history while delivering intimate character studies all told through subtle direction that respects the audience’s ability to understand and naturalistic acting that is heartfelt and compelling.

The film starts in 1993 in Tokyo and introduces us to Kanao (Lily Franky) and Shoko (Tae Kimura). We enter their lives just as she launches a campaign to get pregnant.

The two are a study in contrasts that is initially fun. She is a controlling woman who works at a small publisher and is capable of great things. He is a laid-back and louche lothario who slums it as a street-side shoe repairman. She dresses primly. He dresses sloppily. She uses diaries and calendars to orchestrate book launches in work and marital sex nights at home to maximise chances of getting pregnant. He loafs around and dutifully, if a little perturbed, goes along with her instructions after days of flirting with female customers. For her, sex is almost laughably clinical while he goes with his passions, as shown in one hilarious scene where he cheekily surprises her by trying out a new sexual position that throws her off her game.

Snugly snuck into the depiction of the couple’s routine is Shoko’s overbearing family who we first meet at a raucous dinner where their personalities shine bright in dialogue that essays a fraught history. Her mother (Mitsuko Baisho) speaks bluntly and self-servingly of her breakup with her pro-baseball-player husband and Shoko’s braggart of a brother (Susumu Terajima) practically throws money around and talks of playing the property market and the hostesses he hung around with, one of whom turned into the mother of his rambunctious children. Amidst all of this colourful conversation the dialogue drives home that Shoko’s family see Kanao as an underachiever as they push for him to try making good on his art degree and going into commercial business. He half-heartedly acknowledges them while Shoko jokingly plays defence for him.

How this couple works and if they can last due to their opposing natures becomes the crux of the drama and their differences makes for compelling material as their bond is tested when he gets wrapped up in a courtroom sketch artist job with a TV news programme and she gets pregnant. It looks like their lives will blossom in a hopeful way but… 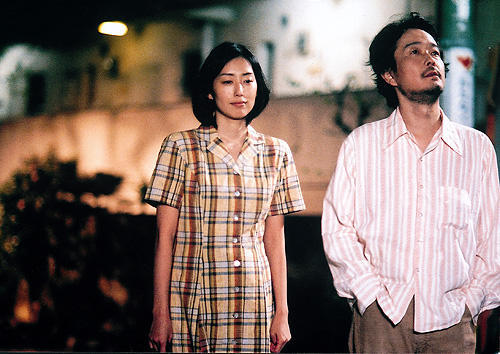 Fast-forward a year to 1994 and a shot of a memorial for their child shows that Shoko and Kanao have suffered a major tragedy. They move to a new abode but the heartbreak follows them and over the years, slowly and steadily, Shoko gradually unravels as she experiences a period of depression while Kanao continues with his work. It seems that their differing personalities cause tension between them and a split is inevitable as Shoko sinks deeper into grief.

As the film engages with darker, heavier, more tragic aspects of the marital drama Hashiguchi’s script keeps proceedings light while honing the drama by using time skips and zeroing in on crucial moments in their crisis and allowing the actors and visual composition to deliver much of the information rather than dialogue.

Shoko and Kanao’s new home is a darker place and emptier. Their love life lacks the intimacy and humour of before as Shoko often closes the bedroom door on Kanao and he stares uselessly at it. At a book launch for a work on childrearing, her efforts at controlling things and herself breaks down. Meanwhile Kanao’s laid back attitude increasingly comes across in a way that audiences will either read as helplessness or apathy in the face of his wife’s suffering.

Tae Kimura steals the show here. She won Best Actress at the Japan Academy Awards for her moving performance, thus preventing Departures from having a clean sweep at the ceremony. The award was richly deserved as she believably goes from being confident and in control to a woman mired in suffering without ever falling into melodrama. Seeing her smile disappear, her energetic body movements become clipped and tense, and her dress-sense become dishevelled really captures the rupture in her self-perception and her increasing fragility as she confronts not being able to control everything. We really come to care about Shoko. The public breakdowns are brutal to behold and make for moving drama as we watch to see how things unfold for her.

Novelist-turned-actor Lily Franky is in one of his earliest roles with Kanao. While he later learned to lean into portraying the weird, the wise, and the sardonic aspects of his characters, here he does just enough to depict a partner who provides a quiet, gentle, and steady presence that ultimately proves to be supportive. Whatever he lacks in depth, the story makes up for in context that informs character arcs.

Although these two characters drive the action of the film, the people and court cases all around them add depth, complexity, and further humanity. Scenes with Shoko’s brother and his family illustrate the bursting of the property bubble, influences of cults, and slow impoverishment of people. Meanwhile the court cases provide an ensemble of secondary characters like journalists, victims, and criminals whose succinctly-told stories, drawn from real life crimes like the Aum Shinrikyo sarin gas attack on the Tokyo subway, allow Kanao the chance to contemplate the pain and suffering of others and it forces him to acknowledge Shoko’s troubles and open up emotionally in. This naturally leads to a climactic showdown that demonstrates that due to his nature he left the love unspoken and simply demonstrated it through being there for her. Likewise, the drama of Shoko’s family helps her come to terms with not being able to control everything. In this way, the two characters can grow anew as their arcs reach satisfying conclusions.

For the observant, those who have tracked the details all around the couple, there are glimpses of what can glue them back together. Just as Kanao is an artist, so is Shoko and this outlet provides the path with which gives her a philosophical uplift to let go of her grief and reconnect with Kanao but he has to offer support first. The film organically gets us to that point. The artistic resurgence leads to changes in Shoko’s appearance and attitude again as she pores over her paintings. It is in these moments that the camera adopts POV shots from Kanao that suggest he is becoming more intimate with Shoko.

Clumsier films might have used a lot of dialogue but Hashiguchi’s work with his cast is more elegant. We know that Kanao and Shoko work as evidenced by the easy chemistry the actors share. Hashiguchi allows it to radiate off the screen with static camerawork that foregrounds the cast’s naturalistic acting. His editing also channels our understanding like the way he deploys iris transitions to focus on Shoko’s hand gently resting on Kanao’s back after the family meal.

Hashiguchi’s nuanced direction retains that observance and subtlety in a great shot where a new photo that takes pride of place where the memorial stood informs us of an emotional catharsis at the end. 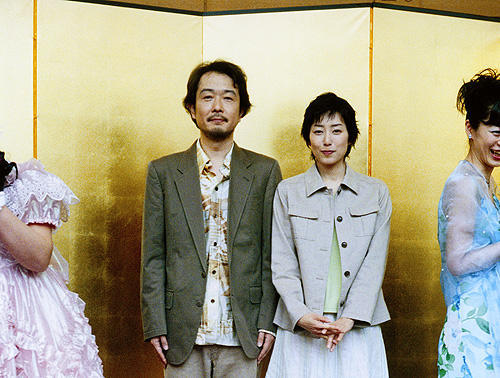 This, the final line of the film, is uttered by Kanao while watching people passing by on a street. It is possible to feel that in following their relationship and the people around them, we have watched the lives of genuine people and changes in society. The dramatic arcs of the film are made up of a myriad of lives full of heartbreak, happiness, humour, and the hunger to live amidst changing times that create a richly detailed social tapestry. The material is all told with the preciseness and lightness via direction and script that belies the near decade of change the drama unfolds in so it is never boring. That, coupled with Tae Kimura and Lily Franky  and the rest of a top-notch cast of veteran actors providing emotionally moving performances that make us care, makes the film a satisfying watch.

This film deserves to be much better known.