The 33rd Tokyo Student Film Festival runs from August 20th to August 21st in Shibuya Eurospace and it has 12 films on offer. These films are split into three programmes, features, animation, and shorts.

Here are details on the films with information pulled from the festival site. Click on the links to find out more about the films and filmmakers who have given comments on the background of their films (highly recommended!).

Miku Yasumoto became interested in film after receiving a camera from her grandfather. While studying at the Department of Film Production at Kyoto University of the Arts, she directed short, medium, and feature films. Her first film, the short Ukabu Katsumuri was screened at Japan Film Fest Hamburg (link). This is his second film as a director.

Synopsis: Azusa Yano lives a quiet life with her grandmother, Hotaru. Every day, after school, Azusa takes photos of a mysterious girl who sits in front of a flower shop. One day, Azusa finds a wedding veil in Hotaru’s wardrobe and after that day, Azusa and the mysterious girl become friends. Azusa calls the girl “Hotaru” and follows her as she peeks through her camera’s viewfinder and puts the veil on her head.

Originally hailing from China, Liubo has studied and worked in China, Taiwan, and is now based in Japan. He entered the graduate school of Musashino Art University’s Department of Film and New Media in 2020. At each stage, he has made films and has worked on titles like Plan 75 as staff. This film was created as the result of learning about the passing of a classmate, his reckoning with the fact that he has not returned to China over the last two years, and his examination of his memories.

Synopsis: Naoto recalls his loyal friend Takumi. The two separated after spending their boyhoods together and Naota went to the city while Takumi simply disappeared. Takumi’s absence lays heavily like a stone on Naoto’s heart and as the latter returns to his hometown to look for his friend, his memories and reality intersect…

Tomoki Suzuki is a graduate of Ritsumeikan University where he majored in live-action video, focusing on short films and music videos. This film, his debut feature, won a Special Jury Award at the Yubari International Fantastic Film Festival. It combines a story about a girl who can see lies, which he came up with in high school, and the current Covid-19 pandemic and how bashing happens on SNS.

Enma is a high school girl who hates lying and has the ability to make the lies of others appear as letters when she looks in the mirror. She meets, Seira, a girl who has never told a lie. Through their interactions in a world where Enma sees many things as a sham, a bizarre story of distorted justice in an era of SNS comes to life.

Yuki Horiuchi reps Toho Gakuen Film School and his 2021 film Fuckin Spring Has Come won the Audience Award and the Jury’s Special Award at last year’s Tokyo Student Film Festival. This is a one-cut film and it seems to be shot entirely from inside of a car. He has a short film in another programme.

This film is an ensemble piece taking place over the night from August 31st to September 1st. It was featured at Skip City D-Cinema Festival.

Synopsis: Yamanobe and Kimi are students whose scheduled job interview has been suddenly postponed. Shuichi calls Rinko, the former manager of his baseball team. Kento and Kyoko work together as part-timers at a convenience store. In a town near the sea, three pairs of young people face the end of summer over an unforgettable night.

Amane Oda graduated from Hiroshima City University in 2020 and enrolled on the Animation Course at the Graduate School of Film and New Media, Tokyo University of the Arts where she creates animations and illustrations. Her previous works include Amane Nikki (2021). This work was inspired by her need to escape the ongoing Covid-19 pandemic.

Synopsis: A summer ensemble drama containing hopes and giggles during a time when things are crappy.

Aozora Maeda graduated from Nihon University College of Art, Department of Cinema in 2022. His works combine rotoscoping, live-action materials, and 3DCG to exploit the differences in motion, tones, and depths found in the material he works with. He currently works in commercial animation production while creating original works.

Synopsis: The world of a man experiencing hallucination of a “crab” and the woman who gazes upon him is told in a variety of forms and textures that make their space an absurd place.

Moe Wakabayashi is an animation artist and illustrator. Her educational background includes graduating from Tama Art University (2015) and, in 2022, she completed the Animation Course, the Graduate School of Film and New Media, Tokyo University of the Arts. This film was featured at Skip City D-Cinema Festival.

Synopsis: A family of three, a pig, a fish, and their tadpole boy, live peacefully in the belly of an even bigger fish. One day, a piece of fruit drifts up to them and it changes their lives forever…

The River was Calm

After graduating from Musashino Art University in 2022, Haruo Saki entered the the Animation Course at the Graduate School of Film and New Media, Tokyo University of the Arts. Her motivation for making the film was considering how to face death. 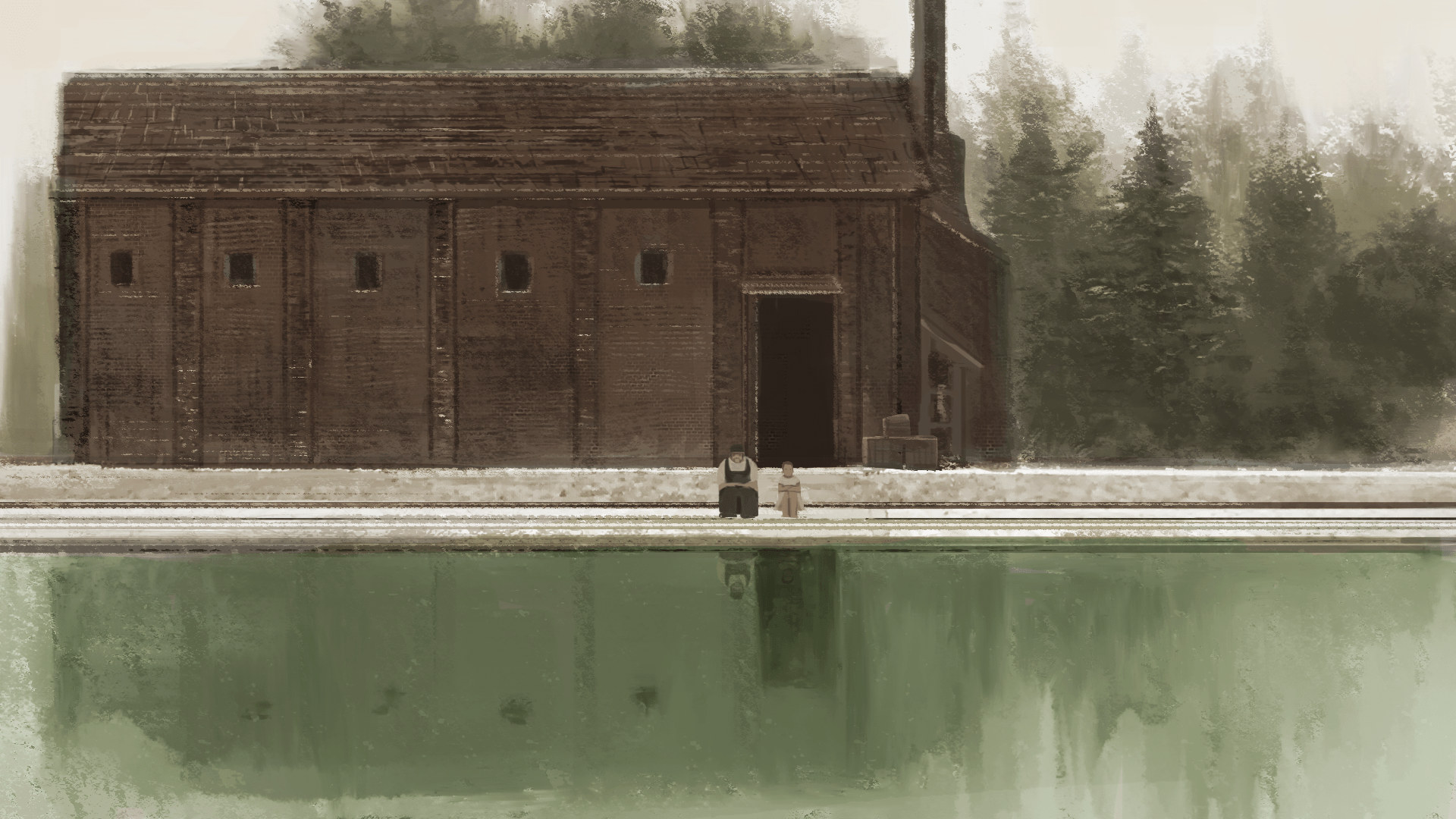 Synopsis: A boy whose family has died meets an old man at a crematorium. Their shared circumstances of death begin to overlap and the boy begins to face death properly in the light of a calm river that shimmers outside.

Chika Arakawa is an actress and director. She entered the entertainment industry in 1999 and has appeared in films such as Yoji Yamada’s Tokyo Family (2013), and her award-winning turn in the 2010 Russian film Yakuza Girl (Doch Yakudzy). She has also appeared in the 2020 short School Radio to Major Tomand many more films. Since entering Nihon University College of Art, she independently produced films and music videos. COMPASS is based on her experience of losing her pet and thinking about how to work through dealing with the loss of a loved one.

Synopsis: A 10-year-old girl named Tsuki has lost her cat, Mimi. They had lived together ever since Tsuki was born and so the loss is deep and Tsuki is lost in sadness. After the crematorium, Tsuki finds herself by a body of water and encounters a mysterious being, a cat with a fur pattern similar to that of Mimi. The cat says to the bewildered Tsuki, “Don’t worry! I will take you home,” and taking Tuki’s hand, the two set off on their journey…

Honoka Matsuoka is another Musashino Art University student. Her work was inspired by watching a friend in a documentary make a shocking confession. Her 2021 short film Longer than Dinosaurs, Shorter than the Sea「恐竜より永く、海より短く」 can be found here.

Synopsis: Jun, Nana and Ko are friends at the same high school. One day, they break their boring routine by skipping classes and going to the beach. There, Jun dreams that Nana kills her boyfriend…

Yuki Horiuchi reps Toho Gakuen Film School and his 2021 film Fuckin Spring Has Come won the Audience Award and the Jury’s Special Award at last year’s Tokyo Student Film Festival. This is a one-cut film and it seems to be shot entirely from inside of a car. This film won the Grand Prix at the Gallery N Film Exhibition.

Synopsis: In a car, two people, a man and a woman. They talk while the car radio is playing their memories of each other.

Ririko Suzuki attended Musashino Art University and is currently enrolled in the Master’s Course in Advanced Art Expression at Tokyo University of the Arts. She has been into film and photography since junior high school. Her short film Between hate&like was screened at Image Forum Festival 2021.

Synopsis: Ririko’s film aims to convey the story of a person without any lies. As  the lead performer, she enters into what she calls an, “unstoppable dialogue with myself” and looking into factors like obsessions, anxieties, the self and the outside world, as well as a connection to others. How this plays out in a narrative feature will be for audiences to discover!

Here is past coverage of the event: