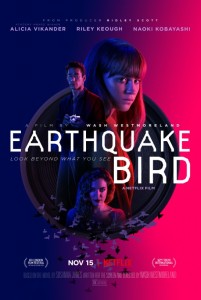 “I think that’s what I like about Japan, it gives you a second chance.”

Japan is a country that attracts a lot of a certain type of person. People unhappy with their lot in life or looking for adventure. Sensitive, misguided, naïve, whatever you want to call them, they are people looking to immerse themselves in something different and possibly change their reality. This is what I found to be most interesting in Earthquake Bird, the Netflix adaptation of Susanna Jones’ same-named novel.

The need to become someone else is definitely the case with Lucy Fly (Alicia Vikander), a translator living in Tokyo circa 1989. When we first meet her, she is working on a Japanese translation of the dialogue of the Michael Douglas film Black Rain (1989). She’s soon arrested by police investigating the disappearance of an American nurse named Lily Bridges (Riley Keough). When body parts wash up in Tokyo Bay and Lucy confesses to having killed the woman, it seems like an open and shut case. Except it isn’t.