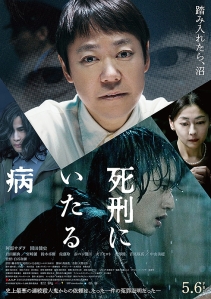 One of Kazuya Shiraishi’s favourite metiers is the crime genre. He is probably best known for The Blood of the Wolves (2018) and Last of the Wolves (2021), two yakuza x cop films that hark back to the Battles Without Honour and Humanity works of Kinji Fukasaku. Beyond that he has done corrupt cops, like in Twisted Justice (2016), and serial killer movies like sleepy true-crime story The Devil’s Path (2013). He returns to the latter genre with the far superior Lesson in Murder, a well shot film that works thanks to the casting of Sadawo Abe and the use of the actor’s beaming smile and cheerful demeanour to create an unforgettably chilling, sadistic murderer.

The story centres on Masaya (Kenshi Okada), a despondent student who attends a second-choice university while labouring under an oppressive family atmosphere.

Masaya’s dark days of depressive encounters with an overbearing disappointed dad (Takuji Suzuki), mousy mom (Miho Nakayama), and callous classmates are shaken when he is contacted by a serial killer named Yamato Haimura (Sadawo Abe), a figure from his time in junior high school whom he remembers used to be popular and run a bakery before it was discovered he was responsible for the murder of fresh-faced pure-hearted high school teens. Now on death row, Yamato is facing his final days. His letter summons Masaya to a meeting at a prison interview room where he claims that he did not commit the last murder that he is accused of, that of a 26-year-old office worker. If his preferred prey were teens, why target an adult? He makes the case that the real culprit is still on the loose. Masaya, intrigued, investigates.

An adaptation of Riu Kushiki’s 2017 novel, Lesson in Murder is, in terms of style and content, akin to Gukoroku – Traces of Sin (2017) and Hirokazu Kore-eda’s The Third Murder (2017). The film operates with an investigative framework split between the interview room and the protagonist out in the field. The accretion of details from the painstaking visiting of crime scenes and taking of testimonies eventually yields sordid family drama and social critique that plays with the notion of people inheriting trauma from older generations.

Longwinded from its novelistic approach, we get flashbacks, confessions, and shock connections that hold our interest since they come to inform Masaya’s background and his character development in darkly destructive ways. Kenshi Okada is a solid lead as he goes from an alienated, affectless teen to a more driven character as the case takes a personal turn and he finds out that his connection to Yamato runs deep. 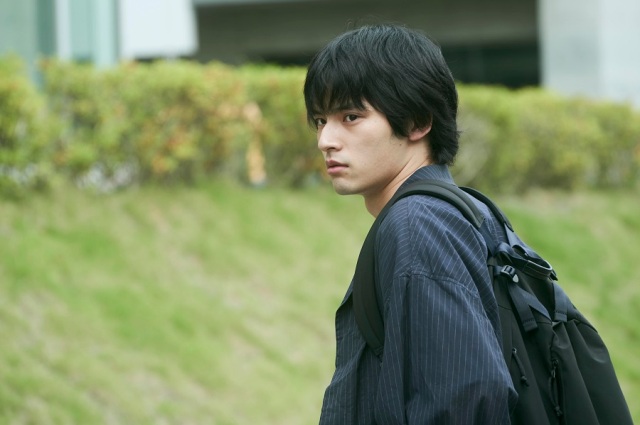 Audiences will be wondering why Masaya gets involved with a malevolent murderer and a case so grisly in the first place because soon after Yamato’s first letter is read, a sequence shows his modus operandi of charming his victims before mercilessly kidnapping, torturing, and killing them. The film does get grisly in sight and sound with flashbacks showing close-ups of fingernail pulling, slicing and dicing flesh and innocents screaming. However, holding us rapt through the few instances of stomach-churning explicit imagery is a fantastic performance from Sadawo Abe who demonstrates a magnetic performance that allows us to believe his character Yamato could rope Masaya into his schemes.

It is possible to only be familiar with Sadawo Abe from his comedies like The Apology King (2013) and Louder!: Can’t Hear What You’re Singin’, Wimp! (2018), but he has put in work in many dramatic films like his fantastic turns in Dreams for Sale (2012) and Kazuya Shiraishi’s Birds Without Names (2017). He even has form in the horrific considering he was in Splatter: Naked Blood (1996), a film which features some near vomit-inducing body horror. Here, his wide smile, overwhelming charisma, and friendly persona are used for perfect effect: to hide the cruel mind of a coldblooded killer. The warmth and friendliness he exudes when talking to others are convincing, compelling.

Yamato is a shoulder to lean on and a guy so nice, you would stop and chat. But that smile becomes a shark-like grin when he preys on others and when he drops it to reveal a dead-eyed stare as he reveals his true self, it is absolutely terrifying like looking into black holes that such all life in. Shiraishi knows the value of this performance and holds on close-ups and uses slow zooms for when Yamato is on the stand or in the interview room working his magic and manipulating his mark.

Shiraishi’s production really shines when he focusses on these moments. He uses tricks like having old movies on the walls of the interview room to expand the space the characters are in by showing what is going through their heads. Much like The Third Murder, there is overlaying of reflections of the character’s faces over each other in the interview room as they talk and seeing hands move through what we thought was the glass partition creates sensual moments as killer and witness find their personalities intermingling.

That early meeting between Masaya and Yamato sets the marker for what is brilliant about the film as the latter constantly tries to manipulate the former. This provides the engine of intrigue to keep audience attention hooked beyond the slowly built upon drama surrounding the teen and how he reacts to the killer and his revelations. The performers work perfectly to make events gripping as we become enraptured with the relationship drama and the psychological development between the lead characters as Yamato gives Masaya a lesson in murder.