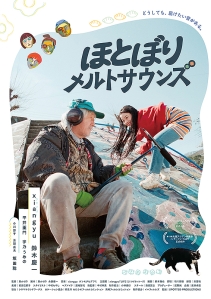 Melting Sounds is part of the latest wave of films associated with MOOSIC LAB, a competition wherein the films submitted feature up-and-coming directors who have created works that fully utilise the music of rising musicians. Like many previous films associated with the competition, the story muses about mortality but writer/director Kahori Higashi finds a truly novel approach to the subject-matter and utilises the film’s musical artist xiangyu perfectly by channelling her cute style and electropop sounds to temper the sadness of the narrative.

It all begins on a quiet winter’s morning in Kiryu, a rural city in Gunma Prefecture, when a young woman named Koto (xiangyu) arrives at her late grandmother’s home for a solo getaway trip from the city. Upon opening the place up she disturbs an old man named Take (Keiichi Suzuki) who has pitched a tent in the garden from which he ventures out to record sounds of everyday life in the town through an array of analogue recording devices. Once recorded on cassette tapes, the sounds are buried in the ground to create “sound graves.” Koto, intrigued, joins in.

Take is just the first of three interlopers Koto meets at the house, the other two being affable young man Yamada (Amon Hirai) and Hiroko (Umeno Uno), Yamada’s somewhat stern but secretly sweet and slightly older superior in a real estate company. Both initially try to kick Koto and Take out of the house but Koto’s implacable upbeat attitude sees them become part of a patchwork family who help Take record sounds. Thus begins an eccentric slow-paced adventure defined by a gentle atmosphere and interactions between characters with conflicting personalities as they either loll about the house and enjoy “family time” or roam around town recording life’s ephemeral moments for posterity.

Although it might initially be bemusing seeing chuckle-worthy scenes of mismatched characters recording dogs barking, washing machines whirring, and lovers quarrelling, as the story wends its way to its conclusion, these seemingly random actions are given meaning and connective tissue through lines of dialogue. It starts offhand, like with Hiroko giving life advice as she takes to mothering characters, but it becomes more direct as Take relates his childhood memories of Kiryu before he explains why he is making mixtapes. These lines add to the context of the story to create a truly tear-inducing twist based on mortality and the passing of all things.

Beyond slowly revealed character motivations, the emotional punch of the film is given extra weight due to the rich subtext of the impermanence of all things that Higashi builds up. The film takes place in winter in what feels like a fading town where the elderly outnumber the young and a property developer aims to wipe away history. The majority of interior scenes in the film take place in an old-fashioned house full of props that are nostalgia-inducing for a pre-digital way of life that is slipping away. We learn through conversations that Koto and the other characters are adrift from those dearest to them. A glimpse of city life shows unhappy people glued to phones and losing touch with others. Indeed, even Hiroko’s first appearance has the hallmarks of death as she appears as a face on an iPad screen carried by Yamada in a style reminiscent of mourners holding a funeral photo portrait in a procession. It becomes text when characters say lines like, “Everything comes to an end eventually,” and “This town only has endings and no beginnings.”

Despite dealing with the transience of life, the film finds a certain warmth and comfort through its many scenes showing the connections growing between the characters as they share curry, gyoza, kotatsu, and play boardgames. The sight of them breaking through their isolation to experience some form of togetherness warms the wintry atmosphere of the film. This, coupled with them embracing life through recording sounds also offers a counterpoint to the sense of loss that is gently examined by the narrative.

Throughout the film, Higashi captures beautiful scenery and uses the old-fashioned buildings and the quiet countryside to create a sense of nostalgia for a simple way of life that encourages people to commune. There are some visually interesting compositions, all centred on the characters being together and Higashi isn’t afraid to let the camera run during scenes like a shared meal so audiences can lap up these moments and appreciate the easy interplay between the actors. Due to this we can see xiangyu project an infectiously upbeat and cute personality used to encourage people to try out new things while Keiichi Suzuki, of the rock band Moonriders, ably channels an offbeat wise-old-man act that helps deliver the themes of the film. Meanwhile, Umeno Uno’s deadpan reactions are perfect for subtly tipping a scene from the serious to the comedic to lighten the melancholy mood Higashi’s story renders.

Overall, Higashi uses a light touch to deliver a deeply humanistic paean to cherishing connections and the existence of all things before their time runs out in a unique take on battling the finality of mortality through capturing sound.

You can see the film at K’s Cinema in Shinjuku from July 16th.

You can read my interview with director Higashi here.