Tetsuki Ijichi is a veteran in the international film industry, having worked as a,

assistant director, producer, projectionist, publicist, and sales rep (amongst many other things) in Japan since the 80s. Now based in Philadelphia, USA, he is using his experiences to bring Japanese films stateside as the president of Tidepoint Pictures – Don’t Look Up (1996), Noriko’s Dinner Table (2005) and Uzumaki (2000) – Rain Trail Pictures – Videophobia (2020), Lovers on Borders (2018). I now have the chance to interview him but not for his important contribution as a film distributor but as a director in his own right as his short film, Laundromat on the Corner (2020) is available to stream on FilmDoo.

Laundromat on the Corner is a supernatural romance that effectively mixes Eastern and Western culture together for a film that could be said to be a modern twist on Ugetsu Monogatari (1953). The film, set in working-class Philadelphia, follows Josh (Eric Slodysko) a deep-in-debt down-on-his-luck desperate divorcee eager to escape his miserable situation as a put-upon home helper to a terminally-ill lady named Mary (Joanne Joella) and her daughter Beth (Heather Blank). Respite comes in the form of Ming (Stephanie Pham), a woman in a white dress who catches the eye of Josh at a laundromat he starts to use. Of course, there is more to Ming than meets the eye and it isn’t long before Josh finds the borders between life and death collapsing…

Having had the chance to review the film, I was eager to ask Tetsuki some questions relating to the making of it, his influences (a fellow horror film fan!) and his experiences of working in Japan and America!

END_OF_DOCUMENT_TOKEN_TO_BE_REPLACED

Laundromat on the Corner 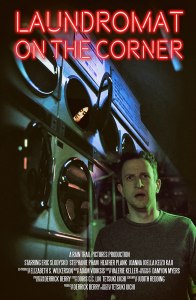 In what one might see as a modern twist on Ugetsu Monogatari (1953), a man eager to escape his bleak existence finds himself entering an unconventional relationship. While not a terrifying time, it has a good horror atmosphere and effectively mixes Eastern and Western culture together for something unique.

The Ugetsu update takes place in working-class Philadelphia where a desperate man named Josh (Eric Slodysko) has washed up following divorce and money problems. We learn of his woes from exposition-friendly sources like text/voice messages on smart phones that get viewers up to speed quickly about the depths of his despair. From there, we see how he falls under the spell of a mysterious lady love.