This week, I posted about the Hanakori Korean Independent Animation Festival which will screen Korean animated films online in Japan next week. I posted my interview with director Yuko Watanabe about her short Boy Sprouted. I also posted the first part of the trailer post. This week, I’ve watched High and Low (Dir: Akira Kurosawa), The Graceful Brute (Dir: Yuzo Kawashima), The People Under the Stairs (Dir: Wes Craven), Armour of God II: Operation Condor (Dir: Jackie Chan), Candyman (Dir: Ni DaCosta) all in preparation for a Heroic Purgatory talk on Parasite (which I also watched).

An omnibus film where each story featuring several actors trying to find the best way to shoot during the Covid-19 pandemic.

Synopsis: Ako, an aspiring photographer, and San, a freelancer, begin living together in a wooden house with a mutual friend. In various vignettes, we see how the uptight and meticulous Ako gets involved with the sloppy and carefree San.

Synopsis: A documentary that looks at the relationship between education and politics through the changes in textbooks. It appears to be based on an award-winning TV show which was broadcast on Osaka’s Mainichi Broadcasting System in 2017. The film version has additional interviews and reconstructions. Director Hisayo Saika has covered the field of education for Mainichi Broadcasting System for over 20 years and reveals a crisis looming over the field of education through interviews with editors and authors of textbooks, as well as teachers and researchers who have endured attacks from right-wing groups as they attempt to teach topics like the comfort women issue. 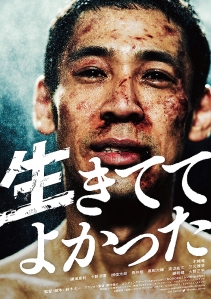 Synopsis: Sota Kusunoki’s body has been destroyed after failing for years to make it as a professional boxer. However, despite a doctor and his wife Sachiko trying to convince him otherwise, Sota feels he has nothing but boxing and as he fails to fit into society and his relationships become strained, Sota starts fighting again, only this time it is for big money in the underground circuit…

Drive into the Night

Tomomitsu Adachi of The Sower gets to star in this film.

Synopsis: Taichi Akimoto has hit his 40s and yet he still lives with his parents and has a dead-end job working at a small town scrap iron factory where he gets little respect. His friend Taniguchi is doing a little better but still leads a boring life. Waking one morning, after a drinking session, Akimoto finds a corpse in the trunk of his car…

An omnibus film made up of three stories set on a fictional island in Okinawa. It was made by three directors from the Film Society of the University of the Ryukyus and features many entertainers from Okinawa.

Synopsis: The stories take place on the island of Gurama. It is there that an unexploded bomb dropped by the U.S. military during World War II is found. The story “Aunt Reiko”, directed by Tsutomu Makiya, sees Reiko, an opera singer who has lost her voice due to an unknown illness, find the cause thanks to a psychic called “Yuta”. Yuji Nakae’s segment “Haruko and Hideyoshi” sees a young man try to escape being married to a local girl. Hayashi Toma’s “Bomb Kids” sees two young islanders try to make money from the unexploded bomb.