A Song I Remember 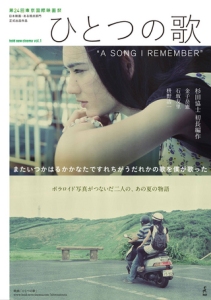 A Song I Remember is slow and restrained in its rhythm and storytelling. It withholds information as it asks audiences to follow a young man’s daily life in Tokyo and pay attention to a sparse set of seemingly random encounters with events and people. In these moments are odd details that stick in the memory and, by the end, these details build a context that acts as a stage for an emotional knockout blow delivered by the actors.

I’m getting ahead of myself here, rushing to the end without talking a little about the film’s beginnings.

A Song I Remember was the professional feature debut of Kyoshi Sugita after an early start acting as assistant director on projects helmed by the likes of Kiyoshi Kurosawa, Shinji Aoyama, Nobuhiro Suwa, and Makoto Shinozaki. It got its premiere at the Tokyo International Film Festival 2011 before a theatrical release in 2012.

We follow Takeshi (Takenori Kaneko), a young man who works as a gardener and spends free time fulfilling his hobby of being an amateur photographer. Armed with a Polaroid 600, he takes pictures of people at train stations, his favourite sort of subject and location. After he walks away from taking a snap of one particular commuter he witnesses the tail end what could be an accident or a crime. It is never explained but it troubles Takeshi.

It is never explained… Sugita favours restraint in his storytelling. As seems to be his style, he keeps highly dramatic and tragic moment off screen and leaves it to the imagination of the viewer to piece together what happens from clues (sound effects and props, actor reactions) until the ending delivers clarity and the audience to make sense of what is going on.

Following this, Takeshi roams the outer fringes of Tokyo.

The film is observational, slow, and deliberately so as we watch Takeshi as he mostly wordlessly engages with the world. Long shots capture him silently cutting grass with his taciturn colleague, quietly taking photos of teens doing street dance in Kichijoji, and, with an air of great formality, buying film from a young woman named Toko Hibino (Yuri Ishizaki) who runs a small photography shop.

Time feels distended as scenes play out and we are absorbed into the slow rhythm of summer and people gingerly interacting. There is no clunky exposition as the film features long dialogue-free passages. This lack of dialogue and Takenori Kaneko’s reserved performance suggests a character who is shy and prefers to interact with the world through photography. He is an observer whom we observe but having to buy rare film for his camera means that he has to make contact with Toko who brings him, and the audience, to different places and to unexpected connections to the incident at the top of the film.

Initially, while watching, I thought Sugita’s commitment to chronicling the everyday and inconsequential might be because the film is an ethnographic study of sorts or a Chantal Akerman slow cinema piece – A slice of life with an introvert! But Sugita’s clues pile up as we link together moments like Takeshi’s reaction to a song half-remembered and a photograph given to him. The sight of a half-filled diary is a stark and poignant one that takes up massive amounts of meaning. Eventually, by the end of the film, once the pieces fall into place and we understand the meaning of the title, it leads to a powerful moment that certainly crept up on me. Both actors, giving fantastic naturalistic performances, deliver an emotional release that I got caught up in as I found myself crying over a character’s reaction to a photograph. The sense of everything coming into place and the subtle way the story is told was satisfying.

To say more would be to spoil it but this film is highly recommendable and should be watched multiple times because more things become clearer and more profound.

Currently, Sugita’s latest film Haruhara-san’s Recorder is in mini theatres in Japan after a festival run that accrued some accolades. It is his third film and, by all descriptions, it sounds like a refinement of a style that favours distance and subtlety which can be used to describe his first feature which is well worth watching.

You can watch A Song I Remember (with English or French subtitles) at the Institute Francaise website for free until February 08th.