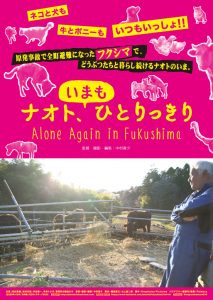 “He has a heart. Only a person with a heart would do what he is doing.” I’m paraphrasing the words of Shinichi Hangai in his description of Naoto Matsumura, a former builder who, in the aftermath of the 2011 Tohoku earthquake and tsunami, stayed behind to care for Hangai’s cattle when people living in the shadow of he Fukushima nuclear reactors were ordered to evacuate. On top of farm animals, Matsumura became a guardian to a whole host of other creatures great and small in an extraordinary story of humanity in the face disaster. A decade on from the 3/11 disaster, director Mayu Nakamura releases an update on Matsumura who remained near a danger zone to continue with his selfless act.

A sequel to the 2015 documentary Alone in Fukushima (which I haven’t seen), this film is the result of eight years of visits that director Nakamura undertook to follow Matsumura as he continued to live in Tomioka town despite the threat of radiation. It is a place which lies partly in the no man’s land zone surrounding the Fukushima nuclear reactors, buildings that Matsumura’s construction company helped erect, and where parts of it are cordoned off as decontamination occurs. Living off compensation money from the plant’s operator TEPCO, Matsumura resisted pressure to leave the town and took care of many animals. These creatures are a veritable menagerie of beasts that include cats, dogs, boars, cows, and, in an eye-brow raising sight, ostriches – these had been kept as mascots by the powerplant. Over the years of filming, the number of animals shrink while the humans grows as people gradually return to the town.

Despite the odd drone shot and use of tripods, Nakamura opts for a handheld camera to show us this strange reality. This roots us on the ground in Tomioka, a ghost town that has a feeling akin to a setting for an episode of The Twilight Zone or maybe Andrei Tarkovsky’s Stalker as we see an empty town and its outlying farms being reclaimed by nature. Early in the film, starting in 2013, Matsumura strikes one like the protagonist of a post-apocalyptic story, an Omega Man of sorts as he travels lonely roads and traverses an empty town. His rough-hewn patience and black sense of humour mean his lifestyle is deceptively laidback as he deals with the seriousness of the situation as well as the inhumanity of officialdom and charities wanting to take away animals, either to destroy or save them. For his part, he offers care and attention that are inspirational. 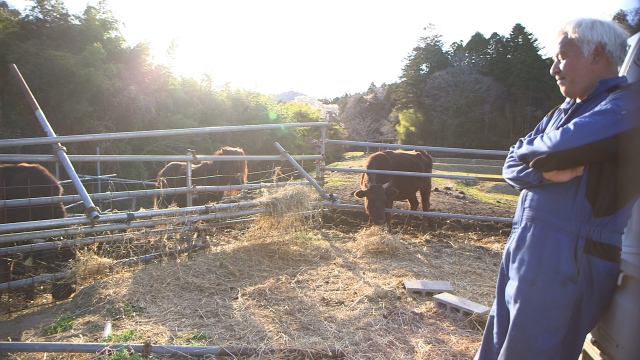 Indeed, while it is sort of amusing to see animals roaming around carefree, there are grimmer images such as the bones of cows left tethered in a shed to starve to death, a tragic sight of what the government forced farmer’s to do in fear of radiation. This makes Matsumura’s act of kindness a stark contrast to grim reality. There are many more images and stories to be seen and heard that talk of further betrayals and false promises such as TEPCO museum of energy, its walls adorned with cute illustrations but the building left vacant due to the evacuation, as well as Matsumura’s observations over the changes in a town which was once all dirt roads before the plant came and pumped money into the area.

In the more recent years of filming, it is fascinating to see how the reclamation and redevelopment erases parts of the old Tomioka topography and invites in a new generation of people. Even this return offers what feels like more false promises as Matsumura points out the lack of children and lack of direction for the town. A newly-opened supermarket and a fancy new railway station suggest further growth but viewers will wonder where the people are to take advantage and generate activity. In effect, it is all window dressing or a white elephant designed to give the façade of normality.

Throughout it all, Matsumura and his neighbours, the Hangai’s – a farming couple who eventually return to their property – act as good guides to a forbidden zone. Their resolute attitude towards staying in the town and restoring some semblance of tradition is heartening but they also have a clear-eyed view of how people’s response to the disaster suggests normality is still a long ways away – if it ever returns. This is something which feels like it has come out of living through a nuclear disaster and understanding that things really could go wrong again but, in the meantime, they might as well do their best and look after the land and all who dwell on it.

Alone Again in Fukushima played in the Cinema with Us 2021 section at the Yamagata International Documentary Film Festival 2021.

You can contribute to a crowd-funding initiative to get this screened theatrically here.

Here’s a talk about the film with director Mayu Nakamura, Naoto Matsumura and others: