Double Layered Town / Making a Song to Replace Our Positions 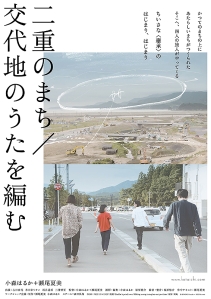 From an outsider’s perspective, the destruction inflicted by the 2011 Tohoku earthquake and tsunami wiped away whole towns, cities, and lives from the landscape of North East Japan. For people who lived through the disaster and remain alive, those things never disappeared, they still exist as memories underneath the changed landscape. This is the sense captured by Double Layered Town / Making a Song to Replace Our Positions, a documentary that records a workshop designed to bring out these memories.

The project began after filmmaker Haruka Komori and Natsumi Seo, a painter and writer, moved to live and work in the city of Rikuzentakata, Iwate Prefecture following the disaster. It appears that part of their contribution to the recovery process was the creation of workshops such as the one seen in this film where they pair outsiders with local people who give experiences of the disaster or memories of the area and people that existed before the devastation. After two weeks of shadowing citizens, the travellers recite what they heard and weave those memories together with a fictional story set in the year 2031 (that Seo wrote), thus participants bridge the past, present, and future of the land and its people through their words and bodies.

The experience of watching this film is a little like participating. None of the rules are explained by the filmmakers and there is no on-screen text or intervention by the people orchestrating the workshop to explain the point. We are put in the position of the travellers as we see the changing landscape through drone shots and static cameras, and then get the intimate moments via handheld cameras as we observe the four young individuals participating – all of whom were children living far away from the area at the time of the disaster – entering homes, cafes, and workplaces, listening to locals and then reciting the stories. Occasional direct-to-camera interviews with the travellers help to underline the emotions they feel and ideas that occur to them as they gain a better understanding of how the inhabitants mediate their present reality of rebuilding, something which has covered over places to elevate the land and prevent another disaster but not eliminated the memories and places that haunt them. However, there is a limit to what the documentary explores.

While the film successfully draws out the notion that these ghosts still exist through various testimonies and the sight of reconstruction, what the locals feel remains opaque. We hear emotive stories such as one of a mother who lost her two children and another of a family who refuse to leave the town they love, but there is no follow-up with how the locals are affected by the project or life in general. Put this down to the sensitivity of the filmmakers. While some viewers may be frustrated, one can definitely detect that there is a healing process involved in this story relay as tragic oral history mixes with the positive fiction of a future as people carry on living. One can guess that telling stories offers some catharsis as the locals know that others can hear and remember the things and people that they feel are important and sometimes that is enough. Perhaps to pry any further would be to cross a boundary of decency.

Whatever the case, it was an interesting experience to participate in. It provides a new way to understand the 3/11 disaster, one that avoids dry factuality or unseemly sensationalism. Through this unique workshop, a love of the land and its people is carried over and the film documents a new normality that still retains the ghosts of old that will be carried forward into the future.

My review was first published on V-Cinema on September 15th