This is the first of a two-part trailer post. I’m a bit slow at doing things but steadily knocking down targets. I finished my review of Double Layered Town / Making a Song to Replace Our Positions and that was posted on V-Cinema. As for this blog, I posted about the line-up of the 2021 edition of the Kanazawa Film Fest and I posted my review of To Sleep so as to Dream. 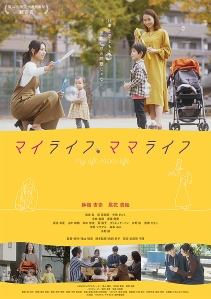 This film won the Audience Award in the Competition section of the 2020 edition of the Tanabe-Benkei Film Festival and tackles the idea of motherhood through portraits of two women.

Synopsis: Aya is a career woman who is resistant to her husband’s demand to have a child. When she is put in charge of a project called “Family Study Abroad,” she meets Saori, a woman raising two children who also has her share of frustrations as she has had to give up a dream job. Will the two women influence each other to find balance in their lives? 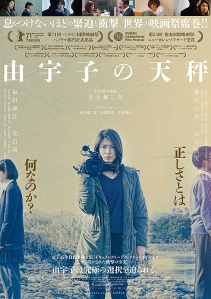 Yujiro Harumoto made waves with his feature debut Going the Distance. He has a great cast of actors for his latest, a social drama as seen through the eyes of a documentarian played by Kumi Takiuchi (Greatful Dead), an actress who is really coming into her own in recent years with her performances in Kamata Prelude and It Feels So Good. This has previously played at last year’s Busan International Film Festival and also Tokyo FILMeX and it has won awards. I watched it as part of the New York Asian Film Festival 2021.

Synopsis: Yuko (Kumi Takiuchi) is a documentary filmmaker determined to examine a case of a double-suicide involving a teacher and a student who were subject to rumours of an improper relationship. It is a hard programme to make as she aims to get a balanced view of the truth. However a scandal involving her father (Ken Mitsuishi) and a student at his cram school threatens her career, their livelihoods, and her sense of justice. She is faced with a tough situation…

Ghost in the Shell 4K Remaster 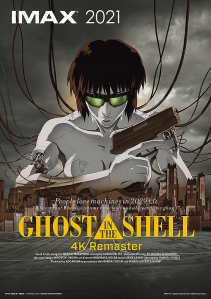 The Ghost in the Shell franchise started life in 1989 as a manga by Masamune Shirow (Black Magic, Appleseed, Dominion Tank Police) before being adapted into an anime film by Mamoru Oshii (Urusei Yatsura, Patlabor, The Sky Crawlers) in 1995.

I talked about it recently for a Heroic Purgatory podcast! Please listen!!!

Synopsis: The film takes place in 2029, a time when technology and the internet have advanced far enough that nearly all of humanity is cybernetically augmented and able to roam between real and virtual environments.

The story follows Major Motoko Kusanagi and her team at Public Security Section 9 who are on the hunt for a cyber-criminal known as The Puppet Master, a prolific “ghost hacker” who breaks into and takes control of human minds. It soon becomes apparent that The Puppet Master is part of a wider conspiracy wherein another government agency has created an artificial intelligence which has become sentient…

Eternally Younger Than Those Idiots 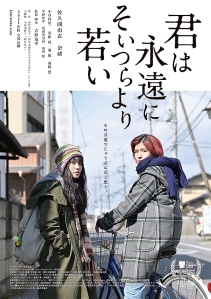 This is based on a prize-winning novel and played at the Tokyo International Film Festival last year.

Synopsis: Sayo Horigai is an ordinary young woman merely waiting for the day she graduates from university and gets employed in the area of child welfare. This is when she falls in with a girl named Inoki, a fellow student. A unique friendship springs up but Sayo begins to sense violence and sadness dog her heels. This leads to a story of painful revelations of hidden histories, all of which emerge after a friend dies… 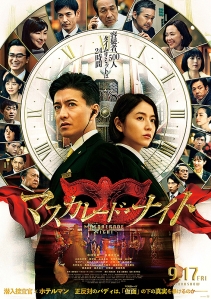 This is based on the third entry in a novel series written by Keigo Higashino where a detective and a hotel concierge work together to crack cases.

Synopsis: When the Tokyo Metropolitan Police Department receive an anonymous fax, they learn that a criminal suspected of a killing at a condominium plots to commit a murder at a New Year’s Eve countdown party named “Masquerade Night,” an event that will be held at Hotel Cortesia Tokyo. Detective Kosuke Nitta (Takuya Kimura) of the Metropolitan Police Department’s Investigation Division 1, once again goes undercover at the front desk of the hotel where he teams up with Naomi Yamagishi (Masami Nagasawa), who works as a concierge. With 500 people in elaborate costumes and zero information, they have their work cut out trying to stop the criminal! 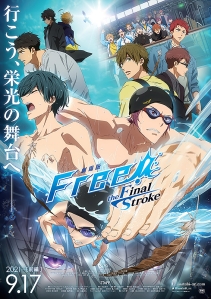 Synopsis: With their high school days over, the swimmers dive into the future. The focus is on Haruka Nanase who is a student at Hidaka University in Tokyo. When he meets old classmates, negative memories about his time on the swim team resurface but in order to become a champion swimmer on the international circuit, he must overcome them and other obstacles. 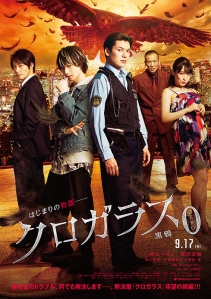 Synopsis: This is a prequel film in the Black Crow series which shows the action that happens with a group of problem solvers who work Shinjuku’s Kabukicho district. We see the hidden past of the series protagonist, Kuroto, back from when he was a rookie police officer working with corrupt colleagues. Kuroto finds it hard but an ally emerges with a more senior cop who takes him under his wing. The two investigate a series of robberies that occur at the hideouts of criminal organizations.