This is the follow-up to yesterday’s trailer post. This week I posted interviews with Yutaro Nakamura, director of A New Wind Blows, and Shinji Imaoka, director of A Rainbow-colored Trip.

I watched around ten Stephen Chow films, the 1972 film Bone, and The Quiet Family in preparation for a Heroic Purgatory podcast recording.

Illustrator and columnist Naoko Sumimoto makes her feature debut with this film that mixes live action with images and animation.

Synopsis: Marino lives in Tokyo and works part-time at a coffee shop. She suffers from “bedsore” pain due to sleeping too much. All of that sleep sounds as if she wants to keep away from reality. When she learns that one of her regular customers, Mamoru, works as a bedding salesman, she decides to buy a new futon. From that decision comes changes: Marino begins to see shadows in her house, she begins to dance, something she could not do before, and her childhood friend Minori reappears. Marino’s quiet life begins to waver little by little.

This movie is an adaptation of a manga by Naoshi Arakawa, the creator of Your Lie in April. It is a prequel to the TV anime. While that is set in a high school, this is set in a middle school.

Synopsis: 14-year-old Nozomi Onda loves football and has played the sport with boys since she was a child. She has amazing technique and she works hard but now that she has entered junior high the physical differences between her and the boys are beginning to tell. Despite this, she asks her coach to let her play in an official match where her childhood friend is involved. He once told her that there was no way a girl could compete with a big boy and Nozomi is determined to win the match and prove him wrong…

Synopsis: Twelve years have passed since the end of the second Neo Zeon War (Char’s Rebellion) and the Earth Federation government is more corrupt than ever, its leaders allowing pollution and persecution of civilian populations to happen on a massive scale.

A rebel organization named “Mafty” has emerged and its leader, “Mafty Navue Erin,” orchestrates a campaign of terrorism and assassinations aimed at the Federation government. It has gained popular support but Mafty Navue Erin has not revealed their identity. This person is actually Hathaway Noa, the son of Bright Noa, an officer of the Earth Federation Forces. Hathaway was on the Federation’s side during Char’s Rebellion but became disillusioned. Now he secretly leads a rebellion but his destiny changes when he encounters the Federation Forces officer Kenneth Sleg and a mysterious young beauty named Gigi Andalucia. 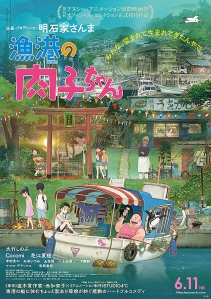 Synopsis: Living in a fishing port, the gourmand and brainy Nikuko-chan is compassionate, loves to fall in love, and is easily deceived by men. Her 11-year-old daughter Kikuko, who is cool and firm, is a little embarrassed by her mother. Eventually, the secret between mother and daughter is revealed, and the best miracle comes to them.