The Many Faces of Chika

またの日の知華 「Mata no Hi no Chika」

Following on 11 years from their award-winning documentary A Dedicated Life (1994), husband-and-wife filmmaking team Kazuo Hara and Sachiko Kobayashi made The Many Faces of Chika, their first and only fiction feature. Although drawing from history, the mysterious nature of the central character makes it into an allegorical film about the male gaze, the subjection of women, and the destructive nature of passion, interlinking these ideas with the destruction of leftist movements. It has a dreamy air to it that stands in contrast to the usual dedication to realism that Hara and Kobayashi have consistently shown in their work and it makes the experience absorbing in its own way.

For this project Hara assumed directorial duties while Kobayashi penned the script as well as her acting as producer. This is in line with her first forays into cinema as she attended writing classes taught by politically active New Wave directors such as Kaneto Shindo and Nagisa Oshima in the late 60s and early 70s. Kobayashi’s screenplay for The Many Faces of Chika uses the cultural and political upheaval of that very time period as the background for a drama that has an experimental conceit: four actresses play the part of the eponymous Chika to portray the different ways she is perceived through the eyes of different men.

END_OF_DOCUMENT_TOKEN_TO_BE_REPLACED 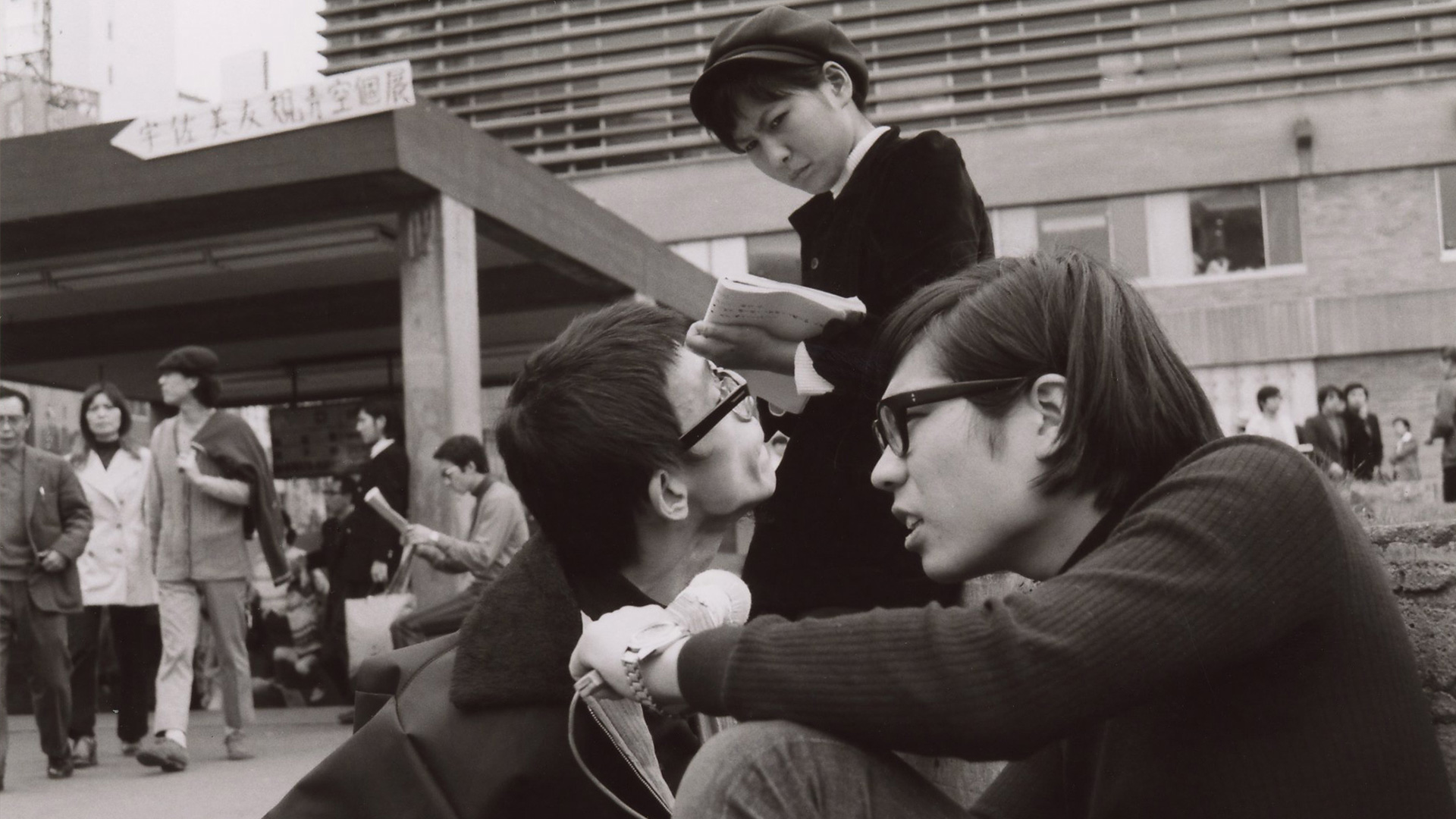 This is the third and final trailer post for this weekend – part one here, part two here. This week I have also been posting about the Japan Society’s season of films by Kazuo Hara and Sachiko Kobayashi, specifically reviews for their early works Goodbye CP, Extreme Private Eros: Love Song 1974, and The Emperor’s Naked Army Marches On.

The Hara-Kobayashi films have made up my viewing schedule and I covered everything except MINAMATA Mandala. I also finished Psycho-Pass Season III.

END_OF_DOCUMENT_TOKEN_TO_BE_REPLACED

This is the second of this weekend’s trailer posts. One went up yesterday and the other will go up tomorrow.

What was released this weekend???

Synopsis: The Kawasaki Brave Thunder basketball team get another documentary, this one culled from 400 hours of footage that shows them in action in the B.League professional basketball league. Expect the usual behind-the-scenes footage and on-court action as well as interviews with players and officials.

END_OF_DOCUMENT_TOKEN_TO_BE_REPLACED

The Emperor’s Naked Army Marches On

The Emperor’s Naked Army Marches On is regarded as one of the finest documentaries ever made. It derives its power from its subject, a World War II veteran and political agitator named Kenzo Okuzaki who is on a quest to expose war crime by any means necessary. In his journey he ends up indicting Japanese society and its silence over the war. The idea of a documentary about him was first envisaged by Shohei Imamura but due to the refusal of television companies to touch such a controversial subject, it fell to Kazuo Hara and Sachiko Kobayashi to film it.

END_OF_DOCUMENT_TOKEN_TO_BE_REPLACED

This is the first in a three-part trailer post because 18 films have been released this weekend.

Winner of the Grand Prix and Audience Award at the Osaka Asian Film Festival 2021, Ito is the first solo feature film from director Satoko Yokohama since her 2015 drama The Actor. Her cinematic return is set in Aomori Prefecture, the birthplace of Yokohama and also of the film’s lead actress Ren Komai.

I saw this as part of the Osaka Asian Film Festival earlier this year. I found it a charming film. You can read my review here and my interview with the director, Satoko Yokohama, here.

Synopsis: High schooler Ito Soma (Ren Komai) is a gangly girl who hails from Itayanagi, a small town outside Hirosaki city. She has a timid nature and a thick Tsugaru accent which makes her sound a bit like a hick. However, far from being a hayseed, Ito is very knowledgeable about her local culture and dialect and she can also play the shamisen, a three-stringed instrument that is particularly popular in Aomori. This skill is something she picked up from her grandmother (Yoko Nishikawa) and a massive part of the few memories she holds of her late mother, a talented shamisen player in her own right. Alas, Ito refuses to practice and stays silent due to her embarrassment over her country roots and also her melancholy over never having known her mother. However, it is through fully embracing these factors that Ito can eventually unlock her ability to express herself. What puts the girl on the path of self-acceptance and self-expression is an unlikely job at a maid café in Hirosaki City.

END_OF_DOCUMENT_TOKEN_TO_BE_REPLACED

Released two years after Goodbye CP, Extreme Private Eros: Love Song 1974 finds Kazuo Hara turning the camera on his own life by filming Miyuki Takeda, a radical feminist, the mother of his son, and his ex-wife. Hara narrates this documentary, which he describes as an attempt to stay connected to Takeda, and films her in intimate situations to work through his unresolved feelings, going so far as to invite his collaborator/girlfriend Sachiko Kobayashi as an actor used to stimulate drama.

Once again using a handheld camera and black-and-white film, Hara spent periods from 1972 to 1974 documenting Takeda’s life as she moves from Tokyo to Okinawa with their infant son, embarks upon relationships with a woman named Sugako and then a Black American G.I. with whom she gets pregnant, then returns to Tokyo to give birth in Hara’s apartment completely unassisted.

END_OF_DOCUMENT_TOKEN_TO_BE_REPLACED

Goodbye CP (1972) was the first artistic collaboration between Kazuo Hara and Sachiko Kobayashi, two photographers who became a husband-and-wife director-and-producer team who have spent the last 50 years documenting the lives of people living on the margins of Japanese society and agitating against its strictures. Through recording those who live differently, their works have shone a light onto points of conflicts based on identity, history, and class, and they reveal the social fault lines that the establishment chooses to ignore. With Goodbye CP, the conflict is between the able-bodied and the disabled.

Shot at a tumultuous time of student protests and when disability rights campaigns were taking on long-standing prejudices and disabled people were hidden or, in some cases, sterilised, and also when public awareness of Minamata disease was high, Goodbye CP was made to be different. While other documentaries might try to curry audience sympathy through depicting their subjects with sentimentality or lionising their struggle to live while disabled, Hara and Kobayashi’s film addresses audiences in a confrontational way in order to shake up views.

END_OF_DOCUMENT_TOKEN_TO_BE_REPLACED

I hope that you are all safe and well.

I’m careening from one thing to another. I started the week writing aboutthe Udine and Cannes film festivals before posting a news article and interview with the curator of a season of documentary films made by Kazuo Hara/Sachiko Kobayashi which are available to stream in North America via Japan Society. I’ll be reviewing these films over the next week. I also posted trailers yesterday.

This week I watched Assault on Precinct 13, Ronin, and the first half of Psycho-Pass Season 3. I also watched the Hara/Kobayashi films Goodbye CP and Extreme Private Eros: Love Song 1984.

END_OF_DOCUMENT_TOKEN_TO_BE_REPLACED

Here is the first part of a two-part trailer post!

The Fable: A Contract Killer Who Doesn’t Kill

The first film was highly enjoyable up until the extended (and overly long) finale and I felt that it captured the manga perfectly. The trailer indicates that the stunts and action have grown even more grandiose!

Synopsis: Akira Sato (Junichi Okada) is the legendary killer known as The Fable. He is continuing to keep a low profile in Osaka with his partner Yoko (Fumino Kimura) as they pretend to be ordinary siblings. He maintains his part-time job at a design company called Octopus where his boss, Takoda (Jiro Sato), and colleague/love interest, Misaki (Mizuki Yamamoto), are unaware of his hidden life of assassinations. The team at Octopus become the target of extortion when a seemingly innocent NPO run by a seemingly nice guy named Utsubo (Shinichi Tsutsumi) brings in a contract killer Suzuki (Masanobu Ando) to get money out of them. Akira must step in and use his skills.