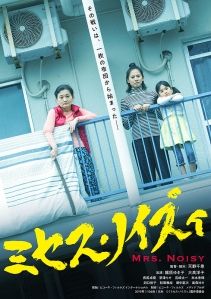 Words develop a life of their own. Once a person releases them into the world, they travel far and wide and can change form depending upon the person interpreting them. This is why you should be careful with what you say and what you write. This something that a writer neglects to remember much to her cost in Mrs. Noisy, a domestic comedy that turns into heart-breaking drama by way of literary struggle.

Inspired by real-life events from 2005, the film follows a conflict between two neighbours in a danchi (housing complex).

Our protagonist is Maki Yoshioka (Yukiko Shinohara), a once successful novelist who is struggling through a prolonged slump. The reason? According to her editor, her characters are two-dimensional. With each work he turns down the more desperate she becomes. With a deadline looming, moving to a new home with her daughter Nanako (Chise Niitsu) and husband Yuichi (Takuma Nagao) promises a fresh start but things go awry soon after Maki finishes unpacking as her neighbour, Miwako Wakata (Yoko Ootaka), starts infringing on her life.

Miwako is a flinty middle-aged lady who lives with her reclusive husband and has a habit of thwacking her futons while also singing loudly on her balcony at different hours of the day. This noise often disrupts Maki’s work just as she’s about to hit a moment of genius. Maki really takes offense over perceived social slights that come when Nanako slips out and disappears all day while she is too busy writing to notice. Nanako returns to find Maki in a panic only to inform her mother that she was either at the park or at Miwako’s apartment. When the older woman scolds Maki over her poor parenting, the police get involved and neighbours start to gossip. This is when Maki becomes really hostile and quarrels begin.

The film gets into gear once the domestic war starts. It is one where the weapons of choice in the Battle of the Balconies are barbs, brooms, and boomboxes. The dust-ups between the women devolve into slapstick comedy for onlookers in the surrounding community and, eventually, the internet after Maki listens to her irresponsible social media savvy cousin Naoya (Raiki Yonemoto) and turns her conflict into a series of online blog posts where she creates a caricature of a nutty neighbour who kidnaps little Nanako. Soon a book deal with a sleazy publisher enticed by the notoriety is in the offing and it looks like Maki has found her authorial mojo again but once the media get a hold of her words they turn it into a cause célèbre and it soon spirals out of control as Miwako is made into a monster. When the true nature of Miwako and her husband emerges, it gets a lot more complicated than expected.

The build up is gradual but it benefits from all of the everyday details in routines and behaviour that writer/director Chihiro Amano draws upon. Audiences will find a universal story of the fundamental difficulties in trying to balance career and family, Amano intertwining the quotidian aspects of Maki’s life with scenes of editorial meetings and writing to create her underlying sense of anxiety that leads to the conflict. While Miwako’s absurd behaviour and admonishment may be the spark that lights the fire of conflict it is mostly Maki’s self-doubt that is the kindling since it is clear that their dispute is merely where she channels her guilt and frustration over failing as a mother and writer.

Both Maki’s desperation to make it and her weaknesses as a writer – her inability to add depth to characters – play into why she cannot see more to Miwako other than a nuisance neighbour and this organically leads into a situation ripe for media sensationalism. Maki’s words set the parameters of the conflict between the two women and the media take it into a particularly nasty phase. The details of how things go viral online and on variety shows hit notes of believability and Amano takes advantage of the various formats to show how a recording of a particularly laugh-out-loud funny fight is parasitically used for ratings with little room for humanity which leads audiences into the final third of the movie where the roles are surprisingly reversed.

Stage actress Yoko Ootaka gives a fine comic performance as Miwako who comes off as a fierce ogress who bellows and rages and bashes down walls but when there is a radical shift in perspective to give us more background, her performance softens remarkably so that there is a new view of her character. It’s foreshadowed via props she hands to Nanako and how she treats the little girl, but Amano’s choice to frame things from Maki’s perspective prevents all but the most observant and objective viewer from piecing the clues together so it is easy to become prejudiced against Miwako.

It isn’t until the full picture is unfurled, effectively after many in the audience have probably taken Maki’s side, that we discover how little we knew of this human being whose life and behaviour the writer had turned into a parody. Indeed, the final scenes are a devastating reversal and I was in tears over how the older woman was treated by the media. Maki is put through similar treatment and loses her capacity with words to explain her actions in front of the media. While this is offered as a chance of redemption at the end, it felt a little too easy for her to get off the hook, so believable and heartrending was the humiliation that Miwako had  been put through.

Whatever the case, the film makes the case of how thoughtless words can severely damage people. It is something I struggle with myself so I appreciated that the film made me think about it. I highly recommend this drama, a surprising and very moving depiction of the power of words over everyday lives.