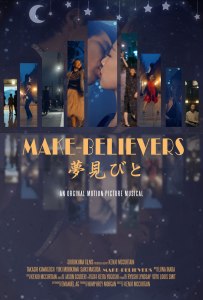 When I think of musicals, it is usually the big, brassy, and ballsy American studio productions that transport audiences to a heightened sense of euphoria through elaborate sets given a Technicolor sheen, widescreen views, honking energetic scores, and dancers like Gene Kelly and Fred Astaire tripping light fantastic.

From Busby Berkeley, to Baz Luhrmann (Moulin Rouge), to Damian Chazelle (La La Land) and, beyond Hollywood, the bonkers Bollywood productions in India that go the maximalist route, my expectations for musicals have been set so high that it is easy to forget they can be small and intimate affairs where the spectacular is toned down to capture the most intimate.

Which brings me to Make-believers, a film on the indie end of the spectrum which I found on Kickstarter a year ago. It is billed as a romantic musical that aims to be “a first-of-its-kind, Hollywood-influenced, musical romance set in Japan.” In its way, the film succeeds as it has the requisite parts and puts them together successfully. Tone down expectations of glamour and sweeping emotions and you have a fun and sweet indie musical that utilises some dazzling costumes and agile dancers to make cute dance sequences which are built into a solid dramatic core featuring a universal story of being true to oneself.

Make-believers opens in a club in Tokyo where one man is looking for someone to be his perfect fake wife. This man is Masa (Takashi Kawaguchi), a dour and reticent manga writer with aspirations of being a “serious novelist.” This career choice might be the reason he has hit his late 30s and is still single but it’s more likely his closed-off personality. With news that his estranged father is on the verge of death after a stroke, Masa wants to make peace with the old man. Somehow this leads him to think hiring a rental actress to pose as his partner is the answer.

Enter Kanako (Yuki Morikawa), an aspiring dancer who is recruited to fool Masa’s father into thinking that his son has a fiancée. Surprisingly, it works! Kanako has that special magic that allows her to enter people’s lives and charm them – she is genuinely nice and caring, open and outgoing. She is the polar opposite of miserable Masa so, of course, the more time Masa spends with his fake wife, the more he falls for her. But can an authentic connection come from their false relationship? 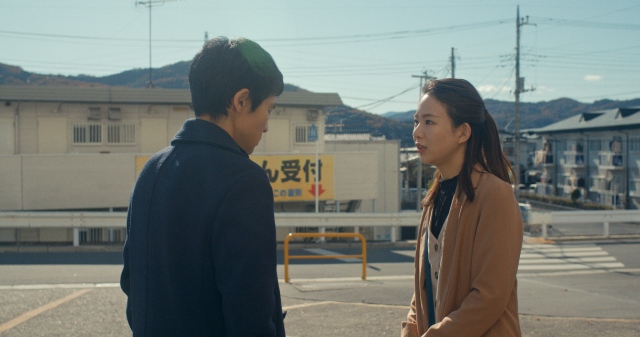 It takes time and a whole subplot about Masa writing letters to Kanako under the guise of a mystery man looking for a shoulder to lean on but, eventually, the two are face to face “dancin’ through the night” and singing to each other about a feeling “drawing me nearer” in musical numbers done with Luna Inaba’s sprightly piano-driven scores. The music has the sensation a sort of Hollywood-esque big band carnival sound at their most exuberant and the lyrics that go along with them are poke fun at dating and love, but Inaba also deals out the gentler tones that gather some heft as poignant moments featuring the protags facing career and romance disappointments, especially when the two leads find their fantasy relationship under stress.

With the whole film rooted in the look of reality the visual acrobatics come from flowing dance numbers for which fluid editing and a spry camera act as perfect partners for the dancers. Transitions from drama to dance are buttery smooth and Kenjo’s direction ensures that the cast have their bodies and faces weaving and swooping across the screen in fun situations or ones that capture the romance of the moment. The dance numbers may not have the heft of Hollywood but they do have the feel of a scaled-down Busby Berkeley movie thanks to some cool choreography from Sayuri Hirayama, and colourful costumes that run the gamut of eye-catching colours of deep reds, perky purples, blaze blues, and energetic emeralds. 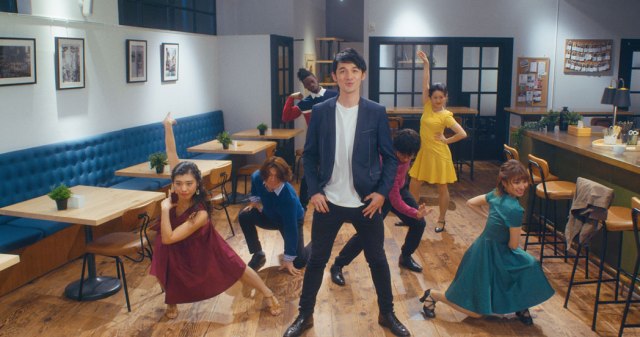 Takashi Kawaguchi, who appeared in Bad Poetry Tokyo (2017), has a challenging task making Masa sympathetic and maybe his character is too opaque to warm to – a line explaining his estrangement from his father would have worked wonders. However, the film finds comedic value in Masa’s behaviour in very funny moments when his “stick-in-the-mud” personality sees him flat out refuse to join in musical numbers and he becomes buffeted by others twirling around him. Ultimately, there is satisfaction in seeing him come out of his shell and finally smile and (spoiler alert!) dance towards the end of the film as he lets go of his seriousness and opens himself up.

Far more vivacious and arresting is Yuki Morikawa who is pitch-perfect, both in singing and performance, as Kanako. She dazzles as she dances across the screen and has the charisma to hold attention. That her character has plenty of agency, despite being roped into Masa’s story, allows the film to have a satisfying and mature ending where her career needs are taken into account and she can prompt character growth for both her and Masa. Morikawa has the acting talent to back up the songs to ensure that this works seamlessly. 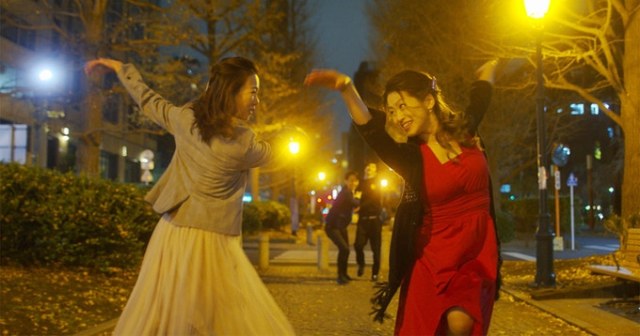 While musicals have a long history in Japan, they are not so much in vogue right now. That written, there have been recently released entries in the genre that span the entire range of experiences from Shinobu Yaguchi’s big-budget and infectiously upbeat pop-music-inspired Dance with Me (2019) to Takashi Miike’s laugh-out-loud off-the-wall crazy black comedy Happiness of the Katakuris¹ (2001), Tetsuya Nakashima’s tragedy-as-experienced by-way-of- colourful-set-pieces Memories of Matsuko (2006), and Shinji Imaoka’s 39-minute low-low-budget short film/star vehicle Rainbow-Coloured Trip (2021) for a pre-teen idol. Make-believers fits in quite nicely on the spectrum.

The film’s fundamental story of breaking out of one’s shell and being authentic rather than just perpetuating dreams is a universal one that is meaningful and offers a hook for its audience thanks to the cast who ably deliver the drama. The song and dance numbers are charming and the whole concoction works well because it has a heart and offers a pleasant time as well as a meaningful story.

¹ Based on the Kim Jee-Woon film The Quiet Family (just to plug an old review!)

This is the latest work from Kenjo McCurtain and Shirokuma Films and it stands in complete contrast to the serious tone of his previous films – a number of his works free to watch on thee Shirokuma YouTube channel.