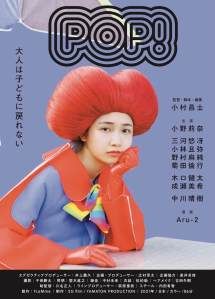 POP! is part of the line-up of MOOSIC LAB 2020-2021. Like entries in the film festival’s previous editions, it pairs together up-and-coming movie and music talents so that they can create a film where music plays a large part in the proceedings, whether through being performed on screen or through a soundtrack that is a very prominent part of the film. In practice, while the fest may feature a slate of films that share similar themes or story set-ups, since each work is coming from different combinations of creatives, the results tend to be unique and a good showcase of the strengths of all involved.

While many of the last round of MOOSIC LAB releases pondered mortality, they each did it in a completely different way, from a laugh-out-loud supernatural mockumentary to a hip-hop infused family comedy, a heart-breaking time-slip movie done through cassette tapes to a gentle post-rock Lynchian adventure. Some are simply music videos stretched out to 30 minutes. A glance at MOOSIC LAB 2020-2021 shows that it is no different as each film looks tonally different with dramas and comedies, some pushing into the experimental and surreal, words which could be used for POP!.

Making his debut feature with this POP! is Masashi Komura, a relatively new filmmaker who has worked on a number of projects including co-writing the screenplay for The Man Who Was Eaten, which was featured at Osaka Asian Film Festival 2016, writing and directing the 2017 film LEO, and appearing in Ken Ninomiya’s The Matsumoto Tribe (2017). His script and direction for POP! create a quirky coming-of-age tale of a young woman experiencing existential drift as she stands on the cusp of adulthood. The final result is a mixed bag of ideas and one that requires patience but it certainly has an atmosphere.