Director Kohei Inoue’s Dong Teng Town netted the Actor Award for Sho Kasamatsu’s performance, and was the runner up for the MOOSIC LAB Grand Prix prize, which ultimately went to Sleeping Insect. His work is, nonetheless, strong, as it gives a dreamlike tale with lead performances full of poignancy that rises above a confused narrative of two lost souls communicating through time and space through cassette tapes as themes of absence and meetings, common in all of the MOOSIC LAB films, are played out quite nicely.

The main story follows a singer-songwriter named Sora (Ryo Sato) who has left her family home and moved into a danchi (public housing complex). The apartment she rents comes with the previous owner’s furniture and a nice view of a neatly manicured park and a playground. To pay the rent she is working at a café rather than making music because she is struggling with her creativity and finding the situation becoming unbearable thanks to her pushy producer (a cameo from Tailwind director Ryo Anraku). As her uncertainty pushes her to a feeling of melancholy she discovers a box of cassette tapes and a tape player left by Tokio (Sho Kasamatsu), the apartment’s previous tenant, and someone who loves Aloha shirts. Intrigued, she starts to listen and becomes absorbed by what he recorded. 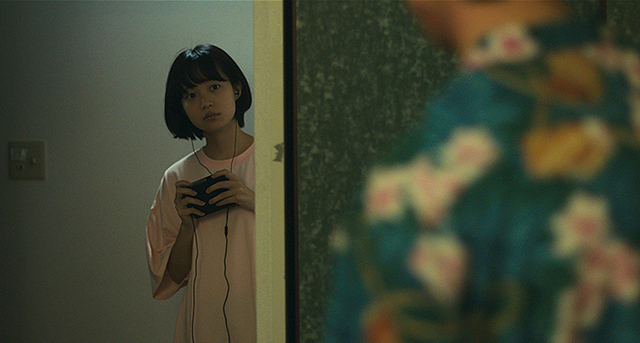 The narrative then gets its second voice, one recorded a year earlier by Tokio who relates his own struggles as a forger specialising in paintings. He is also a son engaged in a toxic relationship with his mother and her lover. Ostensibly the polar opposite to Sora in his situation, the tapes reveal that they share a lot more in common than just the apartment. From sharing the same birthday to a sense of isolation and distance from others, as Sora listens to Tokio, their shared parallel lives begin to offer her comfort and soon their narratives begin to weave together until the characters are interacting like a couple who are dating and she wants to support Tokio in his troubles.

Up until this point, Inoue clearly has Sora as an observer of everything with her character listening to tapes and the scenes transitioning from her present reality to Tokio’s past travails with a simple dolly/panning shot across a location. However, as they interact the narrative becomes cloudy. Add to that two subplots involving café patrons influenced by Tokio, a hypnosis-mad junior high school boy looking to date a girl and a scriptwriter talking about a crime story, and the film’s plotting becomes rather unstuck and feels distracted. There is even a post-credits stinger at the end that undoes every perception of what has gone on before. Mileage may vary depending upon the viewer as to whether these subplots are worth the extra running time in the film but as a viewer, I simply chose to focus on the narrative that I liked the most, that of the interaction between Sora and Tokio who both play out something of a ghostly romance that offered them comfort at a time of loneliness (this reading can be combined with the scriptwriter’s story for maximum tragedy).

Despite this, what holds across the entirety of the film is the beautiful scenery and the good performances from the leads. Shot in Yokohama, director Inoue uses the artificial suburban locations and liminal spaces to create a sense of displacement and also uses geometry and his camera/actor’s blocking to create visually interesting compositions. Sora strumming a guitar in a tunnel with a curved roof that stretches out to infinity, Sora walking along a sea wall and Tokio on a road as the dusk light shines through a cloudbank, Sora sprawled out on tatami and a sofa, her body making a perfect diagonal line. It’s always visually beautiful, probably one of the best of the MOOSIC LAB offerings.

The actors have roles that demand a range of emotions and they essay them admirably. Ryo Sato is cute as a carefree girl and so the contrast when she becomes melancholy and absorbed in the cassettes was notable and felt believable and it leads to a sad song at the end. Sho Kasamatsu, lead actor in Flowers and Rain (2019) puts in an affecting performance with nuances and violent flareups as he moves through frustrations that goes against his gentle nature. The supporting cast are also good and match the atmosphere perfectly.

曇天街, the kanji used in the film’s title, translates as cloudy street and is quite appropriate as it’s never quite clear what is going on and one is left grasping onto nebulous storylines. In adopting different plots, timelines and an ambiguous narrative, it flows cloudily, never quite clear but the film still has its grip and when it comes to the musical moment of this MOOSIC LAB project, the lyrics and beautiful melody do hit home as two floundering people connect.