I hope everyone is doing well.

I hope you are all staying safe and looking for ways to make a positive change in the world. I’ve taken to studying Japanese for a couple of hours as soon as I get up in the morning (05:00) and in the evening (17:00) and I am feeling a little better about myself. I hope to unlock more of my potential.

This week I posted reviews for Tailwind and My Lovely Days. The director of Tailwind kindly commented and retweeted my review on Twitter so I was happy to see my words have a positive effect! It’s a good drama, so check it out. I also posted a preview of the Japan Foundation Touring Film Programme 2021 over at Anime UK News. Expect a preview here next week.

Synopsis: A film partly shot in Taiwan, Malaysia, and Japan, it follows a selection of people experiencing drama such as Taiwanese lady Xiaolan (Yao Pipi) who, when she is about to leave her office, is suddenly slapped by a man, Kanichi (Kazunobu Mineta) who reunites with his childhood friend Ao (Manami Hashimoto) in Yamagata.

A romantic comedy directed by Kiyoto Naruse who received a special jury prize at the Yubari International Fantastic Film Festival 2018 for Night of the Dead Geisha.

Synopsis: A romantic comedy about the perverted son of a temple priest who becomes obsessed with a nursing student whose name he doesn’t know but who passes in front of his temple every day as she meets men via dating apps. Getting her picture becomes a must for him but he becomes jealous when he finds her kissing another man and so he decides to get the same app and pursue her. Meanwhile, his childhood friend Yuka reunites with him…

Synopsis: A new documentary about a training camp run by the record label WACK where female idol groups such as BiSH, BiS and Paradises send their members to be tortured, I mean trained. The suffering took place from March 22-28, 2020 (just before I escaped Japan!!!), before the state of emergency was issued to prevent the spread of Covid-19. This was streamed 24 hours a day on Nico Nico Live and attracted approximately 2.7 million viewers. Watch the tears on a big screen.

The franchise follows Natsume, a teen who can see ghosts and that makes him strange for many people and so he becomes a bit of a loner. However, when he inherits a book about them from his grandmother, he begins to make friends!

Synopsis from Anime News Network: The film consists of two stories: “Ishi Okoshi” and “Ayashiki Raihousha.” In “Ishi Okoshi,” Natsume meets a small youkai called Mitsumi in a forest. Mitsumi is entrusted to wake up the divine youkai “Iwatetsu” from its deep slumber. Mitsumi weighs on Natsume’s mind, so he sets out to help Mitsumi with his task.

In “Ayashiki Raihousha,” a mysterious visitor appears in front of Tanuma. Nearly every day, the visitor visits Tanuma, talks to him a little, and then leaves. Natsume, who knows the visitor is a youkai, worries for Tanuma, but Tanuma enjoys these exchanges with the youkai. The youkai means no harm, but Tanuma’s health slowly starts to deteriorate. 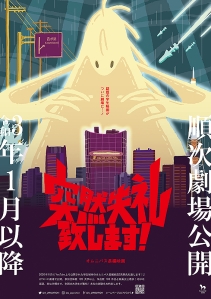 Synopsis: In 2020, during the spread of Covid-19, students from 100 universities across Japan pooled videos together to make an omnibus work. The films are done using various techniques, from live-action to CG, animation and media art. Each work is one minute long. It was pre-screened online for a limited period of two months from September 2020, and the total number of views exceeded 25,000. From January 2021, a special edition of 66 segments carefully selected from the 180 works will be released in theatres (the full version of 194 minutes will be screened in some locations).

Nezura 1964 is a crowdfunded tokusatsu kaiju biopic film that is based on a project Daiei’s scrapped due to difficulties in filming. Called Giant Horde Beast Nezura , this was the precursor to Gamera. The film will feature several cast members from the Gamera franchise. Director Hiroto Yokokawa has been doing a few films where he takes to crowdfunding to revive fallen titles, such as The Great Buddha Arrival.

Synopsis: A movie about the struggle to get Grand Beast Nezura off the ground. It follows Daiei’s struggles after they start production and filming. Difficulties included using live mice in a miniature city. Sounds great for making them look like giant monsters but these mice had fleas and ticks which broke out on the scene and caused health problems. Local government officials even stepped in at one point due to complaints from neighbouring residents, and shooting was cancelled. Only a few images remain of this phantom project which form the basis of this film.