One step closer to Christmas.

I have spent this week watching some of the freshest Japanese films that are due out soon as part of festival work while, in a stark contrast, I posted reviews for two films from the golden age of Japanese cinema: Fires on the Plain and Ten Dark Women. Both films are by Kon Ichikawa and I highly recommend them.

This is what has been released this weekend:

One of the final films of Haruma Miura who tragically passed away earlier this year.

Synopsis: Spanning the years from the Bakumatsu to the early Meiji Period, ‘Tengaramon’ depicts the life of ‘Godai Tomoatsu’ (Miura). Born in the Satsuma domain at a time when Samurai were still a going concern, the arrival of Commodore Perry awakened the awareness that the world was going to change in the young man. Determined to seize the moment and help his nation, he worked as Meiji government officer and then a businessman who laid the foundation for Osaka to become a commercial city. 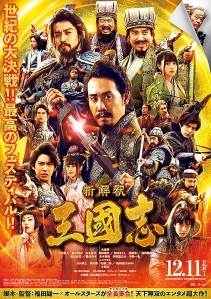 Synopsis: Chinese history gets a comedic remix in this film as we travel 1800 years into the past and enter the warring states period. A military commander, Liu Bei, wishes to unite the land but before that can happen, the “Battle of Red Cliffs“, must take place and none of the players are all that serious…

An omnibus film where Masatoshi Nagase takes the lead role in each story.

Following an earthquake, a bolt in a nuclear power plant comes loose and radioactive cooling water begins to leak from a pipe. A group of men volunteer to stop the leak by tightening the bolt.

Two men go to a house in an area 20 kilometres away from the Fukushima Daiichi Nuclear Power Plant. It is in an area designated as evacuation zone, but an elderly person refused to leave and so when that person dies, these two men are assigned to clear out their belongings.

A woman who has abandoned her family on Christmas night travels to a factory where a man is creating something.

Yes ka no ka hanbunka / Yes, No, or Maybe Half?

Synopsis: Kei Kunieda is a young and popular TV announcer known as “the prince”. He got this moniker from being friendly, handsome and damn near perfect in everything he does but, in reality, it’s a perfect façade because in his private life, he doesn’t make as much of an effort and secretly despises anyone who makes a mistake. One day, Kei meets animation artist Ushio Tsuzuki for a work assignment who discovers the “private” Kei… 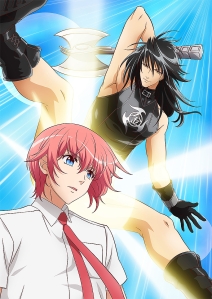 Synopsis: Makoto attends the prestigious Onodera Academy, a place run by his grandfather until the old man passed away. He left Makoto in the care of his school staff and it is revealed that in his will, the old man declared – “The one man who is able to seduce Makoto with his superb sexual techniques will be given the right to take over as Onodera Academy’s new principal!”

Dun, dun, DUUUUUN! Makoto now becomes the target of sexual harassment of every faculty member. Desperate to protect his virginity, Makoto seeks help from his childhood friend (and the man who he has always loved), Kintaro.

Synopsis: 40 years of the Showa period are seen in this yakuza drama which we are taken through by a man named Masaharu (Toshio Matsumoto), who we first meet just after World War II as he and others rejected by society as “unreliable people” set up their own crime family.

Actress and model Serena Motola joins former idol and current YouTuber Michela Sato, in a short film that depicts them as sisters who plan to kill their beloved father after he says he wants to remarry.

Synopsis: Mari (Michela Sato) and Emma (Serena Motola) are sisters who have lived in harmony with their gentle father (Keigo Oka) since their mother left home with her lover 14 years ago. But one morning, their father says, “I want to get married again.” The sisters, who don’t want to lose their father decide to kill him with their own hands and rope in a childhood friend to help them…

Shall We Dance? gets a female spin in this story of two women enjoying  ballroom dancing and revitalising their lives. Chihiro Otsuka and Chika Uchida have good comedy presences and there’s also some social commentary by the looks of things.

Synopsis: Mako Suzuki (Chihiro Otsuka), a busy housewife, and Ichika Jojima (Chika Uchida), a struggling actress, find themselves stepping into the limelight through competitive ballroom dancing. It may sound like a departure for two 30-something women but they have form since they did it in high school and when they try it out again after being reunited at their school alumni party, they decided to form a competitive dance couple to recapture their youth. The two practice hard but there is controversy over the pros and cons of a female pair and also there is a struggle to balance their dream and real life.

Synopsis: A documentary about a Vietnam-era anti-war movement that focussed on tanks that were stationed in a US military repair facility in Kanagawa prefecture in 1972. The U.S. Army Sagami General Depot in Sagamihara City, Kanagawa Prefecture, transported its vehicles via the naval base in Yokohama for return to the battlefield. Japanese citizens blocked the transportation of tanks in a protest that lasted for about 100 days. The film collects testimonies and archival materials from 54 people, including protesters, local shopkeepers, city council members, and experts from different sides. Through this film, an examination of Japan-US relations and the problems of Japan’s post-war Constitution are revealed.