This week I posted reviews for the Kiyoshi Kurosawa thriller Creepy (2016), the experimental documentary Kokutai (2019), and a preview of the next Third Window Film release, The Taste of Tea (2004). My review for the Atsushi Funahashi film Lovers on Borders (2018) was published on V-Cinema on Thursday evening.

Ryota Nakano is famous for his films Capturing Dad and Her Love Boils Bathwater. Both are dramas and both have netted him awards, the former Best Director and SKIP CITY AWARD at the 9th Skip City International D-Cinema Festival, and the latter many prizes, including an award for Best Actress for Rie Miyazawa at the 40th Japan Academy Prize. This one has star wattage that could power a city with ex-Arashi member Kazunari Ninomiya, actors union-starter Satoshi Tsumabuki (Judge!, Villain), Makiko Watanabe (Love Exposure), Masaki Suda (The Light Shines Only There), and Haru Kuroki (The Bride of Rip van Winkle).

Synopsis: Masashi Asada (Kazunari Ninomiya) is an aspiring photographer who has an older brother Yukihiro (Satoshi Tsumabuki) and parents. He enters a photography vocational school and chooses to reproduce scenes of memories of his family and wins an award. After graduating, he works in pachislot but decides he wants to return to photographing his family again and starts a professional career. Then, one day, the 2011 Tohoku earthquake and tsunami strikes…

This one has shades of the documentary A Room of Her Own – Rei Naito and Light and a great jazz score.

Synopsis: Kazuyo Sejima (Wikipedia page) is a world-famous architect who has worked on a number of buildings including the 21st Century Museum of Contemporary Art, Kanazawa (where the Kanazawa Film Festival is held) and she has won the Pritzker Prize, the Nobel Prize in the architectural world. This documentary follows the construction of a building she designed for The Department of Art Science, Osaka University of Arts. Sejima links art, science, and technology to create the new school building that is a “park-like building” on a hill with a good view that anyone could stop by. The documentary recording lasted 3 years and 6 months from the concept to the completion, and was created by Takashi Homma, a photographer who has photographed Sejima architecture since the 1990s. 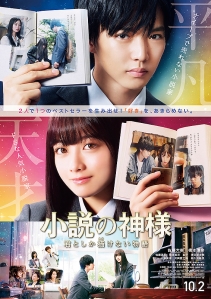 Synopsis: High school students Ichiya Chitani (Taiki Sato) and his classmate Shiina Koyurugi (Kanna Hashimoto) are both published writers, but while Ichiya never made a hit, Shiina writes stories everyone loves to read. One day, an editor asks Ichiya and Shiina to collaborate and write a novel together, but these two have very different personalities…

Synopsis: In an alternative reality, dragons roam the world and in Reverse London, the hidden “reverse” side of the city, witches and wizards must work hard to keep them under control.

Two witches are Noel Niihashi and Ninny Spangcole who are protection agents for Wing Bind (WB), an organisation for dragon conservation and management. Their mission is to protect and manage the dragons within London on behalf of the people.

Synopsis: Masaki and Sho are two students in Oorai, Ibaraki prefecture. Sho introduces Masaki to surfing and through the sport, he begins to make friends but he will also drift apart from them as he grows up. What remains constant is his love of surfing.

Synopsis: The movie version of the 2019 TV anime “BEM”. The story is set in Librati, a city where magnificence and decadence, prosperity and poverty coexist across canals. This is the beat of detective Sonia, who pursues a series of mysterious incidents in the city, including three monster humans, Bem, Bella, and Bello, who work in the shadows helping protect the city from monster threats.

Comedy specialist Koki Mitani works in film, theatre and kabuki. He adapted a manga by Taro Minamoto for a play that was shown at Tokyo’s Kabuki-za in June last year.

Synopsis from Kabuki Web: In 1782 when Japan pursued a policy of national isolation, the merchant vessel Shinshōmaru sailed out from Ise to Edo (the old name for Tokyo) and was caught in a violent storm, losing its sail and rudder. The crew, 17 men under the captain, Daikokuya’s son Kōdayū, lost control and the vessel was left to drift on the open sea.

After 8 months they land on Amchitka island in the territory of Russia. Kōdayū starts his life there puzzled by the foreign language and culture. Some of the crew dies, but Kōdayū survives and sets sail for the Russian mainland in the vessel they make for themselves.

They go further into Russia to carry out procedures of departure. People help them wherever they go and they finally manage to have an audience with Empress Catherine. 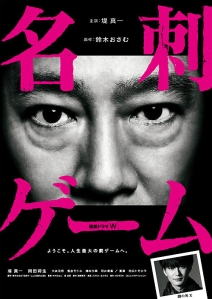 Ryohei Watanabe, director of Shady (2012), adapted a mystery novel into a four-part TV drama for WOWOW. All four episodes of the were broadcast in 2017 and have been packaged up for a limited screening wherein two episodes are put together for A (episodes 1-2) and two for B (episodes 3-4). Another drama was shown in cinemas last week.

There are some really good performers including Shinichi Tsutsumi (Why Don’t You Play in Hell?) who takes the lead.

Synopsis: Kanda (Shinichi Tsutsumi) is a producer for the quiz show “Mystery Spy”. One day, he wakes up in a basement and finds himself wearing a mysterious necklace and surrounded by meishi (business cards) scattered. His daughter Mina (Karen Otomo) is also there and also wearing a necklace. Then, a mysterious man calling himself X (Masaki Okada) appears and informs Kanda that he will play the “Meishi Game” with a 2 hour time limit. The rule of the game is that Kanda has to return to business cards to their owners, but, if Kanda makes a mistake, his daughter’s collar will blow up. Kanda accepts the challenge to save his daughter but…

The latest in the ongoing wave Boy’s Love films, this is the live-action adaptation of a manga which was subject to an anime adaptation in 2010, or so. I remember watching that and finding it entertaining enough.

Synopsis: Izumi Sena comes from a family of famous entertainers but he lives a normal life as a college student studying manga. However, after he stars in a television commercial, he attracts the attention of Ryoma, a super-famous and super-handsome celeb, who begins to pursue him.

Synopsis: This is the movie version of “Idol Sniper”, a serialised story where idols work secretly as assassins. Rei, of the underground idol group “Destiny”, must save the day when members of the dark organisation Shigara sneak into a venue full of fans celebrating their group and their live venue becomes a battlefield.

A film made in 2005. The info comes from the Viennale website.

Synopsis: The search for Yokohama Mary, an infamous former prostitute who went missing over a decade ago, becomes a journey through Japan’s post-war past. Yokohama Mary was a prostitute in the Japanese port-city during the years following the end of World War II. In the decades since then, she became a Yokohama icon of sorts – an eccentric bag lady in geisha-like face paint – until her disappearance in 1995. Filmmaker Nakamura Takayuki sets out to uncover the story of this mysterious figure. In his attempts to separate fact from mythology and to divulge Yokohama Mary’s eventual fate, he sketches a profile of Japan’s past as a country struggling to reinvent itself in the desperate post-war years.

All the Things We Never Said

According to this review in the Japan Times director Yuya Ishii – The Tokyo Night Sky Is Always the Densest Shade of Blue (2017), The Great Passage (2013), Mitsuko Delivers (2011), Sawako Decides (2010) – was part of a project created by the Hong Kong International Film Festival Society and China’s Heaven Pictures, which “tapped six Asian directors to make “Back to Basics” features on a meagre budget of about ¥15 million each. Taking advantage of some unexpected downtime after a scheduled shoot in South Korea was postponed, Ishii wrote a script in three days and started shooting a couple of months later.”

Synopsis: Atsuhisa, Natsumi, and Takeda have been close friends since high school. Atsuhisa and Natsumi married and have a daughter who is five years old when we enter their lives. Atsuhisa (Taiga Nakano) returns home, one day, to find that Natsumi (Yuko Oshima) is sleeping with another man. Their marriage begins to collapses and Takeda (Ryuya Wakaba) finds himself caught in the middle…

The theatrical film debut of Shunsuke Nakajima who has worked on music videos and commercials. Apparently, this work was created from the director;s experience of having a relationship with someone of the same sex when he was a junior high school student.

Synopsis:  In an alternate reality Japan, the “SP Law Article 1” requires all boys to have sex with an adult man before their first sexual experience. Main protag, Yuki has the hots for Ayako but does not want to get together with a guy. However, when she is being targeted by the playboy Yamada, he is forced to make a decision…