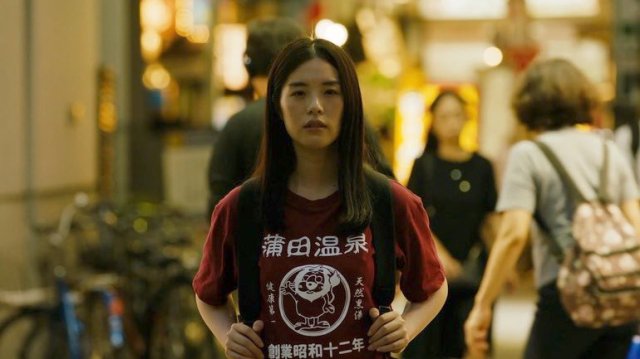 We have made it through another week.

I have been busy posting things such as a round up of the Japanese films at the Vancouver International Film Festival, the London Film Festival, Skip City D-Cinema Festival and an interview with Urara Matsubayashi and Mayu Akiyama for their work on Kamata Prelude and a post about the Kickstarter campaign for Noriko Yuasa’s latest project, Performing Kaoru’s Funeral. In terms of films watched, I have ploughed through the MOOSIC Lab works that are free to view for the remainder of this month and I have watched John Woo’s The Killer and a Japanese film from 2018, Lovers on Borders. Oh, also more episodes of The Boys season 2! 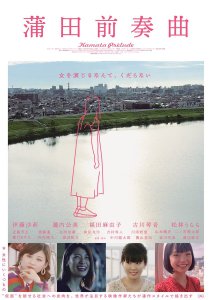 Urara Matsubayashi, the film’s producer and one of its cast, is a rising star active on the stage, TV drama, and on film. She will be most familiar with her performance in The Hungry Lion which was screened at the Rotterdam International Film Festival and New York Asian Film Festival in 2018. She is joined by many seasoned actors, including Sairi Ito (Love & Other Cults) and Kumi Takiuchi (It Feels So Good, Greatful Dead) and Ren Sudo (Last Judgement).

Here’s my review and, again, here’s my interview with producer/star Urara Matsubayashi and director Mayu Akiyama.

Synopsis: A four-part film done in the unique style of each director, Urara Matsubayashi gives a portrayal of a struggling actress named Machiko who lives in Kamata. Machiko is the central axis of the movie as the film comically depicts what it means to be a “woman” and an “actress” in society through showing the patterns of life as conducted by her and the people that surround her. 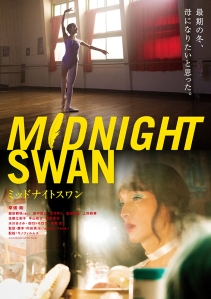 From Eiji Uchida, the director of Love and Other Cults (2017) and Greatful Dead (2014), a film that sounds a little like Close Knit (2017), the quietly affecting transgender drama from Naoko Ogigami. It stars Tsuyoshi Kusanagi, former member of SMAP in the lead role, Asami Mizukawa (A Beloved Wife) and Tomorowo Taguchi (Tetsuo: The Iron Man).

Synopsis: Nagisa (Tsuyoshi Kusanagi) started life as a guy in Hiroshima but moved to Shinjuku, Tokyo, and transitioned to a woman. Her life is changed when a distant relative named Ichika (Misaki Hattori) comes to stay with her. She has been neglected by her mother Saori (Asami Mizukawa) and has nowhere else to go but it won’t be easy for Ichika and Nagisa to get along. However, over time, a bond develops between the two as they influence each other and Nagisa discovers her maternal instincts. 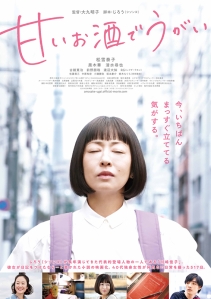 The writer of the film is Jiro. He is a member of the manzai group Sissonne and he has written a novel in the voice of a woman named “Yoshiko Kawashima”. The novel is a diary that notes her thoughts and it has been adapted for the big screen. This is Jiro’s second collaboration with Akiko (Tremble All You Want) Ohku after they worked on Marriage Hunting Beauty.

Synopsis: Yoshiko (Yasuko Matsuyuki) is a single woman in her 40s who works in a publishing company and enjoys drinking grappa and writing in her diary. She enjoys her simple life but when she is introduced to a younger guy in his 20s, she falls in love and a new, welcome complexity changes her easy days…

Keep Your Hands off Eizouken! Live-Action 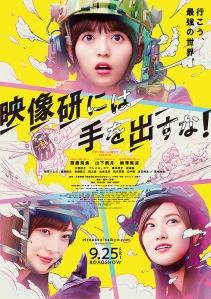 Synopsis: Midori Asakusa dreams of making an anime, but is too timid to try it herself. However, with her friend, the money-mad Sayaka Kanamori, and Tsubame Mizusaki, one of the school’s elite who secretly harbours dreams of becoming an animator, Midori set up the Eizouken (Video Research Club) to make an anime.

How Neya Ryoka Became a Director 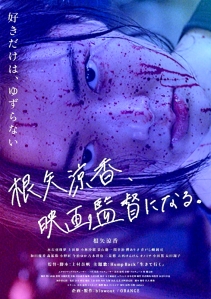 Ryoka Neya is an up-and-coming actress and I reviewed her latest film, Idol, last week Friday. She gave a riveting performance in that and she takes the lead in this film which was originally set for a release in May.

Synopsis: Ryoka Neya plays a version of herself, a person who loves movies and has a dream of becoming a director. So far, she has risen through the ranks to work as an assistant director, but has not been able to make any of her own works. She also struggles to convey her love to Keita, who she has been in love with since college. Will Ryoka be able to seize her dreams and her man? 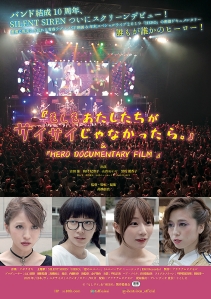 The four-member girl band Silent Siren, nicknamed “Sai Sai”, is celebrating its 10th anniversary since its formation in 2010 with this movie which asks “What if we weren’t Saisai?” This is an adaptation of an original drama of the same name which stars the members of the band. It contains footage from their concerts, such as Year-end Special Live 2019, as well as an alternate timeline story. 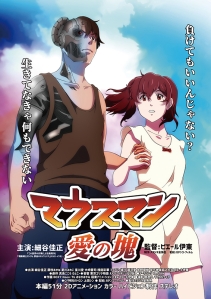 A self-produced animation made remotely, this is the movie culmination of a series of shorts (numbering 70) that director Pierre Ito has been working on between 2016 and 2018. It has been released in the year of the rodent, which is perfect.

Synopsis: 32-year-old Mikio Nezumi lives a dull life until he is suddenly transformed into a cyborg by a mysterious national institution. He is thrust into a battle with an unknown invader as the cyborg “mouseman.” He cannot leave his old life behind as he is reunited with his former lover in a battle…

ATEOTD – At the End of the Day 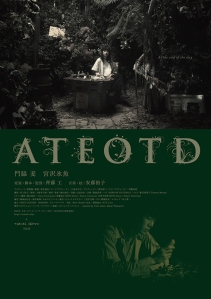 Actor/director Takumi Saitoh has been very busy both in front of and behind the camera and this short film is his latest work and it stars the super-talented actress Mugi Kadowaki (Double Life, Her Sketchbook).

Only a music video is available.

Synopsis: “ATEOTD” is an abbreviation of the phrase “At the end of the day”. It’s the title of a story set in the year 2120. Similar to our world, there is an epidemic once every 100 years, only this one seems to signal the end world as people have been forced to live in shelters. The story focuses on two people, a man and a woman, both of whom live lonely lives after losing their family to this new sickness. Only hope carries them individually but they do form a connection… 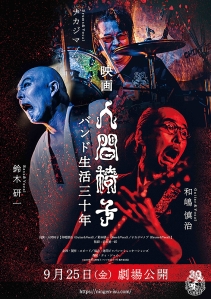 Synopsis: NINGEN ISU (which translates to “The Human Chair” Edogawa Rampo) formed in 1987 and made their major debut in 1990 with their first album “Ningen Shikkaku (No Longer Human)”. This documentary celebrate 30 years of their adventures mixing Japanese classical literature, the folk culture of their place of birth, Aomori, and various forms of rock music, the most consistent being progressive. The film shows a live performance at Nakano Sun Plaza Hall in Tokyo from their 30th anniversary tour. There are also snippets from the bands tours in Germany and the UK in 2008 and behind-the-scenes moments.

HARAJUKU Seven Days Given by an Angel 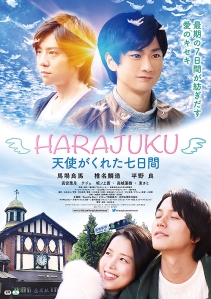 This film was shot entirely on an iPhone. 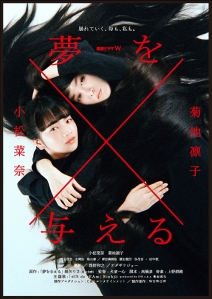 All four episodes of WOWOW’s serial drama will be screened at a cinema and divided into an A (1 and 2) and B (3 and 4) screening.

Synopsis: Mikiko (Rinko Kikuchi) had grand ambitions for her daughter Yuko to become a star and, after getting spotted at an audition, it seems it will come to pass. As a young woman, Yuko (Nana Komatsu) is popular and appears on the cover of magazines, variety shows and drama series but Yuko feels torn inside about the difference between her professional and personal feelings. When she meets and falls in love with a dancer, things start to go wrong…

The Name of that God is Jealousy

Actor Kensuke Ashihara has appeared in films for Hirokazu Kore-eda (After the Storm) and Ryutaro Ninomiya (Ojo-chan) and now he will make his directorial debut with a film he starred in, wrote and edited which is a cynical drama about a man who is jealous of a friend’s success.

Synopsis: Masuda diligently works at a real estate company and has a nice quiet life with his girlfriend Tomoko. However, there is a problem: Masuda’s friend Muto is a TV star and it seems that Tomoko likes him a lot. Furthermore, Muto is on TV a lot. Masuda is becoming jealous and this is when a suspicious man who calls himself a priest appears in front of Masuda at a point when he cannot control his jealousy.

3 thoughts on “Kamata Prelude, Midnight Swan, My Sweet Grappa Remedies, Keep Your Hands off Eizouken! Live-Action, How Neya Ryoka Became a Director, ATEOTD – At the End of the Day and Other Japanese Film Trailers”