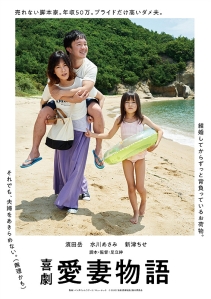 Writer/director Shin Adachi really grabbed the attention of the cinema world with his script for 100 Yen Love (2014) which charted one female loser’s rise from zero to hero via boxing. Following that he returned to writing scripts and made a number of hits but soon directed his debut film, the warmly received 1980s-set nostalgic comedy 14 That Night (2016). For his sophomore feature, A Beloved Wife, he adapted his semi-autobiographical novel and the old adage that “it is better to write what you know” turned out to be true as it won Best Screenplay at the 2019 edition of the Tokyo International Film Festival. A painfully funny and awkward comedy about marital disharmony, one hopes that this isn’t too close to reality.

The famous proverb, “Behind every great man is a great woman” applies to A Beloved Wife as it gives audiences ringside seats into a painfully funny dysfunctional marriage between a sex-obsessed writer and his long-suffering partner. 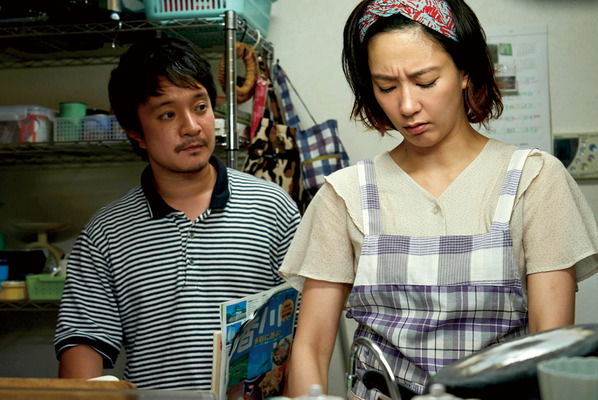 While every marriage has its peaks and troughs, for the Yanagida’s, the troughs have been longer and much deeper and it is all linked to the husband Gota Yanagida (Gaku Hamada) for he is a pompous and lazy scriptwriter running on the fumes of past successes. Suffering writer’s block, he has been living off his wife Chika (Asami Mizukawa) for the last 10 years. Contenting himself to occasionally doing cooking, cleaning and childcare and always promising to write a hit, he has forced her to her turn into the family breadwinner and so she is constantly working, constantly tired and very unhappy about their situation and has no problem loudly denouncing her husband because of it. Meanwhile, their daughter Aki (played by the adorable Chise Niitsu) is a cheerful poppet concerned mainly about having fun.

A certain unsatisfying but liveable stasis has set in for these marriage partners and it is familiar from every long term relationship as people settle for a status quo, only here it is defined by low-level sexual pestering from Gota and the increasingly regular verbal flare-ups from Chika. Big things seem to be on the horizon, however, as Gota catches a break from a film producer: he is given the task of writing a screenplay for his story of “a high school girl who makes udon noodles at a tremendous speed”. All that is required is that he travel to Kagawa Prefecture in Shikoku and tour the place and interview people. Alas, Gota has no driver’s license and will need to be chauffeured so he persuades Chika that their fortunes might be changing for the better and his work trip can also double as a family holiday. Chika reluctantly agrees but it turns out to be a holiday from hell as Gota has sex on the brain and an unerring ability to let it cloud his motivation which initiates a self-destruct timer in an ongoing meltdown from Chika who has had enough.

While the film is told from Gota’s perspective, Chika is the real hero here as she bravely battles to make a success of her husband. The film revels in showing how difficult a task this is.

Gaku Hamada, really good at playing uncomfortable characters like his veritable shut-in struggling to break free in See You Tomorrow, Everyone (2013), has the unenviable task of being sordid and pathetic and he nails the role of Gota perfectly as he slouches and sleazes his way across Shikoku without being so unlikable that he turns the audience off. For the few moments of genuine immorality and obnoxious egotism, there are some that give a glimpse of a softening trait like being unconfident and we do get a sense that he does love his wife but cannot find the motivation to do anything to better his situation and it feels like a believable helplessness that comes from being too complacent for too long and we see how Chika hates it.

It wasn’t always this way. Flashbacks to earlier times show him as more go-getting and her as a more hopeful and unabashedly enthusiastic and supportive woman but a settled domesticity snuffed out that fire and being taken advantage of by Gota has led to Chika’s frustrations with her louche and lazy other half which has warped her personality into that of a fiery harridan, as exemplified by her stream of reproval and irritation over his demands for sex which she resists at every turn. We sympathise as we get a real insight into Gota through his shockingly honest narration, which gives his personal observations and sleazy thoughts, and through his thoughtless lust-fuelled but funny misadventures which bring shame and even danger to his family.

Acting as his counterweight is Asami Mizukawa who was the ladylike love interest in Fuku-chan of Fukufuku Flats (2014). She is a real revelation here with her blunt behaviour. Having been worn down by her situation, she often gives up pretences to being ladylike and splays her body out in exhaustion, drinks hard liquor at every opportunity, and doesn’t mince words as she offers fusillades of coruscating criticism to Gota that either had my jaw on the floor over the verbal devastation or a grin on my face that I was never quite certain if it was due to a feeling of horror or hilarity.

This fearlessness in bucking any and all attempts at social etiquette and stereotypes of how Japanese women present themselves provides fuel to the comedy fire as she publicly dominates and demeans her husband, who we have very little sympathy for as we understand what a lazy slimeball he is, and she comes off as a hero as she does her best to push him to be a better writer and family man. The film hits harder in realistic details such as how hard a writer’s life is and where the two squabble over the cost of living and we see how Chika budgets, from showing a gruelling trip by local train from Tokyo all the way down to Takamatsu, and life living in cheap hotel rooms. It is easy to be both horrified and made to double-over with laughter at her behaviour but ultimately we sympathise with her. Also, points for showing how both sides of the couple navigate sex realistically, especially in a family situation.

While the sound of an arguing couple might be a turn-off, far from being hellish company, the two are consistently funny as they contend with each other. What keeps this relationship from tipping over into an essay about abuse is that affection still exists between them as they soften at times so the verbal and physical jabs they give each other are sometimes playful and perfect for a blackly comic take on modern marriage. The pairing of the lead actors is priceless as Mizukawa’s loudness and physical size and her fesityness overwhelm Hamada. While sex and nudity are shown and some perversion is shown, it is really unerotic and often played for laughs, especially the moments when Gota feebly struts around, his manhood out, and Chika banishes him. There is the sense that these two are equals and can work out things which leads to a painful/hopeful ending where tears and laughter emerge as they declare how frustrated they are. Once they begin to communicate again, hopefully they can move forward together.

This was a long review but A Beloved Wife was a really fun film with fantastic performances and witty writing and I highly recommend it!