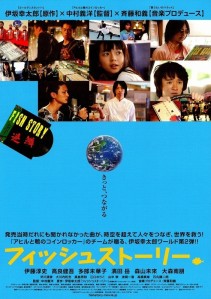 If I were to tell you just some of the many different things going on in Fish Story, you would say that the title must be a perfect fit for such an outrageous yarn and that it cannot possibly work in a movie. But the film’s story gracefully ties a huge range of things together to make an unconventional and warmhearted tale that shows how no struggle is fruitless and everything in life can go on to have great meaning.

Fish Story is based on Kotaro Isaka’s same-named novel and consists of many distinctly different and seemingly unconnected storylines taking place at different points over 77 years to explain how a punk rock song nobody bought saves the world from an asteroid on a collision course with the Earth.

Everything starts in 2012 with said asteroid just hours away from causing an extinction level event. While many people have fled to Mount Fuji, a record shop owner (Nao Omori) in Tokyo plays an obscure song titled “Fish Story” for a customer and explains how it is fated to save the world from disaster. We then flashback to 1982 where timid college student Masashi (Gaku Hamada) is acting as a chauffeur on a group date and finds his destiny altered by a psychic and a collection of reputedly haunted cassette tapes, one of which has the song “Fish Story”, just before he encounters a dangerous situation that requires him to be brave. In 2009 a teenager named Asami (Mikako Tabe) is on a school field trip on a ferry and falls asleep just before the boat is taken over by terrorists. When all seems lost, enter a hero, a chef (Mirai Moriyama) with a sideline in martial arts and a desire to be a hero of justice. Then it is 1975 and the story of how cutting-edge punk band Gekirin are on the brink of breaking up but make one last desperate cry of creativity with their final record, “Fish Story”. 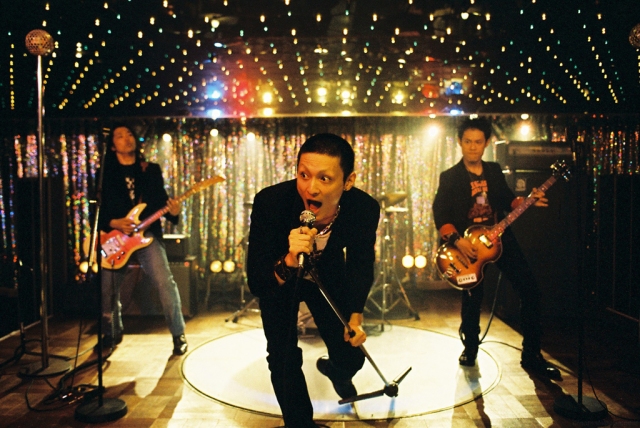 While each of the storylines are unified in examining the same themes of a person’s struggle to find acceptance and having the power to step up to the plate at a time of crisis, they all take on the trappings of a different genre and are shot with a careful balance between the parodic with the dramatic as the film takes the plight of its characters seriously but is also aware enough of any absurdity to slip into humour – from the opening disaster movie reminiscent of Armageddon (1998) to the not so macho Under Siege (1992) parody with a pastry chef (trained via a Karate Kid (1984) montage) battling seaborne terrorists.

As complicated as unifying all of these different story strands sounds, the film flows smoothly thanks to using a structure of nested flashbacks that build suspense and show how every part is an interlocking piece of a puzzle. While alert audiences will be able to easily guess certain things, the final sequence is guaranteed to make viewers feel giddy with glee as we see how the threads of fate connect people and how what appears to be a random thing in life can play a big part later on.

This is not the first film with a complicated structure that director Yoshihiro Nakamura has worked on with scriptwriter Tamio Hayashi as the two had previously adapted Kotaro Isaka’s novel The Foreign Duck, the Native Duck and God in a Coin Locker two years earlier and would go on to do a superlative job with The Snow White Murder Case (2014), but this is arguably the most diverse in terms of tone and each section has a distinct feel with the 1980s replete with cassette tapes, checkered shirts and skirts and pastel colours as well as a sense of a summer where someone comes of age and the 1970s have grungy cigarette tinged visuals and grimy locations. These details make up for a lack of visual flair but the real perfection comes in how every cut feels like it is almost the perfect length to really explore these characters.

This film presents a good chance to get to see some early roles of big actors like Kengo Kora (The Story of Yonosuke) and Gaku Hamada (See You Tomorrow, Everyone – also directed by Nakamura) and Mirai Moriyama (The Drudgery Train). The latter two bring an impressive physicality to their role as Moriyama, a also a trained dancer, balletically deals with terrorists while Hamada externalises his internal struggle to stand up for himself. Meanwhile, the music was playednlive by the band Gekirin, made up of the actors Atsushi Ito (Shigeki on bass), Kiyohiko Shibukawa (Tetsuya on drums), Kengo Kora (Goro on vocals) and real life rocker Toshimitsu Okawauchi (on lead guitar). The guys practised for two and a half months together to nail the songs and they bring a fierce performance on stage perfect for their storyline of a band, unheralded in their time, leaving one last song that showed their true value, something which fits in perfectly with a story where every effort has meaning even if it isn’t immediately obvious.

This is the sort of film that may have varied storylines and styles but works because of earnest portrayals of the characters and its tone, all of which is full of a refreshingly naive hopefulness and quirky sense of humour. It is the type of film that can offer viewers encouragement in their lives because, through likeable characters and relatable stories, it relays the idea that everything in life has value. As the stories converge and the links emerge, it is hard not to get a little teary eyed and feel inspired over seeing how the efforts of everyone over the years come together to save the world.

Third Window Films have release the world’s first ever blu-ray edition of FISH STORY to mark 10 years since Third Window Films first released the film on DVD and the extra features on the disc makes a physical purchase absolutely necessary.

After watching the film, it was fun to get to know more about how it was made and what happened afterwards. Seeing director Yoshihiro Nakamura and his cast talk about their conception of the characters is an interesting insight into some of the key relationships and some interesting pairings in the movie and it was genuinely moving to see how the boys in Gekirin came together as a band through rehearsals and even went on to play concerts and release a CD. It is quite moving to see the actors express their emotions over their efforts and what time spent working on the film meant to them, plus we get to hear the music again and again.

It has a 15 certificate and has an RRP. of £19.99. As well as this release, it is also on DVD, though and video on demand platforms, but the higher image quality definitely makes the blu-ray an essential addition to the collection.