I hope you are all safe and well!

The state of emergency has been lifted in Osaka, Kyoto and Hyogo this week but it remains in place in Kanagawa and Tokyo. Movie distributors and cinemas have taken a massive hit in April due to the closure of cinemas with “the total box office earnings of Japan’s 12 largest movie distributors in April totalling just $6.4 million (688.24 million yen), a 96.3 percent plummet from the same period last year, according to the Motion Picture Producers Association of Japan (MPPAJ)” (source). As I wrote last week, some cinemas have reopened and the films that are being screened are classics. The number of classics has been updated to include Blade Runner, Rio Bravo, Ben Hur and The Shawshank Redemption. What about new films?

Well, this week, I posted a review for the indie drama The Modern Lovers and the interview I did with the director Atsuro Shimoyashiro. 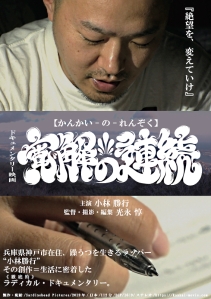 This was originally scheduled to play at a cinema in Kobe from May 23rd but it has shifted online for a two-week screening period.

Synopsis: A documentary about the life of Katsuyuki Kobayashi, a rapper from Kobe deals with manic depression. The film follows him during the lead up to the release of his second album “Kattsun”, and the time when he was admitted to the isolation ward and how he cared for a disabled person.