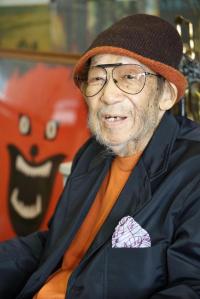 It has been a while. I hope you are all okay!

Yesterday we lost the legend that is Nobuhiko Obayashi. He died at the age of 82, almost four years when he was given just four months to live after being diagnosed with cancer. Even though I wrote reviews for just two films (Hausu  back in 2011 and Hanagatami in 2018), it feels like I wrote about him every year because his films were constantly in circulation. I was even inspired to visit Onomichi in 2018 and photograph some locations he filmed in. Anyway, he was feted around the world and worked to the very end, as evidenced by the large amount of films by him or connected to him at last year’s Tokyo International Film Festival.

It feels like the Japanese movie industry is in a gentle decline as adaptations, compilations, TV movies and mediocrities dominate due to production committees who hoover up profits while the artists making content are underpaid and have their creativity stifled. With Obayashi’s passing, the industry has lost some of its magic. He was imaginative and had a creative streak and boyish enthusiasm that made his films charming. We’ll not see an artist like him again so we should treasure the works he created, many of which will continue to be screened.

Anyway, I was in Japan for a month and I returned to the UK almost a fortnight ago after working at the Osaka Asian Film Festival. I’ve been publishing reviews and interviews I did while there and since returning to the UK, I’ve been in self-quarantine to make sure I don’t have Coronavirus so I’m kind of in the perfect position to keep writing even though the world is in the grip of a medical disaster (prompted by unfettered capitalism and poor governance mostly instituted by governments run by right-wingers).

Anyway, due to being busy, I missed all of March from the trailer posts. Due to Coronavirus, films are being pulled from Japanese cinemas, I can play catch-up.

What is released this weekend and what was released on the first weekend of March?

What was released on April 10th

Kyoto is a city famous for history, culture and a university that has an active student body. A TV drama was made about students seeking to protect the atmosphere at thee uni starring Riko Narumi (Shindo) and Ren Sudo (Saigo no Shinpan). This is the movie version.

Synopsis: Konoeryo is a university dormitory in Kyoto which has a long history attached to it. So long, that it’s probably time to tear it down and build something neew. However, some students want to keep the building intact and so a conflict occurs but the emergence of a beautiful woman could solve the issue…  How? I don’t know, I haven’t watched the drama.

What was released on March 06th and 07th?

A Life Turned Upside Down: My Dad’s an Alcoholic 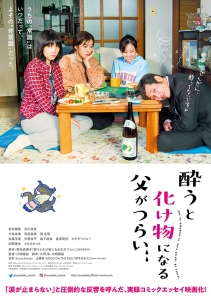 Synopsis: Adapted from a comic essay by Mariko Kikuchi who turned her hellish life into a story about a girl named Saki (Hoka Matsumoto) whose father (Kiyohiko Shibukawa) is an alcoholic and whose mother is a follower of a new religion. Saki hate’s her father’s behaviour when he is drunk and loutish. The support of her sister and best friend, and the ability to turn her life into a comic gets Saki through the collapse of her family.

Synopsis: This is the first movie starring the Matsuri Nine boys who are pop idols in their high school. News emerges that there will be a meteorite about to hit the Earth just as one of their members has an accident before a live concert but a magic lamp could be a game-changer…

Synopsis: A movie version of the TV show set in the 1980s where a teacher (Hayato Ichihara) who loves the school lunch can’t tolerate a student who brings lunch from home.

Stardust Over the Town

Synopsis: “Osamu Yamada and Hello Nights” are a long-running band of crooners who sing hits from the 60s and 70s. They haven’t been a hit themselves and so  they have been barely surviving, making tours in provincial areas. One day the band is invited to perform in the small town where their leader Osamu was born. Some of his family aren’t too happy at his return and the boys are in need of someone to spice up their act which is what barmaid Ai (Non) could do, but that might be a problem because, while she can sing, one member of Hello Nights may be her father… 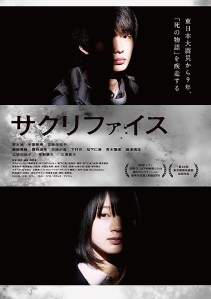 This is Taku Tsuboi’s directorial debut. He has a background in working with Makoto Shinozaki (Sharing) and Kiyoshi Kurosawa (Journey to the Shore). It played at last year’s Tokyo International Film Festival.

Synopsis: Told primarily in flashbacks, the film follows Midori, a college student who once belonged to a cult named Shio no kai. She predicted the Great East Japan Earthquake while she was a member but has shaken off her past and is now a college student. When disturbing incidents such as cat killings occur near the college she attends, it draws others in, including other former cultists. One other college student, Toko, suspects that the cat killer is her schoolmate Okita.

Synopsis: Based on reality, when a magnitude 9.0 earthquake strikes the Tohoku region of Japan on March 11, 2011, it triggers a giant tsunami which hits the Fukushima Daiichi Nuclear Power Plant. The workers struggle to control the situation with the manager Masao Yoshida (Ken Watanabe) doing his best to communicate between the 50 workers on the ground, thee company, the Japanese government and thee military. Can they prevent a devastating nuclear disaster?

Synopsis: Shugo Hayami (Kentaro Sakaguchi) and Hitomi Kawasaki (Mei Nagano) are working the night shift at a hospital which was formerly a psychiatric institute. When a masked man takes over the facility, Hitmoi is shot. The intruder tells Shugo to treat her as they are now some of the 64 people he has taken hostage in the hospital. The two doctors decide to try to escape but encounter strange cases.

Synopsis: Jun Hori is a journalist who takes on various issues around the world in this film such as the Hong Kong protests, a family split apart by the conflict in Syria, the Fukushima meltdown and opposition to the US base in Henoko.

Synopsis: A documentary that captures the activities of the dance troupe “Sokerissa!” (which comes from the Japanese, “sore ike!” “Step forward!”) who are led by the choreographer Yuki Aoki who works with the homeless living on Tokyo’s streets. The group are accepting of others, regardless of how they came to be on the street, and they see dancing as a point of contact with the rest of society. While the dancers may have lost material things and families, they still own their bodies with which they take part in pure physical expression. You can find out more about the group’s activity here and the documenary.

Synopsis: Mita (Amane Okayama) is a young man who had hoped to escape his boring town and become a successful videographer in Tokyo but his dreams didn’t materialise and he is forced to return. He’s now working for the town council in the tourism department and is tasked with attracting tourists. He is given just two weeks. Mita decides to make a video of his town but with no tourist attractions or areas of interest, it’s a tough task. He does have one great resource: the people of the town whom he ropes in to dance. A former idol could be a secret weapon that brings everything together. Director Toshimitsu Iizuka reunites with Poetry Angel cast members Amane Okayama and Rena Takeda to tell this story.