This is my first trailer post in a month and it’s because I am back in the UK after my month-long holiday in Japan.

While I was over there I worked at one film festival, the Osaka Asian Film Festival (as can be seen from my reviews), and I attended another in the place I used to live, Asagaya. I stayed in Osaka and Tokyo with friends, eating and drinking whilst the rest of the world was undergoing Coronavirus shock and social distancing. I was ever aware of the dangers and so I was prepared when I had to cut my time in Japan short by nine days due to British Foreign Office advice recommending people return home before too many countries closing their borders and airlines cancelling routes. I managed to get back home due to the help of two very special women who provided support at a critical time. I owe them a lot. I will continue to do my best for them and for everyone else.

What is released this weekend? Fewer films than we’ve seen in a while, probably due to Coronavirus.

This is a classic. Like Ridley Scott’s movies Alien and Blade Runner, its aesthetics have influenced the look of a lot of animation and film and now it gets a 4K remaster which will play on 36 Japanese IMAX screens.

Synopsis: The year is 2019 and thirty-one years have passed since World War III. Neo-Tokyo is wracked with riots and clashes between the authorities and extreme political opponents. A child from a top secret government project interested in psychic powers is spirited away by one of these political extremist groups but gets caught up in a clash between young delinquent motorcycle gangs. This gang finds itself suddenly catching the interest of the authorities when one of the gang-members, Tetsuo, exhibits psychic powers. He is taken by the army to be experimented on but his mind might be more powerful than anybody could have guessed.

Synopsis: A film that depicts the days of a new care worker named Kei (Junki Tozuka) who joins the staff of a large nursing home where the rules  prioritise efficiency and risk management. He questions these rules, especially when a woman named Miyoko comes in with a case of dementia. Her husband, Tatsuro, who had been caring for his wife at home, does not trust the facility and scrutinises Kei who soon falls foul of his bosses… 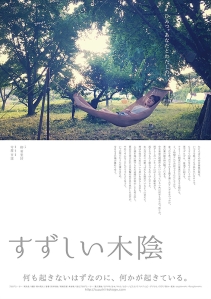 Synopsis: Fumio Moriya, a writer and actor who made his debut as a director with the 2017 film Manga Jima, makes another feature film with the seemingly simple concept of showing a girl sleeping in a hammock in the shade of some trees.  The audience finds out what’s going on. The sleeping girl is played by Eri Yanagi who appeared in Manga Jima, as well as a collection of other good indie films like A Gentle Breeze in the Village, Rolling and Ping Pang.