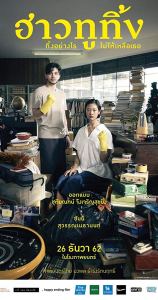 Perched perfectly between satire and drama, Happy Old Year sees writer/director Nawapol Thamrongrattanarit test the limits of ruthlessness needed to conduct the Marie Kondo minimalist lifestyle with a main character who is wholly unlikeable and yet, by the end, quite sympathetic.

It is almost December and Jean (Chutimon Chuengcharoensukying) returns home to Thailand after staying for four years in Sweden. This 20-something has a mission: to net herself a job. To do that, she must live a minimalist lifestyle and convert the family home she shares with her mother and brother into a home office before January. The look she wants to capture is all bare white walls and spartan furnishings as shown in lifestyle magazines she takes photos of. The reality she has to battle is that her home used to be a music studio that her father ran before he left so there is a family’s lifetime worth of objects to remove.

It’s all fun and games at first as the camera floats through the home while Jean blithely trashes old jewellery, clothes and cassette tapes, school reports, and other things superseded by new tech or consigned to the dustbin of history. Seeing these items is like getting a glimpse of a life, the mixtapes made for lovers, the photographs stored on rewritable CDs, the holiday knick-knacks that bring back happier memories. Audience members will have their own memories of stuff like this.

But there’s no time to get soft!

Jean’s work ethic borders on zealotry for the cult of Kondo as she spouts aphorisms to inspire others and has an “ends justify the means” attitude that sees her bulldoze all opposition. The film is split into chapters with intertitles flashing up like in a Marie Kondo guide in a parodic fashion. During these sequences she becomes rather unlikeable as we see flashes of selfishness and insensitivity in her drive to get things done by ignoring the protestations and feelings of others. Then come the substantial things like the piano her father used to play, the camera her ex-boyfriend gave her to take to Sweden. For these items, she has to get back in contact with the original owner and return them and this is the real challenge for the mini-Marie Kondo as she has to confront what they mean to her and the influence the owner had over her.

Without missing a beat, the film moves into heartfelt dramatic territory as the breezy steadicam sequences slow down to become more thoughtful static shots, observant close-ups that looks at the emotions flashing over Jean’s face or the faces of others as they rake over shared history held by an item and we discover that the characteristics motivating her now have always been a part of her, have hurt others and are rooted in a childhood trauma that saw her treated with a callous disregard that equals the way she treats inanimate objects she has just been junking. It’s a genius turn of events that makes an unsympathetic character rather pitiable so that emotional stab at the end should get the audience to tear up a little.

“More emo, more problems”, Jean says as emotional outbursts and apologies take place and the parodic titles become ironic as the emotions run higher and higher. The film earns this change in tempo and makes it work because Chutimon Chuengcharoensukying’s central performance is so sweeping we are taken along while the direction places us in the home, amidst the characters, experiencing the shots of nostalgia and hurt that the simplest of things can contain and, on some level, everyone in the audience will understand the difficulty in de-cluttering, that not every item can be trashed so easily because imbued in them is a human connection which the film expertly explores.