The Temple of Wild Geese 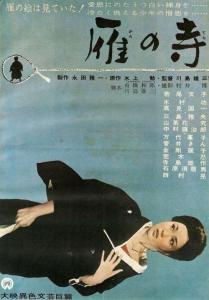 One of the chief ironies of life is that those who profess to be the most morally upstanding often end up being the most immoral. With this in mind, director Yuzo Kawashima, chief satirist of post-war Japan, finds great material to work with when it comes to those in the religious orders. However, instead of laughs it is all menace as dark passions surge out of control. His film’s dark material finds its match with its aesthetic, a charcoal-like texture and look and foreboding music which make this a chilling film as we venture into the moral hypocrisy of the inhabitants in a Buddhist temple, all of which affects one boy’s warped mentality.