I managed to make it through the week with very little sleep and worked on film stuff as well as doing my regular job. I’ve reviewed Her Sketchbook and The Actor for VCinema and then posted the reviews on my blog. 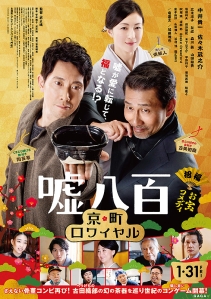 Synopsis: Our antique forging boys Norio Koike (Kiichi Nakai) and Sasuke Noda (Kuranosuke Sasaki) are dragged into a scheme centered on Kyoto and Sakai in Japan’s Kansai region when they get involved in replicating the tea ceremony master Shigenari Furuta’s chaki (containers used in tea ceremony) at the behest of a mysterious woman named Shino (Ryoko Hirosue).

Synopsis: In 2030, Artificial Intelligence dominates peoples lives and the most trusted AI is the NOZOMI system. When it begins to run amok, tech engineer and creator Kosuke Kiryu (Takao Osawa) must stop the system from selecting and killing people it deems medically unfit. 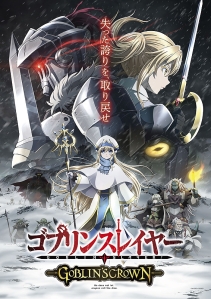 Synopsis: A spin-off from the TV anime in which an adventurer who specialises in killing goblins in a fantasy world enters a mountain range to rescue a missing adventurer.

Synopsis: This is based on a true story from 2003 in which volunteers inside Maeda Corporation created the Fantasy Sales Department as a public relations project, intended to drum up interest in the construction industry. They used anime and examined just how much it would cost to construct the gigantic buildings that appear in animations like Gundam and Mazinger Z. They  then published their findings on the web and that attracted media attention and this film was made… 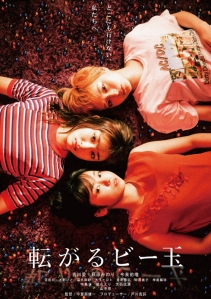 Synopsis: Shibuya is the fashion and youth district of Tokyo and there is major redevelopment is in progress. Three girls who live in an old house in a corner of Shibuya, Ai, Mizuho and Erika, spend their days worrying, struggling, laughing and crying while pursuing their dreams. One day, a notice of eviction is sent to their house because it will be demolished…. What they obtain is not a dazzling “jewel” or something, but a missing “marble” from somewhere. 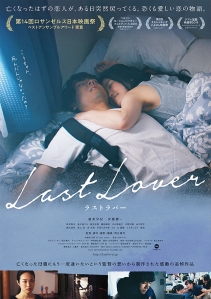 Synopsis: Koki usually sleeps next to Miyu but, one morning, he leaves early. Miyu is surprised and thinks it is a joke but then she hears news that Koki died while asleep behind the wheel of his car. Since then weird things started to happen around Miyu including a co-worker getting killed by someone. Believing these cases were related, Miyu talks about it with her co-worker, Konishi. Unlike Koki, Konishi is a hardworking and friendly man. Miyu starts to develop feelings for Konishi  but then, one day, Koki comes back as a ghost and makes things difficult for Miyu…

Watch out for Patriots! Kunio Suzuki

Synopsis: A documentary about the right-wing political activist, Kunio Suzuki (more info here). Masao Adachi, a movie director closely related to the Red Army, is one person interviewed about the man. 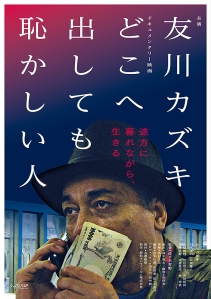 Synopsis: A documentary that follows Kazuki Tomokawa, a cult artist and singer, painter, and poet, who has been crazy about horse racing. He made his record debut in 1974, and later began his career as a painter, holding his first solo exhibition in 1985. His various activities have attracted many artists and cultural figures such as writer Kenji Nakagami and film director Nagisa Oshima, but he was not widely accepted by the public, and he still lives quietly in a small apartment in Kawasaki.

Synopsis: A music documentary about “FRIDAY”,  a 40-year-old music venue in Yokohama. Located on the 3rd floor of a multi-tenant building, it has just 50 seats and the Crazy Ken Band who are just one of a number of groups that take to the stage.

Cinema Rosa in Ikebukuro continues to support indie directors with late-night slots purely for their films. Ryo Katayama gets a go this week. 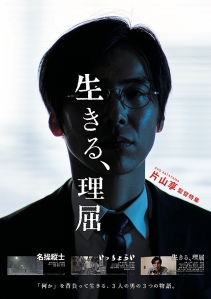 Synopsis: The story follows a man named Shibata who works for a real estate agent. He refuses to help others based on principle but when he is in need of help he finds the situation impossible and begins to examine his life…

Synopsis: The director shot a short film set in his hometown in Fukui Prefecture in 2018 and the story concerns Tetsuya, a man who runs a Chinese restaurant in a shopping district in front of Fukui Station. Things are going badly in his personal and professional life and he meets his ex-girlfriend who is now married to the son of the shopping district chairman after they had an affair…

Synopsis: This is a short film from 2018 where a couple’s relationship dynamics play out over the cleaning of a toilet…