We are closer to Christmas.

This week I reviewed two Sion Sono movies, Tag and Virgin Psychics, both from 2016 and while the former is more meaningful than the latter, both are worth watching.

Get past what we all know is inevitable and let’s make a start dealing with this stuff and making a change for the better in society.

Japan and Korea don’t always have the best diplomatic relations but the recent Winter Olympics and a whole bunch of films see creatives and sportspeople unite. This film sees the two nations work together thanks to music as friendship sprouts between Korean directors and Japanese actors.

The original title when I saw it at the festival was あなたの宇宙は大丈夫ですか (Anata no uchuu wa daijoubudesuka) which is something like Is Your Universe Okay? The new title is now Ferris Wheel.

Shot in many neighbourhoods in Osaka and featuring Japanese and Korean artists such as Lucid Fall, Soul Cry, Kandu, Lee Jong-on, and Hero-Sway, the film looks to have a lively and lovely soundtrack and pleasant characters who are a joy to be around. This is an excellent example of how a film and a festival can unite two countries.

Synopsis: When his boss Dae-jung goes missing in a ship accident, the company sends Woo-jyu to Osaka to finish his business. On his last day in the city, Woo-ju chases someone who looks exactly like Dae-jung to Taisho, an area in Osaka. He ends up losing him, but the sound of a guitar draws Woo-jyu to a small bar, Pier 34. Its owner, Snou, somehow reminds him of Dae-jung, and listening to his music brings back memories. After passing out right there, Woo-jyu ends up missing his flight back to Korea. He quits his job on a whim and soon meets Haruna, who is learning how to play the guitar from Snou. Woo-jyu decides to stay at Pier 34 until he finds Dae-jung and so begins an unlikely vacation for him.

Bunbuku director Nanako Hirose follows her critically-acclaimed feature His Lost Name with a documentary on books! It was at the Busan International Film Festival. 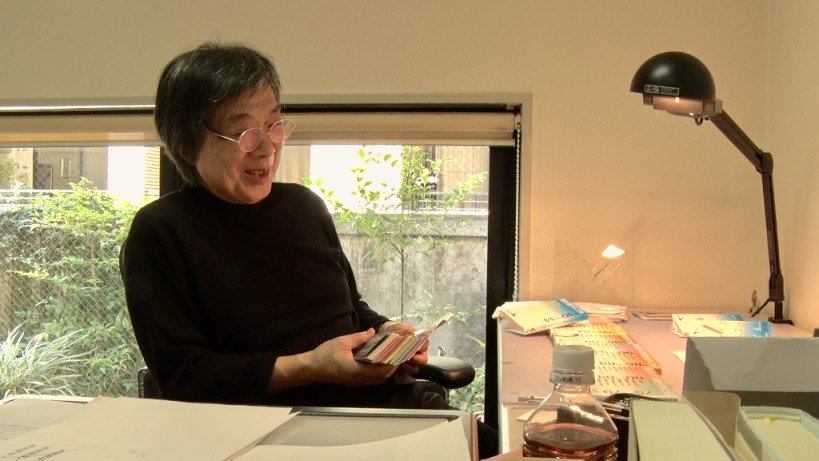 Synopsis: Nanako Hirose spent three years (2015-18) following a world leading book designer named Nobuyoshi Kikuchi. He has been active for more than 40 years and has worked on more than 15,000 books. By following Kikuchi and the way he designs books by touching and understanding physical materials, the film looks at the manufacture and status of paper books in the digital age.

Synopsis: It is almost time for the summer holiday but the entire male student body of one class from a junior high school disappear early as they put into action a rebellion against adults. With the help of female students, they launch operations from their base in an abandoned factory in a protest against adults and their hypocrisy and corruption and their actions thrill society even as they cause chaos for the iniquitous status quo.

This one was also at Busan.

Synopsis: It is the era of the silent movies and benshi (narrators who appear live in the cinema) are in demand. Shuntaro lives in a small town and he has had dreams of becoming a benshi ever since he was a child and his dreams are about to come true just as (it gets better) he is also reunited with his first love. He is, however, tasked with pleasing tough crowds as well as doing the chores and he also gets involved in a police case where they are tracking thieves and political activists…

Synopsis: University student Yuzuru Hamura is a fan of mystery novels and a member of a mystery club led by Kyosuke Akechi. They get a real mystery to investigate when fellow student and real detective Hiruko Kenzaki joins and all three head to a summer camp called Shijinso pension, which is nestled deep in the mountains, and a murder takes place.

Apparently, according to the trailer, this is Asami’s last film! Big shock since she has been a part of many genre films but she goes out with an action film designed to show off her skills.

Synopsis: Saki is not your normal 28-year-old since she is a professional thief but one crime in her past led to a death and she was punished. Since then, she has struggled to rejoin society due to her past. Saki meets a 10-year-old girl named Mari who she catches shoplifting. The older woman befriends the girl and Saki learns that Mari has been abandoned by her mother. As they grow closer together, Saki’s past catches up with her…

Yokai Watch Jam the Movie: Yo-Kai Academy Y – Can a Cat be a Hero?

Synopsis: Jinpei Jiba is a member of Y Academy’s ‘YSP Club’ where he and his friends investigate the many mysteries surrounding their school. One of the ways they do that is by transforming into ‘Yokai Heroes’. The mysteries they have to unravel range from the menacing all-powerful student council to an alien invasion…

Synopsis: Kei Shichiri of “Once Upon a Dream” fame has made a short film produced as part of a series of works set in Yokohama where a young lady discovers more about her hometown and some of the people in it as she tracks down a lost tie.

Synopsis: Kurumi is a high schooler who doesn’t have a father. She finds a Harley bike left behind by her late father and, with friends and people recruited by SNS, she tries to repair it.

Synopsis: This documentary shows the production of In This Corner (and Other Corners) of the World, the extended version of the 2016 anime film. It features director Katabuchi as he does research for the film and also the addition of new scenes involving seiyuu like Kana Hanazawa and original lead actress, Non.

Synopsis: A documentary of Naotaro Moriyama’s 2018-19 concert tour which saw him do 51 performances.