When did anime compilation films become a thing and which greedy capitalist initiated it? Most months of the year feature a spin-off or a sequel to a TV anime, all of which are fine, but the compilation seems like the most cynical cash-grab since it is often only the most salient parts of a TV show blown up on the big screen, something that could only satisfy a pre-existing audience who have watched the entire story and will have a high level of familiarity with the characters and what is going on in the narrative and bring all of that linking material to a truncated story. This film is a great example of everything wrong with compilation films and then some.

Eureka Seven Hi-Evolution is the first of three movies that serve as a reboot for the Eureka Seven mecha anime which ran for 50 episodes on TV from 2005 to 2006. It takes footage from the first 10 episodes and adds a brand new beginning and end while the remixing footage from the TV anime for the middle section – you’ll notice which parts were made for the cinema and for TV with the change in aspect ratio.

The early part of the film (and the most spectacular since it is newly animated for the cinema) covers the final stages of “The Summer of Love”, a giant battle between humanity and aliens known as “Scub Coral” over the fate of the earth. Chaos and explosions shower the screen before the space opera is over, the aspect ratio changes, and the TV anime is dived into as the early years of Renton, a boy who lost his father during the event, are shown including first encounters with a mecha named Nirvash and the pilot, a girl named Eureka.

This, the remixed part, takes all of the key plot twists and character development for characters, cutting them up into smaller scenes and showing them rather randomly with only on-screen text used to inform the audience how many years, months, days, hours they have jumped in the life of Renton as the film retells the TV anime in a non-linear order. A sequence rarely lasts for than five minutes before inter-titles (Playback, Play Forward) burst on to the screen and disrupt any and all coherence and the audience is left to piece things together before having the narrative rug pulled out from under them again as the film hops back and forth along the timeline.

This may work for hardcore fans but with little of the background of the world delivered in any form of exposition, people who aren’t fans may be left confused and unsatisfied as there is no way to enter the story and all emotional connections that build solid character arcs are left flailing due to the way the timeline of the story is dealt with in such a non-linear manner. I found the process bemusing. The initial fight was exhilarating with all of the information and mecha flying across the screen tricking me into believing it was all important while the final scene had so much charming shounen spunk (after some grisly off-screen deaths) that I could imagine hardcore fans being bowled over and made hype for more of Renton’s journey in the final two movies. The rest in the middle is messy and meant I didn’t really care all that much.

Both this movie and the TV anime were created by the animation studio Bones, a studio known for really strong world building and sharp use of contemporary counter-culture to make genre defining shows. They are the team responsible for anime like Wolf’s Rain and My Hero Academia and one of their best titles is Eureka Seven. The quality of the TV anime is present in the character/mecha designs and the glimpses of the world we see on the screen, all of which holds up over a decade after they were first created. The movie footage is spectacular with its broad and breathless approach to framing battles and landscapes. A switch in aspect ratio signals changes to the old and new footage but all of it looks good. It’s a shame that the story is lost.

This is one strictly for fans. It sets up the next two films which significantly alter certain characters and events and I have been informed the second one is much easier to get into. When it comes to this one, it might be too disorientating and you would be better off watching the TV anime first for context. 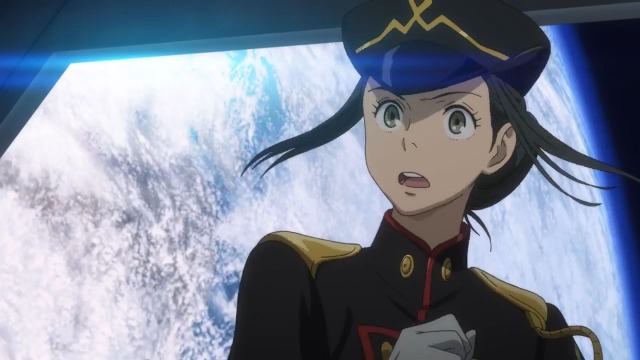