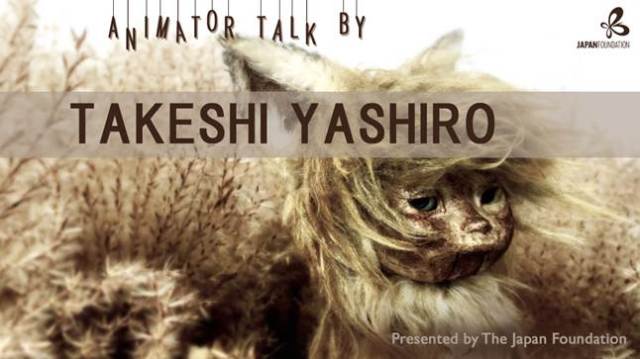 Cardiff’s Kotatsu Japanese Animation Festival and the Japan Foundation have teamed up to host award-winning stop-motion animator Takeshi Yashiro and his producer Satoshi Akutsu on a tour of the UK as they take part in talks and a stop-motion animation workshop.

On October 05th, the two men will show their latest collaboration, Gon, The Little Fox (2019) at a Masterclass and will talk about their careers as Yashiro explains why he chooses to work in stop-motion and how he makes his movies. Satoshi Akutsu presents an equally interesting talk considering he has extensive experience in the role of producer for a variety of projects in Japan and America, having worked with Japanese broadcaster NHK, animation production house Madhouse, and DVD distributor Geneon Universal.

Here’s a trailer for their latest work Gon, The Little Fox, an adaptation of the classic 1932 children’s story about the fateful encounter between a farmer and a mischievous fox.

On October 06th, Yashiro will lead a stop-motion workshop where attendees can animate their own scene with actual puppets used by Yashiro in the film. It is open to people from the age 8 and up at the cost of £27 (for booking please contact the festival info@kotatsufestival.com).

Following their stint in Cardiff, the two men will be in London for a special talk.

Takeshi Yashiro is a graduate from Tokyo University of the Arts who got his career started making CMs and studied different stop-motion techniques in his spare time until he decided to go full-time with the style in 2012 with his debut Dear November Boy (2012). He’s had a string of award-winning films like Norman the Snowman The Northern Light and Firewood, Kanta & Grandpa (both 2013) and Moon of a Sleepless Night (2015), which won the Japan Competition Best Short Award at the Short Shorts Film Festival 2016 (source).

Commenting on the win, Yashiro said about stop-motion,

“The best thing about using stop motion animation is that the characters and the set really “exist” in front of the camera. Though technology has enabled CG to create brilliant images these days, it is still worthwhile using stop motion pictures because the audience can feel everything being there and sense the texture of the materials. In this sense, stop motion films are developed from art design. While sculptors interpret the world by capturing single moments of objects, I like to animate figures to show my interpretation of the world. I hope you will enjoy the story and I’d be glad if you could spare a few moments to think about the art design in the film.”

Here are the events and dates: