If you travel to Kyoto then it is recommended you try travelling from scenic Arashiyama to the bustling city centre by the Randen trams. They cut through many areas and they prove to be the perfect setting for three intersecting stories in a film.

Quite unlike many other films screened in 2019, Randen revels in creating a

magical atmosphere of heightened romance and folktales that could only take place in Kyoto. It was the opening film of the 2019 edition of the Osaka Asian Film Festival and it will play on the final day of Japan Cuts 2019 in New York. I had the chance to interview the director of the film, Takuji Suzuki, at Osaka and he revealed how the film was a put together with love and care by his team which included Kyoto University film students and local people living along the Randen line.

Jason: How did you join the project?

Suzuki: One of the film’s producers, [Nobuyoshi] Nishida-san, brought it up first. He lives near the randen station Omuro Ninnnaji. There is Goju-no tou (a five-storied pagoda) in the area. He asked me to make a film about randen in the style of a love story. I wasn’t living in Kyoto at that time but he might have heard that I teach in the city.

J: Crowdfunding was involved. Could you talk about that?

S: First, I became an associate professor at a university and was making commercial films as a university project with a team called “Kitashirakawa-ha”. This enabled me to use some of the budget from the university project for the making of this film. I then thought I could raise money through crowdfunding and also use crowdfunding as an advertising tool to bring people together while shooting the film in Kyoto. For example, I needed lots of extras for passengers on the trams.

J: So, it was deliberate tool to help make this a “community film”?

S: In terms of that, I think that the best way of producing film is to make the people from the community who are involved discover pleasure from taking part in it and give them something to take back home, so they are not just being used as a tool. I do not consider film-making as a business. This is my fundamental ideology for making films. However, since this film was not made with my own money, I also have responsibility as a producer to recoup the money I had spent on it.

J: There are various scenes where people from the community are watching home videos. Are they actual Kyotoites? Those were things taken from real families?

S: Some are family films with their precious memories and I also borrowed archives kept by people who reside in the local area used by Randen.

J: How did Keifuku Randen tram company get involved?

S: Keifuku Randen company never asked us to make a film. It was like our one-sided love for Randen. To start with, they were dubious about us – why we wanted to make a film about the trams. That’s why we had had no tie-up or full co-operation with them, we just filmed without causing disruption to their timetable and passengers.

However, after we made a request for them to operate a specific tram at specific time on a specific day, the company developed an understanding that we were working seriously on making the film and started to support us. But we never stopped any trams.

There was only once, for a scene in the fantasy. We were allowed to shoot inside a tram for 2 hours while it was stationed at a platform after finishing its operation for the day. We could only manage to shoot using a basic cutback/cutaway though. We also filmed scenes inside an actual running tram that we had paid for. We shot the scenes while the tram was operating between its departure and final station.

J: When you first started shooting without the help of the tram company, was it hard to get scenes perfect? Because you had to have a specific tram arrive at specific time?

S: Yes, it was hard. I hadn’t experienced moving a train to fit in with shooting and there was nothing for me to compare it with… It was rather difficult to make a decision, if we should wait for the next tram or just compromise and use what we shot, because it took an hour for the same tram to come back to the place where we were. However, actually, everyone’s concentration was rather high, so I think I could draw advantages from the circumstance.

I think we might be able to approach an essential idea that can be attributed to the film better when we can’t control the situation. It would be better for film-making when we say “I can’t control everything”. There might be a future for films only if we have restricted situations.

S: Oh Certainly! Fate is a very important theme of this film. I don’t want to use the word but actually it is an important keyword. I have just thought right now that it was actually unexciting as we already knew which tram would come next. I mean, Randen operates trams with different colours but we knew beforehand what colour tram would come next as we had requested information the day before. But, with hindsight, it might have been better shooting without knowing it.

J: Your script features many different scenes that segue between reality and dream. How difficult was it to write?

S: Maybe I didn’t separate them like, “is this reality or isn’t it?” in my head while I was writing the script. But I thought, from my experience, it would be risky if we shoot the film with a script written only from my point of view. So I delegated to [Hiroshi] Asari-san, who joined our team as a chief assistant director, to amend the final draft of the script.

It was not quite rewriting… it was something like adding lines or perhaps translation. He understood well what I wanted to do and translated it on my behalf. He would intercede like, “It would be easier to convey what you want to say to others if there were some additional lines like these here”.

J: The most fantastical elements are the Tanuki and Kitsune. Is that a real legend?

There was a great author called Kenji Miyazawa who wrote a story about trains for children. Have you heard “Night on the Galactic Railroad”? And also a novelist, Taruho Inagaki, who spent his later life in Fushimi in Kyoto. What they wrote connects to music by Morio Agata [Randen’s composer]. They wrote about a unique sense somewhere between nostalgia and future. The fantasy I have drawn from by including the Kitsune & Tanuki might be closer to modernism although it differs from retro-future.

My definition of fantasy is not something beyond a door or filter, th 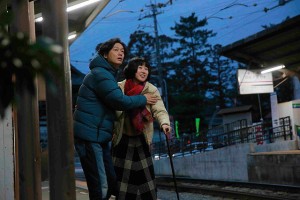 ere is no switch between reality and fantasy. For example, you might have a partner and might be troubled with her/him. You could be walking whilst thinking about it, then look up at the sky. Suddenly your reality could have turned into something different.

For example, films by Theo Angelopoulos, the Greek director, are often shot in extremely long cuts. In his films, some strange thing would happen within one cut, a decade might suddenly fly by within one cut. I think his technique could connote all methods of film-making. Things we see now are already only an illusion.

Maybe I want to make something fuzzy. I want to make films like a rare animal or things without clear definitions but it might be very risky as I don’t know how much an audience would understand it.

J: It is really entertaining. It’s like entering a dream. My final question, what is your memory of Randen?

S: In the film, you will see a station called Katabira no Tsuji, where there is the 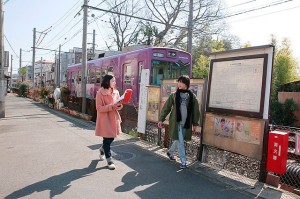 junction between the mainline and Kitano line. When I was a university student, a time when Kyoto was still an unfamiliar place for me, I heard a song titled “Waiting for an Alien at Katabira no Tsuji”. It was composed in the 80s’ by Morio Agata who did the soundtrack for “Randen”. It was the first time for me to hear the name of the station and I didn’t even know it was one of the stations visited by the Randen trams but with this film, I could make the connection between them.

In the film, I used a real legend (link to the legend), not a made up one, about Katabira no Tsuji. The name Katabira no Tsuji was derived from the legend. I have borrowed this tale in the film. The image of the legend was overlapped with the scene at the subway of the station.

I feel now as if my mind has been left sleeping there (in the subway in Katabira no Tsuji). That place is a key part of the film, I think the heart of “Randen” could be there. This long journey of making the film had started from the song. It was the song and the legend about Katabira no Tsuji that kept encouraging me to make this film. I have tactfully merged a scene that indicates the legend into the film.

I think to make a film in a particular town means to make a film of the area. My desire to get closer to the heart of the area, which is not visible, would be an important method/step to capture the area itself. The purpose of the film was to shoot the area and to search for the legend was one of the steps.

Here’s another interview (in Japanese) at another site called Cine Reflect but this time it’s with lead actors Arata Iura and Ayaka Onishi. It’s done by a colleague named Yumi who also asked more questions to the gang plus more involved in the film for an interview on her own site.