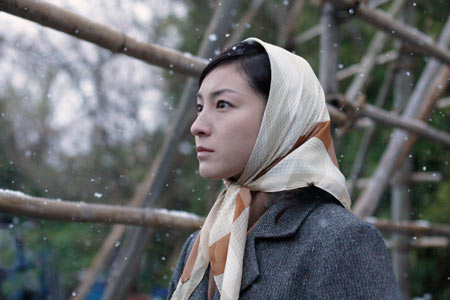 I hope we are all good!

I have reached the end of another 12-day work run and I’m finally catching up on my rest. In that time, I am watching Japanese films!

My review for Lying to Mom (2018) was published over at V-Cinema which wraps up my coverage of the New York Asian Film Festival there, however, it continues on this blog. I posted reviews for the Sabu film Jam (2018) and the Japanese drama 5 Million Dollar Life (2019). Expect more film reviews soon as I catch up with other titles. 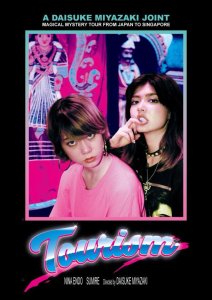 Daisuke Miyazaki is a director to watch. With a distinct set of indie films that includes Yamato (California) (2017) and Tourism, Miyazaki has something to say about modern life and youth culture and he shows no signs of stopping. Tourism was the second of a two-part video installation commissioned by the ArtScience Museum in Singapore and Singapore International Film Festival that blossomed into a feature film that could be the first instalment of a longer series. It’s quirky and features a winning performance by Nina Endo. Here’s my review of the film and here’s a link to an interview I did with director Miyazaki at last year’s Osaka Asian Film Festival.

Synopsis: Nina and Sue live with a male room-mate in a sharehouse somewhere in Yamato City, Kanagawa Prefecture. Life is quiet and somewhat uninspiring for the three. Like many young people, they work part-time in stores like Tsutaya and Book-Off, study in their spare time, and chase vague dreams of a better life. However, some unexpected excitement enters their world when Nina wins two tickets for a free trip abroad. A different locale might usher in some excitement and so she departs for Singapore with Sue and what she gets is a true tour of the place.

Two documentaries by Hiroyasu Murakami are released in cinemas and they cover the people and things found at the tidal flats around Tokyo’s Tamagawa river. 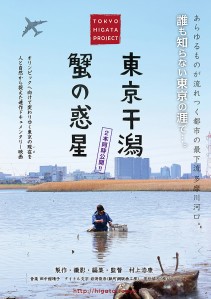 Synopsis: A homeless elderly man in his 80’s lives near the estuary of the Tamagawa River and has spent more than a decade in the area. His companions are abandoned cats he has taken in over the years. He catches crabs and farms clams but has a rule that they must not be juvenile ones. However over-fishing by some people has led to a decrease in the number of clams and redevelopment of the area for the 2020 Tokyo Olympics has led to a bridge and high-rise hotels being built along the tidal lagoon. Through this elderly man who has lived and is living through a vast series of changes felt by Tokyo, audiences will experience a little some of the various problems facing modern Japan such as environmental destruction, an ageing society, pet abandonment and inequality. 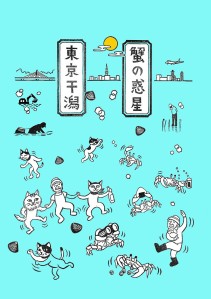 Synopsis: Yui Yoshida observes the many different crabs in the tidal flats of the Tamagawa River estuary.It is rare to see so many crabs in a large city, and Yoshida, who has been observing crabs independently for 15 years, visits tidal flats every few days and records the ecology of the crabs. The documentary goes out on a tour the tidal flat with Yoshida and looks at the amazing activities of the crabs. 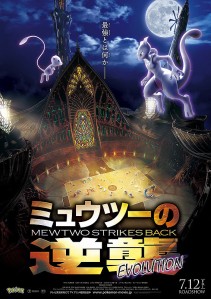 Synopsis: Giovanni, the leader of Team Rocket, had ambitious plans to take over the world, involving his latest experiment, a powerful clone of Mew—Mewtwo. However, Mewtwo escaped from the lab and plans to take over the world by creating a fake event for Pokémon Trainers to participate in. During this event Mewtwo reveals its plan to create powerful clones of all of the Pokémon taking part and rebelling against human control. However, Satoshi’s love of his Pokémon will prove too powerful to break and the mysterious Mew returns… 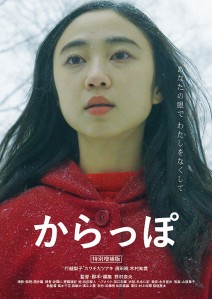 This is a special edition of a film released last year. It comes with an additional scene and re-editing. Selected films from the Tanabe Benkei Film Festival Selection 2019 are being shown in different cities (June 19-, Tokyo Theatre Shinjuku / July-Osaka Cine Libre Umeda).

Synopsis: Nao Nomura makes his feature film debut with this, a graduation work from Musashino Art University and it won the Entertainment Award at the Pia Film Festival Award 2018. A young lady who works numerous part-time jobs to make ends meet falls in with a painter who wants to use her as his muse. She agrees but she feels uncomfortable and begins to get cold feet which is when she meets writer who also wants to use her as a muse. House-hopping and being looked after can’t hide the emptiness she has inside… 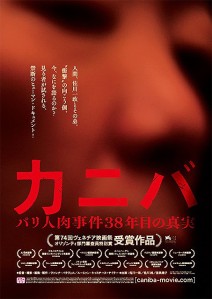 This documentary has toured the festival circuit since it’s debut in Venice last year.

Synopsis: Not a Japanese film but there is a Japanese person at the heart of this documentary, Issei Sagawa, a man infamous around the world for killing and then partially eating fellow student Renee Hartevelt at the Sorbonne in Paris, 1981. Due to his father’s intervention with a lot of money and a top lawyer, he managed to avoid jail time and was declared insane. He may have avoided one type of prison but he lives in another: having to live his life with everyone knowing he committed an act of cannibalism. Since nobody wants to work with him in a regular job and he can only get work recounting his horrific crime in manga, pink films, and magazine article, he is stuck in that role. He tells the audience that it is a terrible fate. This documentary doesn’t condone his deeds or the media-circus around him but seeks to explore his life, especially his background and connection with his brother Jun, who now acts as a carer of sorts. I’ve added this to various film festival posts because I read a really good review of it – very well-written.

Here is a clip and an interview with the filmmakers:

Okazu-kun in the Ad Agency’s Men’s Dorm: The Movie 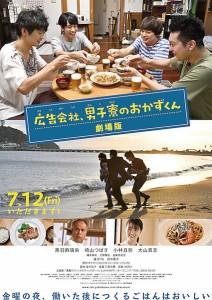 AH, this takes place in Enoshima. I went there earlier this year. Alas, it was raining a little so I was a bit wet and also very tired after working non-stop in Britain and then travelling to Japan and dealing with jet lag and travelling 9 hours by slow train from Osaka to Tokyo. However, later that day, I visited some friends at their place in Roppongi and got delicious home-cooked okonomiyaki and other delights, which immediately cheered me up. Eating with friends and family is very important.

Anyway, this is based on a TV show.

Synopsis: Kazu (Mario Kuroba) works for an advertising company and lives in a company dormitory with others including Keisuke (Tsubasa Sakiyama), Ippei (Katsuya Kobayashi) and Tadashi (Masashi Oyama) and while life in the world of advertising can be stressful, the group have found the perfect antidote: sharing dinner together!

Kazu will have to miss dinner one week because he is on assignment in Kamakura, his job being to make brochures advertising the restaurants in Enoshima Gourmet Town. It’s an uphill battle for the adman because a lot of the restaurants are small and have no idea about advertising and one Italian restaurant, run by a guy named Tomokazu (Yoji Tanaka), proves nearly impossible to add to the brochure especially as Tomokazu kicks Kazu out of his place but there is a chance: Tomokazu has a daughter who understands the importance of advertising her father’s restaurant. 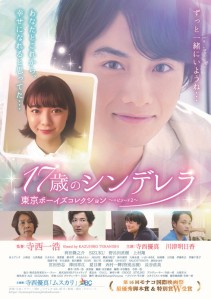 This is the second feature film depicting Tokyo Fashion & Music Event “Tokyo Boys Collection” and it stars Yuma Teranishi from “the handsome general election” and Asuka Kawazu who also served as the exclusive model at the grand prix of the popular fashion magazine “Seventeen”. No trailer.

Synopsis: oi (Asuka Kawazu) is a 17-year-old girl who auditions to appear in the Cinderella General Election of the Tokyo Boys Collection, which is a gateway to the entertainment world. She is aiming to become an actress, having been influenced by her childhood idol Haruki (Yuma Teranishi), but suddenly discovers she has cancer. Despite this, she does not give up on her dreams and tries to challenge the Cinderella General Election.

A short film by Akira Kawachi, a young filmmaker who was awarded the “20th CHOFU SHORT FILM COMPETITION” Grand Prix for Hikari Kankei, a film released last weekend at Ikebukuro’s Cinema Rosa, where four works by up-and-coming filmmakers Akira Kawachi and Tsuyoshi Matsumoto are being shown.

Synopsis: The main character has an older brother who lives in a remote part of the country who is rumoured to be able to see the future with his eyes. One girl visits to see the future but people find things go in a different direction from what they wanted.

This is a remake of a film Matsumoto made in 2014 which was screened last weekend. The remake won an award at the Pia Film Festival 2018. You can watch a trailer for the film here

Synopsis: Two girls, Akane and Haruka, go to different schools in a small country town. Haruka is in love with Akane but also has a sense of superiority over her. Over the course of a day in early summer, adolescent girls transform into adults.