Masaharu Take has a knack of making good character-driven dramas as exemplified by 100 Yen Love (2015) which cemented Sakura Ando as a real headlining acting talent after she spent years impressing auds with steady work in smaller semi-comedic roles (For Love’s Sake, Love Exposure) and indie dramas (Our Homeland, 0.5mm). This film, an adaptation of a novel, offers Nijiro Murakami (Destruction Babies) a meaty role to make a name for himself.

The film opens with what appears to be a suicide one rainy night. Blood pours out of a shattered skull onto a rain-sodden riverbank. The titular gun, a .357 Magnum Lawman Mk III, is lying next to the body. The camera caresses its smooth, short, shiny and curved form and soon someone will lavish the same attention on it.

END_OF_DOCUMENT_TOKEN_TO_BE_REPLACED 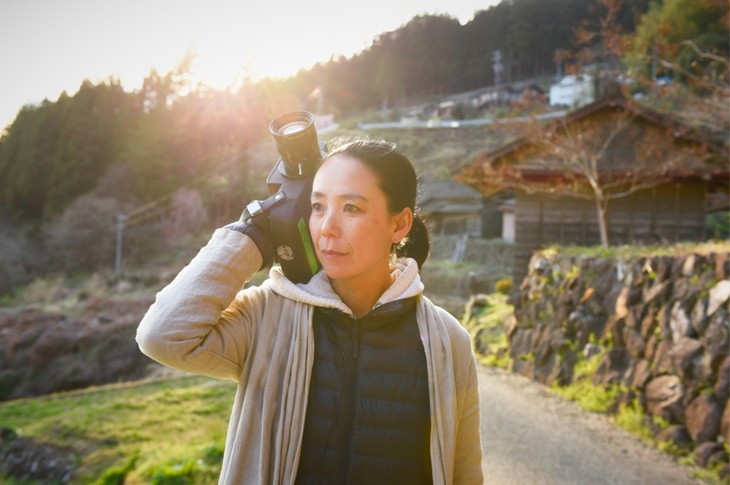 END_OF_DOCUMENT_TOKEN_TO_BE_REPLACED

If you travel to Kyoto then it is recommended you try travelling from scenic Arashiyama to the bustling city centre by the Randen trams. They cut through many areas and they prove to be the perfect setting for three intersecting stories in a film.

Quite unlike many other films screened in 2019, Randen revels in creating a

magical atmosphere of heightened romance and folktales that could only take place in Kyoto. It was the opening film of the 2019 edition of the Osaka Asian Film Festival and it will play on the final day of Japan Cuts 2019 in New York. I had the chance to interview the director of the film, Takuji Suzuki, at Osaka and he revealed how the film was a put together with love and care by his team which included Kyoto University film students and local people living along the Randen line.

END_OF_DOCUMENT_TOKEN_TO_BE_REPLACED

Welcome to the weekend, everyone. I hope everyone is safe and well.

We’ll start the post with some sad news: Dutch actor Rutger Hauer has died. I came to know of his work through his roles in Blade Runner and The Hitcher when I was a teen and I can quote lines from both movies. It is as Roy Batty that I’ll always remember him as he gave his replicant character a fierce humanity and a black sense of humour and played him so hard he ended up being more human than the humans.

A week has passed since the deadly fire at Kyoto Animation and I’m trying to arrange a special screening of some kind for the anime fest I work for to pay tribute to the studio and those harmed on that awful day. I’ve also donated to one of the funds set up to help Kyoto Animation heal after the disaster – here are two links, one to Anime News Network and a report on a way to do direct bank transfers to Kyoto Animation and another to Sentai’s GoFundMe campaign.

In terms of films, I published a post about the two Japanese films at the Locarno Film Festival and reviews for films at Japan Cuts 2019, all of them made in 2018 – The Kamagasaki Cauldron War and The Miracle of Crybaby Shottan on this blog and my reviews for And Your Bird Can Sing, Orphan’s Blues, A Japanese Boy Who Draws and the New Directions in Japanese Cinema films which were published on V-Cinema.

Festival coverage will continue for both  Japan Cuts and the New York Asian Film Festival and that will take me into the autumn festival season. Expect a post about Venice, and the Open City Documentary Festival rather soonish.

END_OF_DOCUMENT_TOKEN_TO_BE_REPLACED

The Miracle of Crybaby Shottan

Considering Toshiaki Toyoda made his entry into Japanese films with low-budget punk titles about outsiders like Pornostar (1998) seeing him take on a film about shogi, or Japanese chess, is something of a surprise until you find out that he initially trained in shogi as a child. That, and the lead character of this biopic, the titular crybaby Shoji (Shottan) Segawa, was an outsider and trailblazer himself when he became a shogi professional well past the age when it is acceptable.

END_OF_DOCUMENT_TOKEN_TO_BE_REPLACED

Kamagasaki is a slum-like part of Osaka’s Nishinari district which is notorious for having a high concentration of day labourers, homeless and a history of civil unrest, not to mention its proximity to the Tobita Shinchi red-light district. When I lived in Japan and moved from Tokyo to Nishinari I was given warnings and advice from friends. The way some people talked about the history of Kamagasaki made it sound anarchic and dangerous. By the time I got there things had become tamer thanks to gentrification driven by the boom in tourism and my experience was positive. Indeed, as soon as I was off the train a day worker with a sunny disposition struck up a conversation and offered to buy me a drink before my landlady rescued me from the surprise invitation and showed me around the district. They were the first of quite a few residents who took the time to talk to me and dispelled myths by telling me different stories of a poor but proud community who have had to fight for their human rights and dignity. The history and feel of Kamagasaki is strong and director Leo Sato has managed to bring it to life in his debut feature fiction film which creates a feel for the place.

END_OF_DOCUMENT_TOKEN_TO_BE_REPLACED

The Locarno Film Festival runs from August 07th to the 17th and they have announced their selection of films. There are two Japanese films in the mix. Here they are!

END_OF_DOCUMENT_TOKEN_TO_BE_REPLACED

Welcome to the weekend.

I want to start this trailer post by offering my condolences to the people at Kyoto Animation studio for the terrible tragedy they suffered with the arson attack.

It sounds so awful. I’ve used artwork from series made by them on this blog since it started and I work for an animation festival so I’ve come to watch and appreciate their works. One of the best screenings we had was for A Silent Voice where the audience was profoundly moved by the human drama on screen. Near all of us were in tears at the end. I think back on that screening and want to thank the folks at Kyoto Animation for making films and shows that help people connect with their shared humanity and I hope they can recover as best they can.

At the start of the week I posted about a series of special screenings orchestrated by the Tanabe Benkei Film Festival in Shinjuku. I then posted my review for the Nobuhiro Yamashita film Hard-Core, a tragi-comedy about outsiders and then a review for the super-excellent NDJC short film Last Judgement which plays in a free screening at the Japan Cuts festival of Japanese film in New York. I’ve been busy writing reviews for Japan Cuts. Three have been published on VCinema: The Kamagasaki Cauldron War, The Miracle of Crybaby Shottan, and the 2019 NDJC shorts. One of today’s Japan Cuts screenings is for the film Whole which I saw at the Osaka Asian Film Festival.

END_OF_DOCUMENT_TOKEN_TO_BE_REPLACED

New Directions in Japanese Cinema (NDJC) is a programme that has been in operation since 2007, it’s purpose being to help foster talented young filmmakers through workshops and the production of 30-minute narrative shorts, shot on 35mm film, with the help of experienced professionals. The resulting works are given screenings across Japan and at major festivals. I had covered their films in old trailer posts¹ but had never seen a whole programme until this year…

It was coming up to the end of the 2019 edition of the Osaka Asian Film Festival and there was a screening of this year’s NDJC titles early one morning. I was quite eager to see them and was truly thrilled by the final title, Final Judgement (Saigo no Shinpan) by Shinya Kawakami which is, hands down, the best of the bunch.

Inaba (Ren Sudo) is a talented artist who has tried and failed the entrance exam to Tokyo Art University many times. He is on his sixth attempt and has decided to make this year his final challenge. As he prepares to paint a portrait to pave his way into the institution, a very gifted rival named Hatsune (Miru Nagase) appears amidst the students and her unconventional methods and tremendous vision creates a work which roars with energy and snares the attention of everybody including their tutors. Inaba is incensed by this girl (who is still in school, no less!) but, at the height of his anger he takes a left turn and invites Hatsune to a cafe to find out how she is such a great artist…

END_OF_DOCUMENT_TOKEN_TO_BE_REPLACED

Nobuhiro Yamashita is a director who has a particular forte for downbeat stories, whether they are slacker comedies or dramas, most of which contain misanthropic and misaligned characters who make for uncomfortable ye

t interesting leads (think The Drudgery Train). Here, he adapts an obscure manga from the early 90s by writer Marley Carib and illustrator Takashi Imashiro where the characters and the story are sometimes bizarre, sometimes sorrowful but secretly gentle, all of which plays out in a slow and uneven story.