It’s not often that Korean animation gets screened so the “Dreaming Korea Animation” animation event is a special one and it takes place really close to Ikebukuro Station! 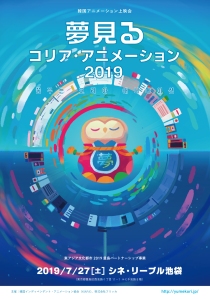 “Dreaming Korea Animation” is a one-day event held on July 27th, 2019 at Cine Libre Ikebukuro and there will be a number of films and music videos screened across three programmes. There are guest animators in town to do talks with two from Japan and three from Korea so this makes the event a brilliant chance to see some of the creativity on offer from Korea.

Ahn Jae-Hoon is one of the directors of the Korean animation studio Meditation With a Pencil. They released their first feature length film Green Days in 2011. Their subsequent feature film projects were animated adaptations of Korean short literature titles, The Shower being their latest work. It receives its Japanese premiere at this event.

Starring: No Kang-min (The Boy), Shin Eun-soo (The Girl)

Animation Production: Meditation with a Pencil

This has been described as a beautiful animated film and it is based on a classic Korean short story of a tragic adolescent love by Hwang Sun-won. It is supposed to be simple so it might be best to go into this expecting luscious visuals rather than plot.

Synopsis: A little girl who often plays at a brook draws the attention of a shy little boy who hovers around her but lacks the bravery to talk to her. Not impressed, she picks up a pebble, turns around and throws it at the boy and shouts, “You fool!” This is the start of something deeper because, as the two explore the surrounding countryside on different days their feelings for one another grow and, one day, a sudden rain shower brings them closer together but…

Sunao Katabuchi (Black Lagoon, In This Corner of the World) will hold a conversation with Ahn Jae-Hoon so this is an exciting opportunity to hear one of Korea’s great film-maker’s speak on the craft of animation.

If you know the name Yeon Sang-ho it will probably be because of his live-action works Train to Busan and Seoul Station. He started his career in animation and his most famous animated films are The Fake (2013) and The King of Pigs (2011). He will be at the festival with three shorts made between 2006 and 2012:

A video message from Yeon Sang-ho will be shown to audiences in this section.

Hoji Tsuchiya (Vimeo filmography) is an artist and popular director of shorts and music videos. He works on Planet Family at NHK Educational Television (more of his filmography) and has won many awards. He will be hosting a compilation of 11 music videos from Korea and Japan and also conducting a talk with two Korean directors, Han Ji-won and Lee Jong-hoon. Hoji Tsuchiya is also going to have a video played, “A Long Dream”

This one is particularly interesting because you get to see works by Sarina Nihei! She worked on “Fenn” for the musician Tom Rosenthal