The Kanazawa Film Festival 2019 will take place this year from July 12th (Friday) to the 15th (Monday) at 21st Century Museum of Contemporary Art, Kanazawa. 26 films from 132 submissions have been selected and will be screened over three days and all are in the running for the Grand Prix and Audience Award among other accolades.

This is a very badly translated series of film synopses of really obscure indie films but I find that there may be some value later. Sometimes, when doing trailer posts, I find myself linking to the Kanazawa Film Festival post from 2017 because directors may have had their works screened there and since I want to explore indie films, posts like this work out pretty good because it fulfils my general goal with this blog. Right, I hope you and I get some use out of this information and from the images, all of which have been taken from the film festival’s website.

Here is a run-down of the films that will be screened:

The opening film on the 12th is…

I have been following the website of the director for quite a while now and it’s full of neat posts that show the creativity, especially the sketches and designs! These are always fun to looks at.

Indie films are bursting with the sort of charming lo-fi creativity that is easy to relate to and respect and this one is no different. The film’s set production and props and lighting sell the world created. The shooting of the movie took place entirely in the living room of a rented apartment and is full of handmade props that sell the world of the film.

Synopsis: Deep underground is a train that travels long distances. Travelling in this underground world is not that exciting because there is only darkness outside so the passengers are getting very bored …

Director: TANYŪ was born in Kanagawa Prefecture in 1996. She studied painting from childhood and started making films in junior high school.

Synopsis: A lonely and depressed man who works as a delivery drive finds his melancholy days are brightened by the possibility of love when a new woman enters his life but…

Director: Yuta Nemoto was born in Saitama Prefecture in 1993. He works for a real estate company and, in his spare time, he makes movies and music.

Synopsis: Billed as an “Islamic Thriller”, the story concerns a man and a woman who have lived together for half a year but find themselves divided by religion when he returns from helping his mother who had fallen and he has converted to Islam…

Director: Born in Tokyo in 1994, Sheik M Harris is half-Japanese and half-Pakistani. He started film-making in university and is currently studying at the New Cinema Workshop while working at a cinema in Tokyo. 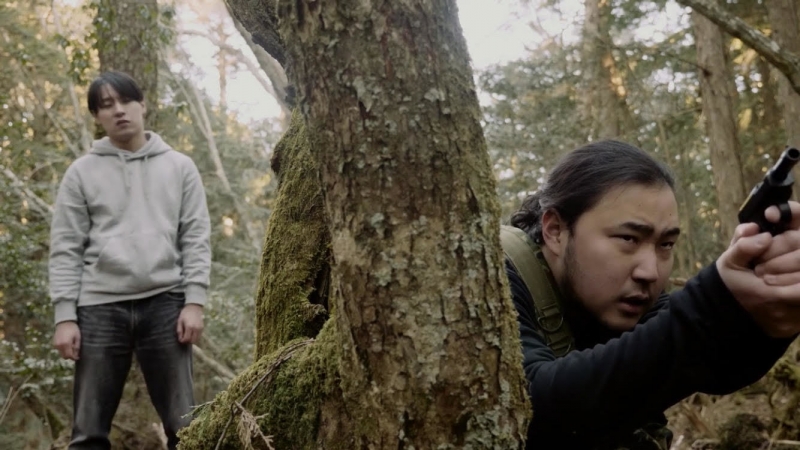 Synopsis: A man who wants to commit suicide heads to the mountains where he meets a man who rescues him while desperately fighting against something in the wilderness.

Director: Arisa Mabuchi was born in Tokyo in 1995 and became a director of the movie club at Aoyama Gakuin University where she started to make independent films. She graduated this March.

Director: Ryota Koyama was born in 1984 in Tokyo. He has worked in V-cinema and indie films and has two films in the fest.

Synopsis: A strange story about a hikikomori and a yakuza who are surrounded by strangers in the city.

Synopsis: A man who runs a small town factory and some police officers who are more likely to break the law are brought together by “a thing”.

Synopsis: Three former bikers are drawn back together on the anniversary of their friend’s death. Their reconnection reminds them of their former youthful behaviour…

Director: Nobushige Suematsu was born in 1983 in Tokyo and started his career in the film industry as an actor. He has appeared in numerous films, theatre productions, commercials and artist’s PVs.

The opening film on the 13th is…

Synopsis: Shun and Yuki are getting married soon and live in a rundown share house, with neighbours including a Chinese student. Kiyoko, Shun’s ex-girlfriend, shows up and starts living in the house and he begins to suffer from pressure and despair.

Director: Sho Fujimoto began working in theatre in 2012. While studying sculpture at Kanazawa College of Art, Fujimoto directed several plays and participated in theatre festivals with various pieces. He also works as a music composer for theatre performances and travelled to Russia and Korea to perform his music. In 2017, he transferred to Musashino Art University to study film-making. He currently works in design and video images at a production company.

Synopsis: Hime and Muruko are two 30-year-old women with no boyfriends. They head to bars in search of men. It’s a persistent struggle which

Directors: Chika Kuboyama was born in Fukuoka in 1987 and works as an actress. She has appeared in many films including A Crimson Star (2018).

Rosa Yamamoto was born in Tokyo and works as a model and actress. Her appearances include Dias Police (2016) and Hard-Core (2018).

Synopsis: A man returns from Tokyo to the family’s sake shop. As he and his brother spend time together, two sense something is different and are puzzled by the ever-changing present.

Director: Hakuto Daiichi was born in Tokyo in 1996 and has worked as an actor since the age of 17. This is his first directed work based on a screenplay. 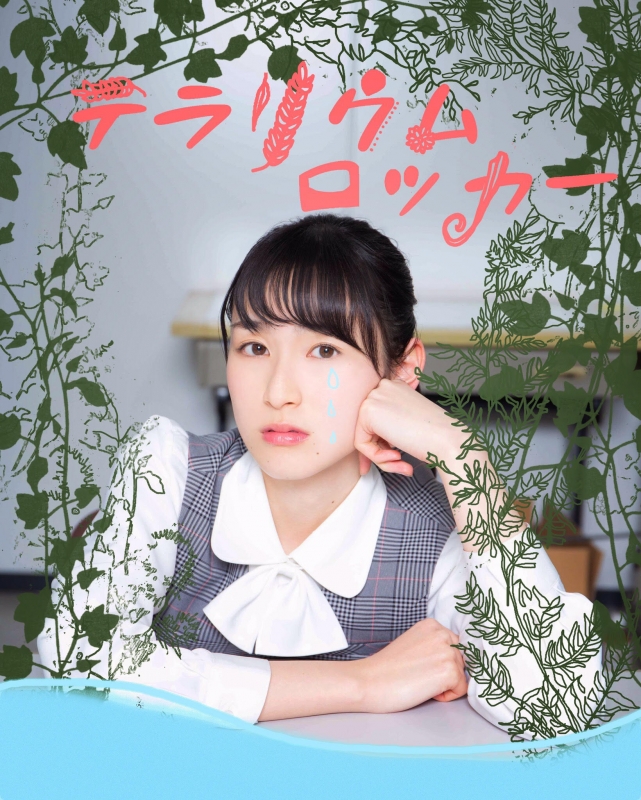 Synopsis: An office-lady working in a third-rate trading company finds her only happiness is the “terrarium” which she has in her locker and in which she has secretly grown plants. It heals her heart but when she meets a gardener with a strange aura…

Director: Rika Katsu was born in Aichi Prefecture in 1992. She started acting in high school and started making films in university. She currently works as a manga editor at a publisher.

Synopsis: Komachi Ono was a real-life poet and in this film she is a person who does not exist in history. A girl visits her aunt’s house in Yuzawa City, Akita Prefecture and she meets the ghost of Komachi. The hidden history of Komachi is uncovered while travelling around the city of Yuzawa.

Director: Ohno Kandice Mana was born in Chiba Prefecture in 1998 and is currently studying at Tokyo University of the Arts. She was affected by film from a young age, with an especial love for the works of Tim Burton. This is the first movie she has made.

Synopsis: This documentary follows the director searching his family history:

I was born in Yanji, China, and I moved to Japan when I was 10 years old. When I reach 20 years old, I started looking for my father who was a painter. I ask my relatives in China about where my father is, but no one knows…

Director: Ryuichi Tsunoda was born in China in 1993. A graduate from Niigata Prefectural University, he shot, and produced this work and later edited and completed it while spending six months at Daitokuji Temple in Kyoto.

Synopsis: A girl who loves her mother despite being abused by her. The mother has a history of being abused. A criminal enters their lives and they attenot to live together like a real “family”.

Director: Yudai Uenishi was born in Osaka in 1964 and works as an actor, scriptwriter, representative of entertainment production and more.

The opening film on the 14th is…

Synopsis: A woman who has been cheating on her boyfriend is fired from her job. Her lover is untrustworthy and her boyfriend hurt. Three people’s stories are told.

Director: Yuta Kurosawa was born in Miyagi Prefecture in 1992 and has experience with ENBU seminar in the production of movies, commercials and music videos.

Synopsis: A man who gets information that an old lover who he thought died in an earthquake is alive goes to Yokosuka based on that information…

Director: Nobukazu Ootsuka was born in Nagasaki Prefecture in 1980. After graduating from university, he studied under Kazuhiko Hasegawa. He began preparing for this film before his children were born. His son is now 4-years-old.

Synopsis: When his brother commits a crime, a man finds his family is shattered as his father commits suicide over the issue and the mother leaves home…

Director: Ryo Katayama was born in Fukui in 1980 and works as an actor. He has appeared in films like Ringside Story (2017), directed by Masaharu Take. This is his feature-film debut. 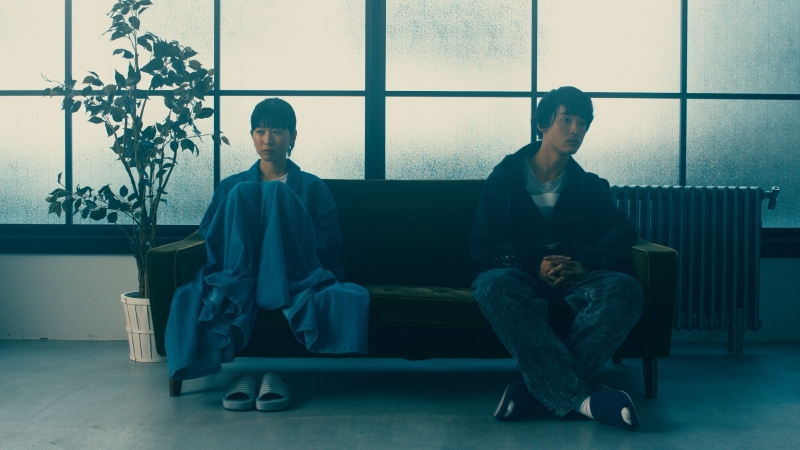 Synopsis: Can you change your destiny?

Can you change people?

An omnibus movie of three episodes on the theme of “Can you change people?”

Director: Koji Uehara was born in Osaka in 1978 and this is his directorial debut.

Synopsis: Miyata Busters, Inc. is a company which protects the citizens of Japan from space creatures but with the advancement of extermination technology, the demand for the company is falling steadily. That is, until the arrival of a new kind of space creature that is not affected by the latest equipment!

Director: Atsushi Sakata was born in Osaka in 1999 and works in various aspects of film production.

Synopsis: A middle-aged man gets caught up in a Yakuza struggle and is buried in a mountain. It turns out that the burial site is land cursed by the mud gods and the man comes back as a mud monster… “Mudman”.

Director: Taro Yamanaka was born in Hyogo Prefecture in 1993 and works as a freelance video producer. This work is his first feature film.

The opening film on the 15th is…

Director: Shi Yuasa was born in Osaka in 1996 and a graduate from the Department of Image Arts at Osaka Art University. He currently works as an assistant at the university.

Director: Atsushi Nakamura was born in Toyama Prefecture in 1993. After quitting Fuji TV, he set up a theatre company called Aogane.

Synopsis: A human drama based on the director’s own experiences and questions over the form of love and sex. A woman who wants to be embraced by a man who cannot be embraced because he loves.

Director: Kosei Hana was born in Hiroshima Prefecture in 1992 and attended the Film School New Cinema Workshop Creator Course. He works as a production director for WEB and TV commercial production.

Synopsis: A story of fear and love where a mysterious man who suddenly appears in the living room of a house makes a woman’s life go crazy.

Director: Kazuhiro Taira was born in Okinawa Prefecture in 1989. He makes local dramas but aims to become a film-maker.

Synopsis: Kuniaki Kamiya endeavours to tell an Okinawan story with Okinawan actors and the story concerns a young man who lives at the bottom of society.

Director: Kuniaki Kamiya was born in Okinawa in 1988. He currently works at a movie production company in Okinawa.

Synopsis: A tale of horror where an idol who is bad at singing is abducted by the suspicious voice trainer Mipo Rin.

Director:Daiju Matsumoto was Born in Hyogo in 1983. This work is her first self-produced film.

Here is the timetable for the films: 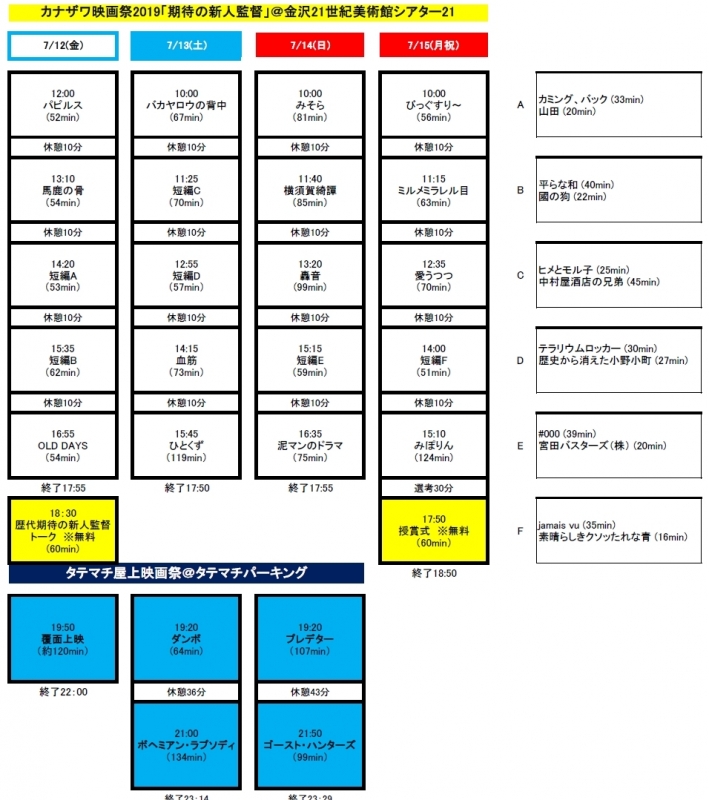 Tickets went on sale on Sunday 09th June and can be bought at Kanazawa’s 21st Century Museum of Contemporary Art’s shop and it’s a good idea to buy in advance since they only cost 1000 yen. Tickets are 1200 yen on the day.